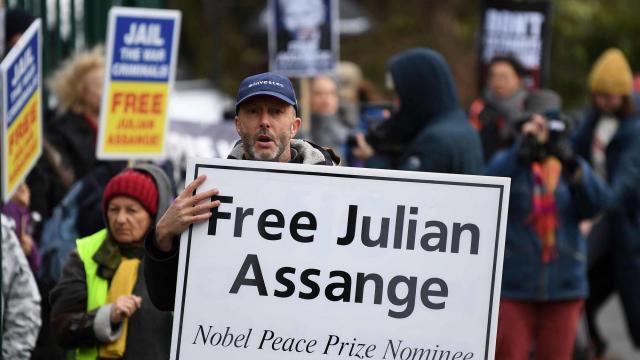 CNN — US President Donald Trump is trying to "make an example" of Julian Assange, the WikiLeaks founder's defense team argued in a London court Monday at the start of his extradition hearing.

By publishing a trove of classified defense documents relating to Iraq and Afghanistan, Assange had revealed evidence of war crimes, his legal team said.

Lawyers for the US government argued that by publishing the diplomatic cables in an unredacted form, Assange had put the lives of sources and informants in "immediate" danger, and damaged the capabilities of US forces carrying out operations abroad,

Assange, 48, was arrested on a US extradition warrant in April last year at the Ecuadorian embassy in London, where he had lived since claiming asylum there in 2012.

He faces 18 charges in the US for his alleged role in encouraging, receiving and publishing classified documents linked to national defense. If convicted, he could be sentenced to up to 175 years in jail.

Counsel for the US government, James Lewis, told Woolwich Crown Court, that Assange could not use journalism as an excuse for hacking. "Reporting or journalism is not a license for criminality," Lewis told the court. In any case, Assange was not entitled claim a journalism defense, as he was not a journalist, Lewis argued.

Lewis said Assange had previously conceded that the publication of names was regrettable. But the lawyer said that "what is alleged is far more than regrettable -- it's criminal."

Lewis told the court that the charges against Assange were not linked to his publication of evidence of any war crimes, but instead related to "publishing specific classified documents that contained unredacted names of innocent people who risked their safety and freedom to aid United States and its allies."

Representing Assange, lawyer Edward Fitzgerald said asking for extradition on the basis of what was "clearly" a political case was an abuse of the court's process.

"Julian Assange is being made an example of. President Trump and his administration decided to make an example of Julian Assange," Fitzgerald said, adding that Assange's actions had brought evidence of war crimes to public attention.

At a preliminary hearing last week, Fitzgerald said that former US congressman Dana Rohrabacher had offered the WikiLeaks founder a pardon on behalf of President Trump, in exchange for denying Russian involvement in the leak of emails from the Democratic National Committee in 2016. Wikileaks published the emails in July that year.

The White House and Rohrabacher have strongly denied that Trump intervened in Assange's case. Rohrabacher has previously said the visit was "my own fact finding mission," and claimed he had never spoken to Trump about Assange. White House Press Secretary Stephanie Grisham dismissed Fitzgerald's claim as "a total lie."

On Monday, Fitzgerald told the court that Rohrabacher had approached Assange in the Ecuadorian embassy and discussed a "preemptive pardon."

The former congressman was accompanied on the visit by controversial conservative blogger Charles "Chuck" Johnson. The pair made it clear that they were acting on behalf of the President, who had approved of the meeting, Fitzgerald said.

Assange's defense team said Rohrbacher presented what he called a "win-win" solution, whereby Assange could identify the source of the DNC hack in return for a pardon.

Assange did not identify the source, Fitzgerald said.

Assange's father John Shipton and WikiLeaks editor-in-chief Kristinn Hrafnsson were in the public gallery for the start of the extradition hearing on Monday.

Chants of "no extradition" from the crowd of Assange supporters gathered outside could be clearly heard inside the courtroom.

During Monday's proceedings, judge Vanessa Baraitser asked counsel to pass a message to the protesters outside, warning them they risked harming the case because journalists -- especially those who didn't make it into the courtroom -- were struggling to hear the proceedings.

"I'm having difficulty concentrating, this noise is not helpful either," said Assange, who appeared in court wearing a gray suit, white shirt and gray sweater.

"I'm very appreciative of the public support and understand they must be disgusted by these proceedings," he added.

The extradition hearing is expected to last several weeks.

Assange, an Australian citizen, has been held at London's high-security Belmarsh prison since his arrest.