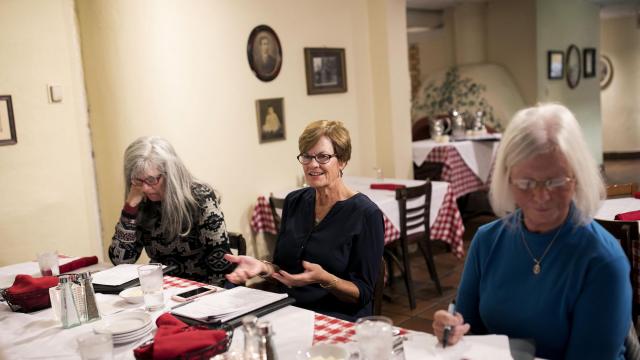 Although they became widows 20 years apart and at opposite end of the age spectrum, Kayla Murdoch and Mary Thomas are strikingly similar in their approaches to their financial lives.

Murdoch, of Manchester, New Hampshire, is a 28-year-old paramedic whose husband died unexpectedly in 2016.

Thomas, of Cincinnati, is a retired schoolteacher in her 80s who lost her husband in 1996.

Both managed to steer quickly past the familiar story of the widow left financially vulnerable when her husband dies, though, by setting their intentions on not only staying afloat independently, but also prospering.

And now, the number of widows like them appears to be on the rise.

According to the Center for Retirement Research at Boston College, the poverty rate among widows is falling. In a study published this year, the center found that 13 percent of widows were living beneath the Census Bureau’s official poverty threshold in 2014, down from 20 percent in 1994. (For a single person 65 and older, the poverty threshold is $11,756).

Alice Zulkarnain, one of three researchers behind the center’s study, said the financial climb was rooted in advances in women’s work histories and education levels.

But widows still have a way to go before they catch up to women whose spouses are still alive, only 2.6 percent of whom are poor, according to the Census Bureau’s figures.

Kathleen M. Rehl, a financial adviser who travels the country offering money workshops to the demographic she refers to as “the sisterhood,” said attitudes like Murdoch’s and Thomas’ may be helping.

“Widows are becoming more confident financially,” said Rehl, 71, whose résumé includes training fellow advisers to work with widows. Her interest in widows is personal: She became one 12 years ago. “Even though I had my own business, I felt like a bag lady,” she said.

Among her goals is to encourage gains in financial literacy through helping advisers understand widowhood’s side effects. “You get Jell-O brain,” she said. “It affects you cognitively. You need to work with someone who knows how to talk to you.”

As Murdoch and Thomas found, though, options for avoiding the feeling of helplessness are not limited to holding the hand of a sensitive, expensive financial adviser.

Personal finance classes held by local organizations and nonprofits like Camp Widow, which offers a workshop three times a year led by Rehl at its retreat for widows, are one option.

Educational finance blogs, including a few that offer solutions to widow-specific money struggles, like the Suddenly Single Survivor Guide, are another.

Local investment clubs are a third.

Eve Lewis, a 64-year-old widow in Milford, Ohio, needed no convincing to join a nearby nine-woman investment club just after she lost her husband to cancer in 2008.

She had nurtured a flair for finance throughout her 25-year marriage. “I would tell my husband about all the different stocks I was interested in, and he would listen,” she said. “But it was really my interest.”

Teaming up with other like-minded women nearby helped her further her investment skills.

“I figured, I have more time now, I’d better join a club,” she said.

The experience has paid dividends beyond the $50 each throws in at every gathering.

“We meet once a month to discuss our portfolio, and everybody has a stock they study, so we have brief reports,” she said. “One of the things we try to avoid is having too many stocks and too little invested in each.”

“Because the market is up, we’re doing well,” Lewis said. But as with the famous Beardstown Ladies, a group of mostly widowed women in Illinois who started an investment club in the 1980s and went on to inspire women across the country with folksy books about smart investing, the goal isn’t just making money.

The three E’s — education, enjoyment and earnings — are the guiding principles, according to Buffy Tillitt-Pratt, a founding member of that group, which still exists despite a dust-up in the late 1990s that led to a lawsuit against their publisher because they miscalculated their annual returns. (A settlement was eventually reached).

So it is with Lewis’ group. “A lot of people think they can’t do this, that investing is too complicated,” said Lewis, whose goal is to maintain what she called her middle-class lifestyle through her investments. “But if you join an investment club, you can learn for as little as $20 a month.”

Thomas credits her family’s multigenerational financial know-how for what she learned at a similar group. Just after her husband died in 1996, a friend from church suggested that she take a class in personal finance at a local university or join an investment club. She decided to join a club.

“The president was a taskmaster. I had to learn fast,” she said. Her willingness to study eventually led to what she called better than average financial gains, and she is now financially secure through investing.

When the group disbanded in the mid-2000s, Thomas wasn’t finished sharing her self-made stock-picking skills. She started a new club. But instead of recruiting acquaintances, she enlisted her four grandchildren, now 22 to 35. Five years ago, they paid for a family cruise to Alaska with club earnings.

“That’s when we really appreciated it,” she said. Zulkarnain said the average age of widows in 2014, the year on which she and her colleagues based their study, was 67.

At 28, Murdoch is an outlier and among a group of younger widows who Rehl said were especially proactive financially. In 2014, before her husband died, Murdoch realized she had no savings set aside after a year of work as a paramedic. She started reading financial blogs, including Mr. Money Mustache.

“It’s a very accessible education in investment,” she said.

Her goal is to retire in her late 30s through a combination of investments and working overtime. “So far, everything I’ve learned through websites has worked,” she said.

She credits a simple strategy — one recommended by lots of investment advisers. “I invest in funds, instead of individual stocks, which means less risk.

“There’s nothing complicated and nothing intimidating about it.”

Pat Steele Nielsen, 60, of Portland, Oregon, also was equipped to handle herself financially when both of her husbands died.

“I had always taken care of the bills,” she said. But when her second husband died last year, the financial terrain was more difficult to navigate than when her first husband died in 1997.

“We had a lot more assets, pension accounts and other accounts that had to be dealt with,” she said.

In addition to finding a financial planner who she felt understood widows, she enrolled in several classes offered by a local company, Lunaria Financial.

“Wild Money,” one such course, “made me face reality in terms of how I’m going to live,” Steele Nielsen said. “It made me look at my priorities, like do I want to travel, or do I want to move, in conjunction with what my income is going to be.”

Steele Nielsen described herself as “the kind of person who likes to keep up on things.” It’s a quality that will serve her well as a widow, said Cindy Hounsell, president of the Women’s Institute for a Secure Retirement, a nonprofit that frequently addresses the financial worries of widows.

Despite what may be an upswing in widows’ actively lifting themselves out of financial straits, Hounsell said most were still struggling. “The ones we see don’t want to be doing investments or anything like that,” she said. “A lot of them are in bad shape.”

Barbara Shapiro, a financial adviser in Dedham, Massachusetts, who started attracting a local following among widows after she became one herself two years ago, is familiar with that type. But she is hopeful.

“Many of the women I see abdicated their financial responsibilities during their marriage and they’re really at a loss,” she said. “They make mistakes. But are they helpless little old ladies? No. They’re asking questions. They want to learn.”

Kathleen M. Rehl, a financial adviser and researcher on widows, offered the following tips for widows who are beginning to make financial decisions independently.

— Beware of financial predators. Often, unscrupulous types to try to sell financial products and services to the recently bereaved. Be wary.

— Take stock. Those emerging from early grief should analyze what they own versus what they owe. “Compare income and expenses, and include bank accounts, savings, retirement plans, other investments and your house. Debts include credit cards, education, car and mortgage loans. Are changes needed now that you’re single?”

— Don’t be a purse. “Family members and others may ask for money. Explain you’re still figuring out new goals.”

— Consider working with a financial planner to build confidence.