Widowed Triangle moms known as 'The Group' lean on each other for support, guidance

Raleigh, N.C. — Wendy Harris replays in her head a good-bye kiss from her husband.

"It's probably the most important memory that I have," she says, before dipping deeper into the feeling 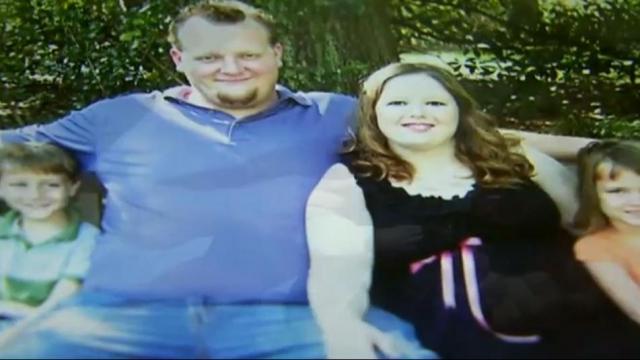 It didn't seem real when she was called to the hospital later that day. Mark had died from a medication interaction.

"I remember holding my stomach and just thinking, 'I'm pregnant' and just screaming, 'No, no, no!'"

Harris's story is horrifyingly similar to others in her widowed wives support group. All are young moms who lost their husbands suddenly.

Katie Darst was pregnant and had a 3-year-old son when her husband, Jamie, died at 33 from an accidental fall while he was on a business trip.

The memory is burned in Darst's mind.

She delivered their daughter three days after Jamie's death. Her mother and sister were with her in the delivery room.

She remembers feeling surrounded by love.

"That was just a real powerful moment of reminding me that I would not be alone and that we would be taken care of," she said. "Knowing she was safe, and that she was healthy, and that she was in my arms, and that I could share some of that responsibility in caring for her with somebody else was a big relief."

Within a week, Darst delivered her daughter and buried her husband.

"You want to honor and hold space for this sadness and this loss, yet you're constantly reminded how much life there is to live," she says.

"I wore Jamie's ring around my neck for a long time, and the first time that I held (their daughter) Maisy, she reached up and grabbed his ring. That was a really special moment to know that he was there with us."

Nicole Capps met her husband, Drew, when they were students at UNC.

"He was my true soulmate," she says.

Together they had a daughter, Olive.

"It fully completed and made us, like, have a family," she recalls. "He was so excited. You could just see it in his face."

The couple was talking about having another baby when Drew died suddenly of a heart attack at age 38. Olive was just 2.

"Not only are you grieving as a wife, but now you're a mom who has to try to explain this to your little girl," Capps says.

"She couldn't grasp heaven, so I would say daddy's in the sky. When we flew on the plane, she assumed we were going to see him in the sky, and she still can't grasp that's not going to happen.

"We were going to go on trips, see friends and family we had kind of not seen for years, and then it was just all taken away."

The women call their monthly gatherings simply "The Group." They say their pain is much more complicated than being sad for the loss of their husbands. They all have to help their young children grieve, too, while life goes on.

"Any loss is a big loss, but it's just different," Wendy Harris says. "Even though you don't want there to be someone else in your situation, it was nice to know there's someone else who gets it."

"It's so much more complicated than like, 'Oh, my husband died. I'm sad,'" Darst says.

"There's a lot of heavy sadness that he's not here, but there's also a lot of joy that he was here and a lot of hope about what's going to be in the future, and he was a part of it because he's a part of our family."

"Having a group of women that understand this and being a mom, having young kids or being younger women going through this ... it's very difficult and they just get it," Capps says.

Each says the group has helped her become a better parent.

"Sometimes I feel like I'm doing this right, and sometimes I'm like, 'Ah ... I'm doing this all wrong," Harris says. "The power of just knowing that there's someone else there who gets it ... is amazing."