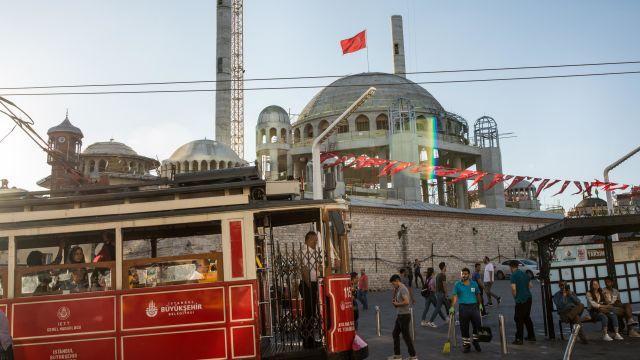 For nearly 10 years now, the flood of cash from global central banks has financed shopping malls in Istanbul, booming cities in China and 100-year bonds in Argentina. Today, many of the malls are empty, property developers in China are riddled with debt, and Argentina has just submitted to a bailout from the International Monetary Fund.

Now, the borrowing binge that fueled rapid growth in emerging markets and piled up returns for their investors is looking like a problem.

Financial experts worry that the turmoil in Turkey, which for the better part of a year has been contained, will spread, following the path of other emerging market meltdowns like those in Mexico in 1994 and Asia in 1997.

“The risk of contagion is pretty high,” said Robert Subbaraman, an emerging market economist at Nomura in Singapore.

The crisis in Turkey has been made worse by a diplomatic dispute with the United States and the mercurial moods and questionable policy positions of President Recep Tayyip Erdogan, but the combination of heavy international borrowing and a fall in the national currency is the same scenario that could undermine other emerging economies.

“Turkey is a symptom of the growing challenges for emerging markets,” said Subbaraman. “Due to super-low interest rates, investors have been on the hunt for yield — until this year. Now they will be blindsided by the risks.”

In a research note Subbaraman published Monday, he pointed to South Africa, Hong Kong, the Philippines, Chile and Mexico as having the most vulnerable economies. South Africa, for example, has significant levels of dollar debt and a sizable current account deficit.

A country runs a current account deficit if it takes in more money — in investments and trade — from foreigners than it sends to other countries. That leaves the country at the mercy of international investors to keep it afloat financially, and those investors could find other markets more enticing — particularly when emerging markets see their currencies lose value. That is precisely what forced Argentina to go to the IMF, the first major emerging market to take such a step during this period of uncertainty. Pakistan may soon have to forge its own deal with the fund for similar reasons.

Subbaraman said the buildup in cheap dollar credit could ultimately threaten South Korea, Taiwan, Hong Kong, Singapore, Malaysia and even China, whose currency, the renminbi, weakened further against the dollar this week. But analysts have long believed that these economies are strong enough to withstand a traditional contagion attack. By his own account, Subbaraman has one of the more gloomy views on the future of these markets — earlier this year he published a report titled “Enjoy the Party, but Stay Close to the Door.”

On Wednesday, the lira rebounded to 6 against the dollar from its recent low of 7.2, helped by steps the Turkish government took this week to limit sales of lira for dollars, and a reported promise by the emir of Qatar to invest $15 billion in Turkey.

Regulators also took an unusual step to help troubled banks, suspending the requirement that banks book losses on the value of their plummeting securities.

Global markets were shakier, though. Emerging market currencies, especially the South African rand, the Russian ruble and the Mexican peso, were down sharply against the dollar. European banks with exposure to Turkey, like BBVA in Spain, UniCredit in Italy and BNP Paribas in France sold off as well. Predicting an emerging market crisis — and the extent to which such a blowup will trigger a wider financial rout — can be hazardous. In 2014, during the Taper Tantrum, investors took out more than $1 trillion from the likes of Brazil and India, fearing an eventual rise in interest rates in the United States. Stock markets in the United States and Europe shuddered, then resumed their upward march. Those who fled eventually returned to these markets, lured by the promise of rich returns in what continued to be a low-interest-rate world.

And in the 21 years since Thailand’s economy went bust — the last genuine case of emerging market contagion — these countries have all dramatically reformed their economies. They have accumulated cash cushions to deploy in case of an assault on their currencies and aggressively fought inflation by raising interest rates. Central bankers, finance ministers and even politicians have become seasoned pros in terms of responding to the effect of capital rushing in and out of their economies. Brazil and Mexico, for example, are two countries that have, through a combination improved policies and proactive steps to fight inflation, drawn investor plaudits.

Jan Dehn, the head of research at Ashmore Investment Management, a large investor in emerging market bonds, contends that the chance the virus in Turkey spreads widely is minimal. He said that in the past decade, most of the large developing markets have established robust local institutions, such as pension funds, that have become the main buyers of corporate and government debt — in their own currencies. That means when fretting foreigners sell their bonds, domestic institutions can step in and buy them, preventing a selling frenzy from becoming something worse.

“This development has broken the link between fickle outflows and economic catastrophe,” Dehn said. “Before, a country could collapse if there were outflows — even if it did nothing wrong. That is not true anymore.”

Perhaps the most arresting statistic in support of the view that Turkey is the canary in the coal mine is the vast amount of cheap dollar-based loans that have accumulated worldwide since global central banks began their rescue operations in early 2009. Countries from Nigeria to Tajikistan have aggressively sought — and received — cash from yield-starved mutual funds.

According to the Bank for International Settlements, a forum for global central banks, the total amount of dollar-based loans has jumped from $5.8 trillion in the first quarter of 2009 to $11.4 trillion today. Of that, $3.7 trillion has gone to emerging markets, more than doubling during that period.

Via loans by U.S., European and Japanese banks or through mutual funds and exchange-traded funds, credit has been easy and very much available for every variety of borrower, not least those erecting malls in Turkey, skyscrapers in China or taking out century loans in now-bust Argentina.

Analysts at the BIS, especially its top economist, Hyun Song Shin, have been warning about this phenomenon for years. Their main point is this: When interest rates rise in the United States, increasing the value of the dollar, foreign corporations and governments will have trouble repaying these debts in their depreciating national currencies — precisely what is happening in Turkey right now.

According to research by Sebnem Kalemli-Ozcan, an economist at the University of Maryland, much of this debt has gone to companies that do not have dollar revenues. These companies, many of which are in the construction or real estate sector, are the ones that are in the most danger.

Take Turkey, she said. As long ago as 2011, 70 percent of the debt held by the Turkish construction industry was in foreign currency. That figure, she contends, has surely risen since then, as the country has experienced a real estate boom.

“This corporate debt issue is bad,” she said. “It is going to blow up at some point.”

Even if the other emerging markets do not succumb to the pressures Turkey is experiencing, there is another route for trouble to spread: European banks, many of which have been enthusiastic lenders to Turkish corporations and financial institutions.

Shweta Singh, an analyst at TS Lombard, a London research house, points out that the European banks with the most significant exposure to Turkey — BBVA, BNP Paribas and UniCredit — are among the weakest in the eurozone in terms of their equity cushions.

During the Greek debt crisis, the panic began over concerns that large European banks holding dodgy Greek bonds would suffer bruising losses. And that’s what happened.

Should such banks experience the same problem with Turkish loans, “the ripple effect could be tremendous,” Singh said.