Why School Districts Have Decided to Bring Only Younger Children Back 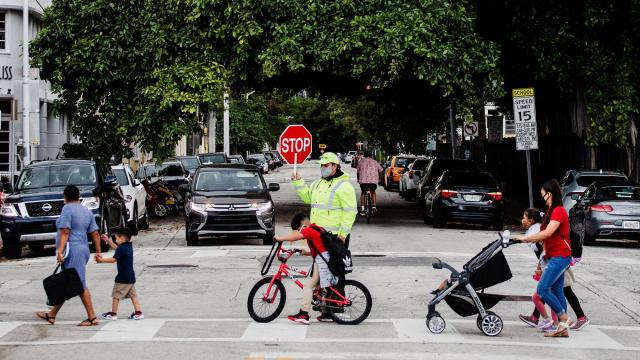 NEW YORK — After a summer of uncertainty and fear about how schools across the globe would operate in a pandemic, a consensus has emerged in more and more districts: In-person teaching with young children is safer than with older ones and particularly crucial for their development.

On Sunday, New York City, home to the country’s largest school system, became the most high-profile example of that trend, when Mayor Bill de Blasio announced that only pre-Ks, elementary schools and some schools for children with complex disabilities would reopen next week after all city classrooms were briefly shut in November. There is currently no plan to bring middle and high school students back into city school buildings.

It was an abrupt about-face for the mayor, who had for months promised to welcome all the city’s 1.1 million children — from 3-year-olds to high school seniors — back into classrooms this fall.

But the decision put New York in line with other cities in America and across the world that have reopened classrooms first, and often exclusively, for young children, and in some cases kept them open even as those cities have confronted second waves of the virus.

In-person learning is essential for young children, who often need intensive parental supervision just to log on for the day, education experts say. And mounting evidence has shown that elementary schools are unlikely to fuel transmission as long as districts adopt strict safety measures. The evidence is more mixed for middle and high schools.

“With younger kids, we see this pleasant confluence of two facts: Science tells us that younger children are less likely to contract, and seemingly less likely to transmit, the virus,” said Elliot Haspel, author of “Crawling Behind: America’s Child Care Crisis and How to Fix It.”

He added: “And younger children are the ones that most need in-person schooling, and in-person interactions.”

Districts including Chicago, Philadelphia and Los Angeles have plans to bring back young children first when they eventually reopen classrooms.

In Rhode Island, Gov. Gina Raimondo, a strong proponent of keeping schools open, recently asked colleges to shift to all-remote learning after Thanksgiving and gave districts the option of reducing the number of high school students attending in person. She said there was “not a shred of data to suggest schools are major spreaders,” but said that high schools had proved to be more problematic than elementary and middle schools, because the students are more mobile.

That model of giving priority to younger students has been pioneered in Europe, where many countries have kept primary schools open even as most other parts of public life have closed during the continent’s second wave.

Italy has kept its primary schools open but left middle and high schools remote-only, and while all schools in Germany are open, discussions about possible closures have focused mainly on high schools.

In America, more and more districts have begun to prioritize elementary school students for in-person learning.

In urban districts, which generally have been slower to reopen than rural and suburban districts, that has meant making plans to bring back the youngest students first. In parts of the Midwest where school districts were more aggressive about reopening, and where there has been a huge rise in cases, public health officials have emphasized keeping elementary schools open even as they have closed high schools and in some cases middle schools.

“The data is becoming more compelling that there is very limited transmission in day care and grade schools,” said Michael Osterholm, director of the Center for Infectious Disease Research and Policy at the University of Minnesota and a member of President-elect Joe Biden’s coronavirus task force, in a recent interview.

“I keep telling people, ‘Stop talking about kids — talk about those younger than 10,’ ” he added. “We’re seeing a very different epidemiology in that group than we’re seeing, for example, in high school students.”

The data is far from perfect, but several studies have suggested that children under 10 transmit the virus less efficiently than older children or adults.

A study published in the journal Pediatrics surveyed 57,000 child care providers across the United States and found that those who continued working during the first three months of the pandemic were not any more likely to get sick than those whose programs closed.

When teachers attempt to teach reading remotely, “you are really kind of tying one leg to the other and trying to run a race,” he said, in part because young children often need small group or individual instruction. Every aspect of remote learning, from signing in to completing assignments, requires basic literacy. That is why so many parents and caretakers have had to sacrifice work or bring their children to day care centers so that the children can get full-time help completing tasks online.

Abundant evidence has shown that students who are not reading by third grade have an extremely hard time catching up with their peers who do and are more likely to drop out of high school.

Crucially, reopening elementary schools — while keeping middle and high schools closed — has become the favored option of influential teachers’ unions, whose leaders have pushed to delay reopening plans in some cities because of lack of federal funding, insufficient safety measures and an outpouring of concern from rank-and-file educators about returning to classrooms.

COVID quarantine could force some Harnett schools to close

But Randi Weingarten, president of the American Federation of Teachers, the nation’s second largest teachers’ union, said New York’s plan to bring back elementary school students with stringent safety protocols could be a national model.

“What we’ve learned is that, unlike adults, elementary school students actually follow the rules, and actually have been really good at wearing their masks and adhering to physical distancing, and are really grateful about having school,” she said. “The fact that young kids follow the rules and pedagogically need in-person education is a good news story.” When New York announced its new reopening plan, Weingarten offered her clear endorsement, and a supportive statement from the United Federation of Teachers, New York City’s teachers’ union, quickly followed.

Asked why his administration was turning its focus to young children, de Blasio said Sunday, “I feel for all our parents who are experiencing so many challenges right now, how important it is for them to have their younger kids in school, how important that is at that age, both educationally and socially.”

Some New York City schools are reopening despite rising cases here. But other districts, including Chicago, Los Angeles and Philadelphia, have pledged to reopen schools, starting with young children, only when — or if — virus cases stabilize.

Officials in Las Vegas and its surrounding suburbs had hoped to restart in-person learning in November. Then came a steep rise in cases that forced the district to delay its plan until at least February.

But the school superintendent, Jesus Jara, said he is intent on bringing as many students back as possible, in part because of the catastrophic toll of remote learning on children’s mental health: There have already been 12 student suicides this academic year in the district, Jara said.

“That has been our biggest concern, that our babies have been home without face-to-face instruction for so long,” Jara said.

A few districts have prioritized the youngest children from the beginning.

In Massachusetts, the Cambridge public school district has brought back students in preschool and children in prekindergarten through first grade, along with some students in all grades who have disabilities or are learning English.

Some districts that opened earlier in the fall for all grades — and have seen cases rise sharply — have chosen to move high schools, and in some cases middle schools, to remote learning but keep elementary schools open.

On Nov. 15, Gov. Gretchen Whitmer of Michigan, a Democrat, issued an emergency order shutting down indoor service at bars and restaurants, closing casinos and movie theaters, halting most organized sports and forcing high schools and colleges to transition to remote learning.

And in Johnson County, Kansas, a suburb of Kansas City where cases are surging, school districts have switched middle and high school to remote learning while keeping in-person classes for elementary schools.

But in some parts of the country, politicians and education officials have resisted calls to close high schools even as the virus ravaged their communities throughout the fall. President Donald Trump has continued to insist that schools should remain open, even though school leaders across the country have said they need more federal stimulus dollars to reopen safely.

Gov. Ron DeSantis of Florida, a Republican, has been one of the most vocal proponents of school reopening. On Monday, he said officials who sought to close schools were akin to “today’s flat-earthers.”