Why Michael Cohen, Trump’s Fixer, Confessed to It All 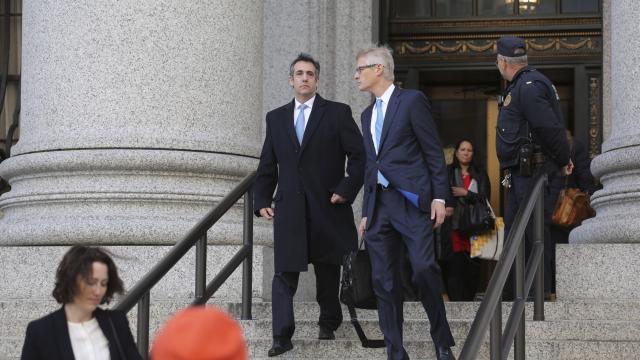 NEW YORK — Of all of President Donald Trump’s former associates who have come under scrutiny in the special counsel’s Russia investigation, his former personal lawyer, Michael Cohen, has undertaken perhaps the most surprising and risky legal strategy.

Cohen has twice pleaded guilty in federal court in Manhattan to a litany of crimes, and he has volunteered information to the special counsel and other agencies investigating Trump and his inner circle. He did all this without first obtaining a traditional, ironclad deal under which the government would commit to seeking leniency on Cohen’s behalf when he is sentenced on Dec. 12.

Cohen has concluded that his life has been utterly destroyed by his relationship with Trump and his own actions, and to begin anew he needed to speed up the legal process by quickly confessing his crimes and serving any sentence he receives, according to his friends and associates, and analysis of documents in the case.

He has told friends that he is mystified that he is taking the fall for actions he carried out on behalf of Trump, who remains unscathed. Still, he is resigned to accepting responsibility.

“He realizes that he needs to move on with his life, and that he’d like to begin that process as soon as possible,” said Andrew W. Albstein, a lawyer and friend who wrote a letter of support on Cohen’s behalf to the judge.

Cohen, who once said he would “take a bullet” for Trump, was for years Trump’s do-it-all fixer who had a hand in several shady deals. He has admitted he lied to Congress to help Trump and broke campaign finance laws by helping to arrange hush money for women who might have embarrassed Trump with accusations of infidelity as he was running for president.

He has not explained his legal approach since he first pleaded guilty in August. But his lawyers, in a sentencing memorandum filed late Friday night, offered the fullest explanation yet for Cohen’s motivation in switching sides and joining the government team, as prosecutors like to say.

Though he has talked extensively with prosecutors, it remains unclear if Cohen possesses any information that could harm the president legally.

Cohen’s approach drew a stinging reaction from Trump, who tweeted angrily on Monday that Cohen had “lied for this outcome and should, in my opinion, serve a full and complete sentence.”

Cohen served as Trump’s loyal ally and go-to lawyer for more than a decade, handling everything from real estate negotiations to hush money payments. He has been trapped at the center of a confusing legal web, involving two separate federal investigations, headed by different prosecutors, delving into different matters.

Investigators have dug into virtually everything, including the way Cohen ran his taxi business, how he bought the silence of two women claiming affairs with Trump and whether he had information about possible contact between Trump’s campaign and Russian operatives during the 2016 election.

Cohen’s commitment to Trump began to wane after a highly publicized FBI raid on his home, office and hotel room in April. Last July, he told George Stephanopoulos of ABC News he was seeking “resolution.” Asked if he would provide prosecutors information about Trump in return for leniency, Cohen replied, “I put family and country first.”

Just over a month later, on Aug. 21, Cohen pleaded guilty in Manhattan to eight felonies — including campaign finance violations, tax evasion and making false statements to a bank — before Judge William H. Pauley III. The federal sentencing guidelines call for about four to five years on those charges, which were brought by the U.S. attorney’s office in Manhattan, known as the Southern District.

Surprisingly, Cohen entered his plea without a traditional cooperation deal in which the Southern District would write to the judge and seek leniency when he was finally sentenced.

Cooperating witnesses are often not sentenced until investigations are completed, months or even years later. Cohen was concerned that signing a deal would delay his sentencing, his lawyers explained in their filing on Friday. “He respectfully declined to pursue conventional cooperation so that his sentencing proceeding would go forward as scheduled,” wrote the lawyers, Guy Petrillo and Amy Lester, both former Southern District prosecutors.

They said that he expected to continue to cooperate. Ever since the FBI’s highly publicized raids in April, the lawyers wrote, “nearly every professional and commercial relationship that he enjoyed, and a number of longstanding friendships, have vanished.”

“Thus, the necessity, at age 52, to begin his life virtually anew, including developing new means to support his family, convinced Michael to seek an early sentence date, fully understanding that this court will determine the timing under which his efforts to rebuild will commence,” the memorandum said.

As one of Trump’s confidants, Cohen was also a target in the inquiry by special counsel Robert Mueller, who has been investigating Russian interference in the 2016 election and potential ties to Trump’s campaign.

Cohen’s lawyers said that their client began meeting with Mueller’s prosecutors as early as Aug. 7, even before his first guilty plea in New York. He ultimately met with the special counsel’s office seven times through November.

Last Thursday, Cohen entered his second guilty plea in Manhattan, this time to a charge of making false statements, which was filed by Mueller’s office. In court, he admitted he had misled congressional committees about negotiations he carried out on Trump’s behalf during the 2016 election campaign on a proposed tower in Moscow. Those negotiations, he said, lasted until five months before the election, far longer than previously known, and Trump was kept in the loop.

For lying to Congress, Cohen faces a potential sentence of up to six months under the federal guidelines. And although there was no traditional cooperation deal, Mueller’s prosecutors agreed to bring Cohen’s assistance to the attention of the sentencing judge. Mueller agreed to file the false-statements charges in New York, where Cohen pleaded guilty before a randomly assigned judge, Andrew L. Carter Jr. But Petrillo then asked that the case be transferred to Pauley “for purposes of sentencing,” and the government had no objection.

Now, as Pauley considers how severe a sentence to impose on Cohen in both cases, he will be able to weigh Cohen’s cooperation with the Russia investigation. The Southern District is expected to join with Mueller in making that presentation, the plea agreement states.

Rebecca Roiphe, a professor at New York Law School, called Cohen’s maneuver “an unusual and creative way to get what he wants out of a situation that’s unorthodox.”

Another legal expert, William J. Harrington, a former Southern District corruption prosecutor who is now in private practice, said, “Tying it up in a bow gives Cohen the best chance at getting significant credit for his cooperation — and a good sentence.”