Why do kids die from the flu? What are the signs children need to go to the doctor?

Editor's note: As we move into flu season, here's an updated version of a popular story featured on Go Ask Mom last year.

Last year's flu season made headlines thanks to a particularly virulent strain of the bug and a rising number of deaths, including among children. The final tally set records, according to the Centers for Disease Control and Prevention. The season left 172 children dead. About 80 percent of those deaths occurred in children who had not received the flu vaccination, which is recommended for everyone 6 months and older, according to the CDC.

By comparison, during the 2016-17 season, 101 children died from the flu. In recent years, the number of pediatric deaths has ranged from 37 during the 2011-12 season to 171 deaths during the 2012-13 season, according to the CDC. The flu season typically begins in October and usually peaks in February or March before it sputters out in May.

Stay Healthy: Tips to keep the flu, stomach bug out of your house

Last year, many parents were terrified as they read stories about otherwise healthy children dying very quickly from the disease.

North Carolina Secretary for Health and Human Services Dr. Mandy Cohen said at the time that though the season's flu vaccine was a pretty good match for last year's bug, some were still getting very sick. "What we're seeing is a very virulent strain. So, while it may be covered by the flu vaccine, it's an intense virulence, and we're seeing folks get sick and sicker," said Cohen in a told WRAL News.

I checked in with two pediatricians - Dr. Jill Wright and Dr. Adam Ottley, pediatricians at UNC Pediatrics at Garner - to learn why some children die from the flu, what are the signs that parents should get their child to the doctor quickly and how to prevent the illness.

What's important to know, both pediatricians said, is that the vast majority of kids who do catch the flu fully recover from the illness within about two weeks.

Flu, cold, allergies: How to tell what's keeping your kid down

(Repeat after me, parents who might be prone to freaking out right now: The VAST MAJORITY of children who get the flu fully recover from the illness with a lot of TLC, rest, fluids and possibly a medication, depending on the recommendations of your doctor.)

"Death from flu is rare," Ottley said. "It's something we have to consider and it's a reason to get a flu vaccine and try to prevent the spread of flu as much as possible, but it's not something to stay up at night worrying about."

Why do kids die from the flu?

Wright and Ottley listed five reasons why flu complications can take a turn and lead to a child's death.

Infection from the actual flu virus

When a child's immune system is on overdrive to get rid of the flu, they may also be susceptible to picking up another illness such as bacterial pneumonia. And, while a 15-year-old may be able to handle the double shot of illness coursing through their bodies, a toddler could have a harder time fending them off. That could lead to hospitalization and, on rare occasions, death.

It might be asthma, a congenital heart condition or diabetes, but a child's existing chronic illness could make them more prone to flu-related complications. In fact, Wright and Ottley said that, in their experience, children who are hospitalized with the flu often have a pre-existing condition. "Our concern is often higher in those that already have underlying medical illnesses," Ottley said. "The flu virus can trigger an asthma attack just like a cold can or allergies can. And flu can be a potent trigger."

"Age is its own risk factor," Wright said. Elderly people are more likely to face flu-related complications. So are very young children, especially those under the age of five. Babies less than six months old are particularly at risk because they are not old enough to get a flu shot.

An immune system's reaction to the flu

"Sometimes your immune system goes into overdrive," Wright said. "That can be very serious." That reaction could cause sepsis, for instance. The tissues in our body need oxygen to function. Sepsis is defined as the inability for oxygen to be delivered to those tissues. And, in very rare cases, it could lead to something scary called a cytokine storm, a fatal immune reaction. But, added Ottley, "that is extremely rare." 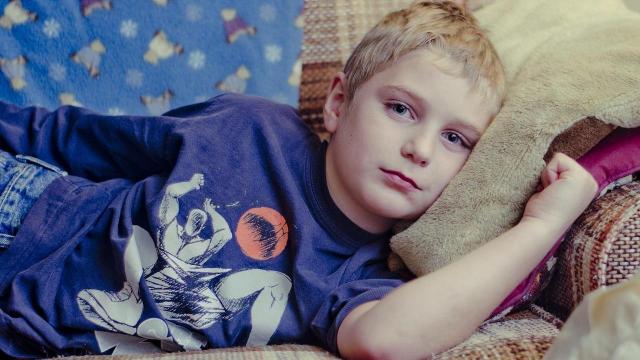 What are the signs that your child needs to see a doctor ASAP?

As soon as flu symptoms appear, Wright and Ottley recommend at least a call to your child's doctor to get advice on home care or see if it would be best to bring them in, especially if they have an underlying medical issue. Antiviral medications, such as Tamiflu, are best when started within 48 hours of those first symptoms appearing, though they can still help even after the first two days of illness.

Common flu symptoms include a fever, cough, sore throat, runny or stuffy nose, muscle or body aches, headaches, tiredness and, especially in kids, vomiting and diarrhea, according to the CDC.

Signs that a child has taken a turn for the worst and may need immediate treatment from a doctor, said Ottley and Wright, include:

Make sure you and your kids get a flu shot, Wright and Ottley said. Because the flu doesn't peak until February or March, it's not too late. But it does take about 10 to 14 days for the shot to become effective, so don't wait, they said.

Even though the shot doesn't protect us from every strain of the flu, it's still the best way to protect yourself from the illness (other than living like a hermit during flu season), they said.

Creating the annual flu vaccine isn't an easy job. Researchers make educated guesses about what strains will be running roughshod around our schools and public places as they come up with the latest concoction. What's more, according to the CDC, the flu virus constantly changes from season to season.

But it's still effective. And it saves lives. A 2017 study in Pediatrics found that the vaccine can reduce a child's risk of dying from the flu. This week, the CDC urged people to get vaccinated.

"I was just telling someone the other day, 'Don't try to outgame the flu,'" Ottley said. "Get your flu shot every year and don't try to base it on whether or not you think it will be a good match to the flu."

There are side effects from the shot, but they typically are mild and go away within a couple of days, the CDC reports. The flu, on the other hand, can put you out of commission for a week or more. (I'm speaking from experience.)

"It's probably riskier to drive to the doctor's office to get it," Wright said.

And the shot doesn't just protect you or your child. It also protects those at risk around you, especially babies, young children and the elderly, who are more likely to experience complications.