Why Are Taxi Drivers in New York Killing Themselves? 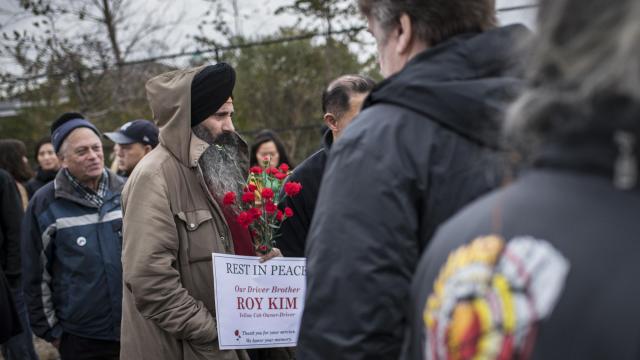 The city’s taxi commissioner, Meera Joshi, has characterized the deaths as an epidemic. The stories have drawn attention to the economic despair in the industry and prompted the City Council to weigh new legislation to help taxi owners reduce their debt and to increase driver wages.

Each case is different, and it is difficult to know why someone decides to take their life. Most of the drivers were immigrants in their 50s and 60s, some of whom had told friends and family that they were having a difficult time making a living as Uber began to dominate the ride-hailing industry.

Three of the drivers owned a taxi medallion — the aluminum plate required to drive a cab in New York that once sold for more than $1 million. It is now worth as little as $200,000.

Here’s what we know about Kim and the broader crisis.

Who was Roy Kim?

Kim was a 58-year-old Korean immigrant who lived in Queens. He had driven a taxi for more than four years and bought a medallion last year for about $578,000 — an occasion he celebrated by having a sushi dinner with a driver he met years ago while waiting for passengers at Kennedy International Airport.

But Kim had complained to friends this year that he could not find fares. He began working more often, eventually driving seven days a week. Still, his friends were surprised by his death.

“There’s no other reason but the financial aspect,” said Kyung Ryong Kang, the friend and fellow driver who had celebrated at dinner with him last year. “It was harder and harder to survive.”

On Nov. 5, Kim was found hanging by a belt from the doorway to his bedroom, police said. He had an adult son who lives in South Korea. Friends have been unable to reach Kim’s son.

A group of drivers recently held a vigil at Flushing Meadows Corona Park in Queens to remember him. Kang said he misses seeing Kim at the airport taxi lot.

“He was a generous person and always bought coffee for us,” he said.

Were the other drivers worried about their finances?

Two other drivers who took their lives also owned taxi medallions: Nicanor Ochisor, who was from Romania, and Kenny Chow, who was from Myanmar. Both told friends they were worried about paying off their debt.

In February, a black-car driver named Douglas Schifter killed himself with a shotgun in front of City Hall. He had written on Facebook that Uber had flooded the streets with vehicles and complained about having to work 100 hours a week to survive.

Drivers for Uber and other car services have also raised concerns about low wages. The other drivers who died by suicide were: Fausto Luna, an Uber driver; Abdul Saleh, a taxi driver who had leased his vehicle; Danilo Castillo, a livery driver; and Alfredo Perez, a livery driver.

“This tragedy underscores the importance of finding new ways for government, the industry and lenders to work in unity to address the financial challenges that are weighing so heavily on our licensees,” Joshi said in a statement after Kim’s death.

What is the city doing to help drivers?

In August, the City Council approved a cap on Uber and other ride-hailing vehicles — the first major U.S. city to do so. The council is considering a separate set of bills that would establish a health fund for drivers and create “driver assistance centers” to offer mental health counseling and financial advice.

Corey Johnson, the council speaker, said the city was also looking at options to help medallion owners saddled with massive debt, from a partial bailout to a hardship fund. The New York Taxi Workers Alliance, a group that represents drivers, is urging the city to work with banks and philanthropic groups to write off 20 percent of taxi owners’ outstanding debt.

At the vigil for Kim, the group’s leader Bhairavi Desai had a message for taxi drivers who are struggling: The city is finally addressing the problem, and things will get better soon.

“We know change is coming,” she said.

After Ochisor’s death, his family raised more than $30,000 to help pay off his medallion. An anonymous donor also contacted his son Gabriel Ochisor, wanting to help longtime drivers like his father. The donor sent him a batch of money orders, each worth $1,000, to deliver to 217 owners who bought their medallion before 1990 and still drive their taxi.

Ochisor is trying to reach all the drivers to mail the gifts, which will be sent with a letter from the donor.

“Please know that your 3 decades (or more!) of service are appreciated and that my life has been made better by your having worked the streets,” the letter says.