'Whoever wins, we lose:' Six arrested among around 200 protesters in downtown Raleigh march

Raleigh, N.C. — A group of about 200 protesters marched through the streets of downtown Raleigh Tuesday night.

Some were chanting, "Whoever wins (the election) we lose," while others burned small American flags. 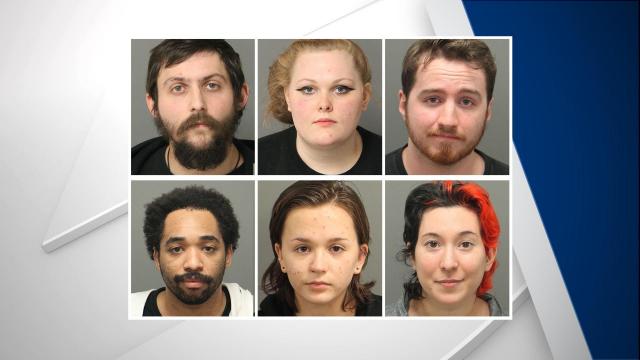 Six protesters were arrested following fireworks and others items being thrown at police. The move lead police to declare the assembly "unlawful."

The demonstration broke up just after 10 p.m.

Raleigh Mayor Mary-Ann Baldwin said no decision has been made on whether the city will be under a curfew in the following days following election results.

Authorities had prepared earlier in the evening for a potential night of unrest in the wake of the 2020 presidential election.

Fences and barricades were placed, including around the State Capitol building, in downtown Raleigh earlier in the day.

Several businesses in Raleigh boarded up last week over possible racial justice protests on Friday and decided to keep the plywood up over concerns that Tuesday's election's outcome could lead to violence.

"It's sad we got to the point we had to close up stores," said shopper Samantha Poithress.

A protest has been planned for election night with one flier stating, "Hit the polls and hit the streets."

"You don't have to use violence to get your point across," she said.

North Hills and Triangle Town Center were vandalized during riots earlier this year over police brutality and racial injustice.

Local business owners said they continue to monitor the situation closely in anticipation of protests.

"We want to prevail there is a positive response even though this is a charged election," said Dr. Joe Stevenson, a pastor at Macedonia New Life Church.

Faith leaders are calling for peace, regardless of who wins the election.