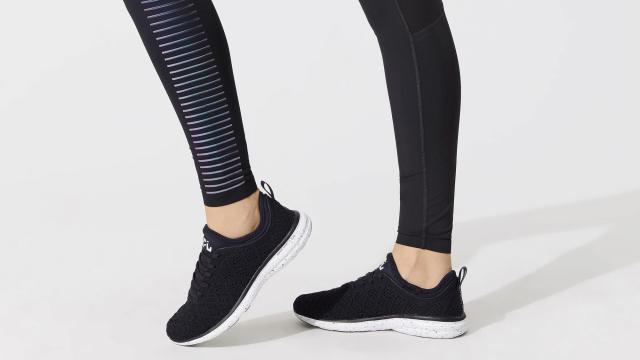 First there were the impossible-to-get-into $40 exercise classes. Then came $365 foam rollers and $1,000 yoga mats. And now: $320 workout tights you basically have to pass a background check to be allowed to buy. Of course, they’re sold out.

No, you’re not reading The Onion.

The matte black, logo-free leggings came to market in June, part of the five-piece first collection of a company called Wone (pronounced “won”), started by Kristin Hildebrand, a onetime fashion blogger and former global concept creative director for Nike. Each piece in the all-black collection (two sports bras, one pair of shorts, a sheer cardigan and the leggings) was numbered like a limited-edition lithograph, and they have all sold out.

To buy anything, hopefuls (who mostly heard about the brand by word-of-mouth) had to request access to the Wone website by clicking a button. Hildebrand, 36, then Googled aspiring customers — “these people have fascinating lives,” she said — before writing to some personally to grant them one-week access to make a purchase.

“I’m not trying to be exclusionary,” said Hildebrand, who got the members-only-buying idea in part from some boutique wineries near her home in Portland, Oregon. Her extreme “customer profiling,” as she called it, is in service, she said, of making buyers feel important.

She described, with distaste, going to a pop-up boutique in Los Angeles, where a brand took the time to confirm the time she planned to show up. When she arrived, the owner seemed more interested in checking Instagram than in interacting with Hildebrand.

Who didn’t make the cut? People who want to buy “five of everything,” Hildebrand said. “I get multiples of the bra or of the legging, but excessive numbers of the entire collection and I get skeptical.” (She feared these people planned to resell at higher prices.)

She also rejected anyone she suspected was buying to knock off her design, or for research. “I’ll email them and say, ‘Is this you on LinkedIn?'” Hildebrand said. There is no actual rejection email; she just ghosts those she doesn’t want to buy her wares.

Approved buyers talk about Hildebrand’s wares with the zeal of religious converts, or maybe just of people who’ve paid a premium. “A little slice of heaven,” said Chloe Pacheco, 27, a pediatric nurse in Albuquerque, New Mexico.

“They’re like a second skin. I’m in love with them,” said Melanie Palmer, 29, who works in sales and lives in Brooklyn.

Sarah Burdash, 30, a financial analyst in St. Paul, Minnesota, second-guessed her leggings order, wondering if “it was all just hype.” Then she went for her first run in what are the most expensive leggings she has ever bought. “They were so buttery soft I forgot to turn my Garmin on,” she said, referring to her performance-tracking watch.

Wone’s leggings aren’t the only ones that are hard to get. In December, the upscale London brand Lucas Hugh will begin offering leggings featuring a design that looks like the support tape physiotherapists use, in a limited edition of 20. Cost: $250 apiece.

This past summer, Bandier, which sells designer active wear, quickly sold out of $198 black Ultracor leggings printed with lightning bolts. The wait list topped 1,000, according to the company. The brand eventually was restocked in five patterns — some women bought one of each — and special fits like a higher waist.

Jennifer Bandier, the boutique’s founder, was not surprised. “The customer needs to feel like making a purchase is an experience and that what they are buying has a good story that they can share with their friends (and their social media followers),” Bandier wrote in an email.

Wone’s offerings also aren’t the most expensive out there. Katie Warner Johnson, a founder and the chief executive of Carbon38, which sells fashion-forward activewear, said that women’s willingness to pay about $300 for Michi leggings was “essentially the foundation of our business.” One of the first items Carbon38 offered was a style called Medusa: a swirling patchwork of black spandex, mesh and heather gray fabric that made it look as if the pants were growing up the wearer’s leg. And women were lining up for them back in 2014.

“We’ve been really able to play with the price spectrum since then,” Johnson said.

These brands have “high sell-throughs,” Van der Goltz wrote in an email. (Their cost continues to accrue after purchase: The Fendi leggings, although designed to sweat in, require hand washing or dry cleaning.)

What does $300 and up buy you? In the case of Wone, not strategic color blocking or extra ventilation. Instead, Hildebrand touts personalized finishing and Italian and French fabrics, which cost $20 to $25 per yard, as opposed to the $3 to $4 for fabrics more typically used in active wear.

As opposed to the standard promise of holding up through 50 machine washes, Wone’s are guaranteed through 50,000 washes — that’s every single day for the next 136 years, or at least through your lifetime, no matter how much exercise might extend it. (What will future archaeologists think when they excavate large amounts of indestructible athleisure?)

Wone’s social media strategy is also different from most brands’: The company’s lone Instagram post, for example, is of blank white space.” It’s hard to be in health and wellness and advocate or even promote something that’s sort of the antithesis of wellness,” Hildebrand said of the brand’s tactic. “It wouldn’t make sense from a philosophical standpoint.”

And yet influencers, to whom Hildebrand gave products, helped stoke demand (one influencer described a Wone bra in an Instagram Story as the best she’d ever worn). The brand’s packaging — a brown box containing a sleek black box, tissue paper sealed with embossed sticker — has inspired many an unboxing video.

Hildebrand, who also founded a now-defunct meditation studio, will also email customers at all hours, which might seem at odds with wellness. “I struggle with that,” she said. “I’m trying to build this to a place where I can absolutely afford to limit my hours.”

But not for long her customers: Barneys New York will begin selling Wone in December.