Who Was the Real Lorax? Seeking the Inspiration for Dr. Seuss 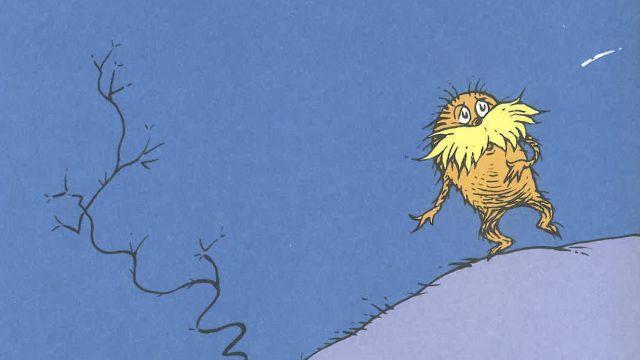 What inspired the creature who was “shortish and oldish and brownish and mossy”? The one who spoke in a voice that was “sharpish and bossy”? He spoke for the trees, yet he called them his own. All that he left “in this mess was a small pile of rocks, with the one word: ‘UNLESS.'”

In 1970, millions of people observed Earth Day for the first time, and the Environmental Protection Agency was born. Joni Mitchell’s “Big Yellow Taxi” was on the charts.

And in the La Jolla section of San Diego, Theodor Geisel, also known as Dr. Seuss, was fighting to keep a suburban development project from clearing the eucalyptus trees around his home. But when he tried to write a book about conservation for children that was not preachy or boring, he got writer’s block.

At his wife’s suggestion to clear his mind, they traveled to the Mount Kenya Safari Club, an exclusive resort where guests watched animals along Kenya’s Laikipia plateau.

And if you have not guessed by now, it was there that “The Lorax” took shape — on the blank side of a laundry list, nearly all of its environmental message created in a single afternoon.

It has been translated into more than a dozen languages, sold more than 1 million copies and adapted into a 2012 film. It was Dr. Seuss’ favorite book and one that was much discussed for its environmental resonance.

In it, the Lorax, who “speaks for the trees,” pops up from a chopped-down tree stump and angrily demands that a businessman called the Once-ler stop cutting down Truffula trees to knit “thneeds.” But the Once-ler does not listen and eventually is left alone in a crumbling, empty factory on a barren landscape.

Despite an unsuccessful attempt by the logging industry to ban “The Lorax” in the 1980s, many have embraced the storybook as a critical tale about environmental policy, especially for children, ultimately heeding a hopeful message that future generations can save the environment by caring for it. But some have worried that the Lorax, with his possessive use of “my” when referring to the trees and other creatures, is not really a good teaching model because he comes off as a self-righteous eco-warrior with an unfounded anger.

In an essay published last month in Nature Ecology & Evolution, the authors argue that the Lorax may not have been as bossy and ineffectual as he seems. Rather, the authors posit that he may have been involved in a type of symbiotic relationship with the Truffula trees and his surroundings, threatened and defensive.

“The prevailing sense among literary critics is that the Lorax is too angry and that environmentalists can’t afford to adopt that kind of rhetoric because it will never work with policymakers,” said Nathaniel Dominy, an anthropologist and evolutionary ecologist at Dartmouth College and lead author of the paper. “If you see the Lorax not as some indignant steward of the environment, but instead, as a participating member of the ecosystem, then I think his anger is so much more understandable, and I think, forgivable.”

The case for the Lorax’s Kenyan inspiration emerged after Dominy grasped for something to talk about at a dinner with Donald E. Pease, an English professor at Dartmouth College, praised for his lectures and biography on Dr. Seuss. And it evolved into a scientific process that included feeding the Lorax’s cartoon face into sophisticated monkey face-recognition software.

Dominy, also a father, raised the topic of “The Lorax,” suggesting that the fuzzy, mustachioed protagonist of the book resembled the patas monkey, a fluffy, orange, real-life creature with a raspy alarm call that he had observed while working in Kenya.

The monkey gets most of its nutrients from a gnarly tree called the whistling thorn acacia, in a type of interaction called commensalism, wherein one organism benefits from another without harming it. The tree also looks like barren trees in the story. “If Dr. Seuss would ever make a monkey,” he told Pease, “that would be the one.”

Pease questioned the notion that a creative master like Dr. Seuss would ever use a real life reference, but became convinced after considering how the Lorax appeared from that chopped-down tree stump, suggesting, in a way, that the Lorax was part of it. This made the character’s use of “my trees” more reasonable.

“The Lorax no longer sounded like an eco-policeman,” Pease said, “but instead was a creature that could be understood as the spirit in place for the entire ecosystem.”

To him, Dominy’s otherwise silly conversation topic deserved attention because it enriched previous understanding of the work and addressed critical concerns. In what became their passion project, they searched for clues to support Dominy’s hypothesis.

After scouring the literature and talking with Audrey Geisel, Dr. Seuss's widow, they determined that the author had most likely devised his story after observing the relationship between the patas monkey and whistling thorn acacia during his Kenyan vacation.

They also teamed up with an anthropologist at New York University who had developed a machine learning algorithm for analyzing similarities among a large database of African monkey faces. Together, they fed the faces of five real Kenyan monkeys, the cartoon Lorax and a character from “The Foot Book” (its most common Seussian ancestor, they figured) into a program. Analysis revealed that the Lorax looked more like the patas monkey than the Foot Book creature.

“We’re taking real tools from biology and applying them in super serious ways,” Dominy said. “I hope people find the humor in this.”

In the book, once the forest and all its inhabitants vanish and the Once-ler is left with his empty factory, the Lorax blasts off into the sky leaving behind the rocks and the word “unless.”

Years pass, and a regretful Once-ler finally understands these words when a visitor asks what happened to the Lorax. He throws the last Truffula tree seed to the child, and says “UNLESS someone like you cares a whole awful lot, nothing is going to get better. It’s not.” Matthew Teorey, an English professor at Peninsula College in Washington state who was not involved in the study, has likened the Lorax to the writer Wallace Stegner, an environmentalist who wrote an article in 1969 using the term “unless” in a similar argument to that of “The Lorax.” Still, he said he appreciated the new interpretation of the Lorax as an indigenous person or creature of the exploited land that can speak for the environment.

Real monkey-tree connection or not, by simply acknowledging this comparison,Pease said, we learn about important ecological concepts and environmental interactions — like how removal of a keystone species, like the Truffula tree, can lead to ecosystem collapse.

We will never know for certain the inspiration of this cautionary tale, but it does not really matter, Dominy said. “Ecosystems are communities, they’re assemblages of species that are interacting, and if you affect one, you affect all of them. That’s what’s important, and he nailed that beautifully.”