Who’s Thirsty Enough to Buy the Most Expensive House in America? 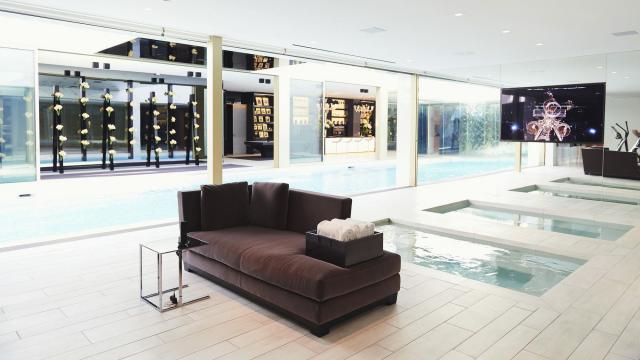 LOS ANGELES — “Let’s say you’re a superwealthy single dude who just sold your company,” said Nile Niami. “You’ve just moved to LA, and you don’t know anybody, so you hire someone to fill your house with partyers. You want everyone to know who you are, but you don’t want to talk to anybody. So you go sit in your VIP room.”

Niami was giving a tour, and, unlike most home tours, this one started in the nightclub. It will have multiple bars, its own coat room and LED ceilings playing images of moving clouds. Beyond the floor-to-ceiling glass walls there is a swimming pool, along with panoramic views stretching to downtown and the Century City neighborhood.

The house is entering its fifth year of development. When it’s finished in the spring, it will be one of the largest private homes in America — 100,000 square feet — and, at an asking price of $500 million, will bill itself as the most expensive, as well.

The property has 20 bedrooms. Seven of them are in a separate building for staff. The largest bedroom is a 5,500-square-foot master suite. It will have its own office, pool and kitchen; like the VIP room, it is meant to be a private retreat from the rest of the house.

The house has a commercial-size beauty salon and a lounge where the walls and ceilings are made of jellyfish aquariums. Asked why, Niami shrugged, looking slightly baffled by the line of questioning. “Because it’s cool,” he said.

At a minimum, he said, there are four swimming pools, including the ones in the nightclub and master suite. But by another count, he said, there are seven, including an infinity-edge moat that surrounds the property, as well as indoor spa pools. He also lost track of the number of elevators. “I need to count,” he said, holding up his hand and closing his eyes. A few seconds later, he arrived at the tally: five.

In the 19th century, families like the Astors and the Vanderbilts spent years or even decades designing Greek- and Roman-revival-style estates to impress European aristocrats. Now it’s developers like Niami, a former B-movie producer, who are building the homes, designed to impress international billionaire would-be buyers.

The house’s architect, Paul McClean, who also designed the home that Jay-Z and Beyoncé paid $88 million for earlier this year, said it would be as much an entertainment showpiece as a house. That’s very much how Gilded Age mansions functioned. “The pattern repeats itself,” McClean said.

But while Gilded Age mansions were built as family legacies to be passed down to future generations or endowed to universities, these tech-centric, ultramodern glass-and-marble behemoths are designed for living in the moment. They come furnished, often with artwork, wine and cars. Each represents a developer’s bet that an instant-gratification billionaire is willing to pay more for it than almost anyone else has ever paid for a personal residence before.

This New Gilded Age has found an epicenter in Los Angeles, particularly where the city’s Bel-Air and Holmby Hills neighborhoods converge with the city of Beverly Hills. Real estate agents call it the Platinum Triangle. A spec home is on the market in Bel-Air for $250 million; it comes with two years of prepaid household staff. Nearby, a London-based developer is marketing a gated community where homes start at $115 million.

In 2012, Niami paid $28 million for the hilltop lot, which included a vacant 10,000-square-foot house that he said was in ramshackle condition. He declined to say what he was spending on construction.

The One, as he has branded it, will officially hit the market when it is completed in mid-2018. Local real estate agents seem to agree that Niami is building a one-of-a-kind mansion on a one-of-a-kind lot, with a 360-degree view you’d be hard pressed to find anywhere else other than the Getty Museum.

Many also agree it’s unlikely that he will get his price. Stephen Shapiro, the president of Westside Estate Agency in Beverly Hills, says sales have been very strong for houses over $20 million in and around Los Angeles over the past several years. But he cited only three or four sales over $100 million in all of California — what he described as “a nonexistent market.” Fewer than three dozen homes worldwide have sold for more than $100 million in the last decade, according to a report by Christie’s International Real Estate.

Jonathan Miller, an appraiser in New York who has been tracking U.S. home sales over $50 million, said a $250 million four-floor condominium in Manhattan has been in contract for two years and is scheduled to close escrow soon. The 2015 record was an estate in France that sold for $300 million, whose buyer was recently revealed as Saudi Arabia’s Crown Prince Mohammed bin Salman.

Miller said he didn’t think any of these sales necessarily indicated the market was strong. “I call this aspirational pricing,” he said. “There’s been nothing close to $500 million.” There is also a growing belief that there are more houses being built in the $100 million-plus price range than there are buyers who can afford them. (Niami says his house isn’t comparable to any others being built because of its size, its unusually large hillside lot, and its views.) Niami’s real estate sales partner, Drew Fenton, declined to be interviewed but said in an email that the One is in a category of its own and that the top end of the luxury market in Los Angeles is booming, with low inventory and “many qualified buyers.”

Niami could still make a hefty profit if the property sells for well under $500 million, which seems like the plan. Most homes with record-breaking asking prices have sold for significant discounts. The Playboy Mansion, for example, was listed for $200 million and sold for $100 million in 2016.

But this may be the pinnacle of the huge-house arms race in Los Angeles. One upside, for Niami anyway, is that it’s likely no one could ever again build a home of this size. It took almost two years to excavate the hilltop lot, with construction vehicles clogging the narrow, hilly streets.

In reaction to both megasize homes and construction that strains lot sizes, Los Angeles has since passed an “anti-mansionization” ordinance, capping home sizes in many neighborhoods.

So the scale helps justify the asking price. “That’s one of the things we’ll be selling,” said Jeff Hyland, the president of Hilton & Hyland, the real estate firm that has the listing. “You couldn’t build this again.”

Niami said he thought the buyer would likely purchase the property as a fifth or sixth home. The estate would basically serve as a private hotel to visit a couple of times a year. “They would have a full staff with uniforms,” he said. Meals would be prepared off-site or come from the large catering kitchen, which is downstairs. (The main kitchen has four ovens, if needed.)

Niami was raised by a single mother in a 1,100-square-foot home in Los Angeles. Doug Witkins, who was Niami’s Big Brother mentor in the early 1980s, said, “He struck me as the best salesman I’d ever met in my life, at age 11.”

While still in high school, Niami took night classes to get his cosmetology license, then learned how to do special-effects prosthetics for horror films. At 19, he went to work with Witkins, selling international movie rights at his film distribution company.

Later, he started his own production company, spending $300,000 on a trailer to hype a movie he described as a “'The Terminator’ with a woman.” Niami and a partner went on to produce 14 more films, many of them straight-to-video B movies. One starred Keanu Reeves at his post-"Matrix” peak and earned $29 million in the United States, but cost over $30 million to make. Niami said he realized that if he couldn’t make a big profit off that movie, he probably never would.

So he started building small condominiums and renovating homes to sell. Building luxury spec homes from scratch in affluent areas, he broke a few neighborhood price records. In 2014, Sean Combs paid $39 million for one of his spec houses. (It had an underwater tunnel connected to a grotto.)

Niami has built more than 30 houses in Los Angeles, with half a dozen more under construction. He plans to start looking for investment partners and penthouses in New York City to develop next year.

Witkins went to work with Niami after his own business fell off during the last recession. He said his onetime mentee took what he learned producing films and applied it to building and selling homes. “Each house is like a set and an ongoing production,” Witkins said.

Just above the Sunset Strip, construction workers in white bootees were putting the final touches on another home — a 14,000-square-foot house that Niami is building for himself. It has a custom-made 24-foot gold giraffe skeleton sculpture in a glass box and a $400,000 Lucite-bottom swimming pool.

“This entire house is about excess,” Niami said after showing off a giant sensory deprivation chamber, a cryogenic spa treatment chamber and a hot yoga room with living walls. “Who needs two pools? Two Jacuzzis? Nobody! But it’s cool.”

Later, we went to Opus, a 21,000-square-foot home in Beverly Hills, hidden behind a shiny gold wall, that Niami started marketing six months ago for $100 million. To help sell it, he produced a three-minute trailer featuring largely nude women painted in gold gyrating suggestively and swimming in the pools. It was meant to be “very sexy, on the edge,” he said, citing Beyoncé's “Partition” as inspiration.

In September, he cut the asking price to $85 million. Buyers, he said, weren’t actually interested in purchasing the home with the roughly $12 million worth of Lamborghinis, Rolls-Royces and Damien Hirst paintings he was going to include at the higher asking price. (The house next door, built speculatively by the QVC handbag mogul Bruce Makowsky, sold in 2014 for a record $70 million to the Minecraft founder Markus Persson; it was listed for $85 million.)

It was a balmy late-November afternoon and the glass walls of Opus’ living room were open to the 85-foot-long infinity pool, where a bird landed to bathe itself. Niami took a chamois left behind by a maid and dusted an already spotless-looking shelf inside the champagne room, filled with $300,000 worth of Cristal. Then he picked up a gold champagne holster in the shape of a machine gun and struck a quick pose.

Later, Niami made cappuccinos from a wet bar’s iPad-activated coffee maker and took in the panoramic view beyond the pool. It was a slightly hazy day, but there was still good visibility.

“It’s funny,” he said. “A lot of the houses I do look into other houses I’ve done.” Across the way, for example, was another modern glass mansion he built a few years ago. It looked vacant, with overgrown landscaping.

Niami said the buyer, from Malaysia, paid him $40 million for the home and then promptly gutted it. “That house looked like this,” he said, stretching his arms out wide for emphasis. “Furniture! Beautiful! Everything!” Eventually, he said, the Justice Department took possession of the home after the owner ran into legal trouble. It’s been empty ever since. “It’s so sad,” he said.

The next day, he was still thinking about that house. In the chauffeured Mercedes van that is also his office, he scrolled through original photos of the house on a large screen mounted to the back of the driver’s seat. The house had sleek white marble floors and was resplendent in black, white and gold. “I want to buy it back,” he said.