Who’s in Charge Here? It’s the Dog, of Course 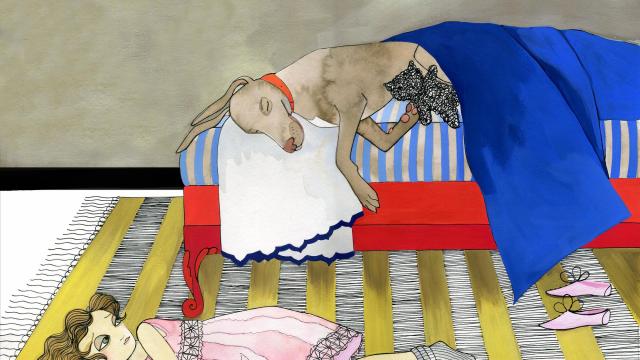 Certain people in my household — and I’m not naming names — have been waging a stealth and coordinated campaign to get a dog.

One of them might drop subtle hints when we pass a particularly cute poodle in the park, stopping to pet it to demonstrate just how mature and capable she would be if such a creature were to join our family.

Another one of the architects of this effort might curl up on the sofa and casually say something like, “But wouldn’t it be so nice to have a little Jack Russell at your feet? He could keep you company while you work from home.” When that line of argument falls flat, he might add, “They’re not very big; they don’t take up much space.”

I may have never lived with a dog, but I know the truth. A dog, as small as he or she might be, would rule our home.

Some canine enthusiasts might deny this, telling you that a dog makes for an easy pet. Sure, you don’t have to clean a fish tank, scrubbing algae from the glass and siphoning polluted pebbles. But I’m thinking about my home, not just the mundane grind of pet care. Prod a little deeper, and a fuller picture emerges, one where the four-legged family member calls the decorating shots.

Your precious Yorkie mistakes the sisal area rug for a Wee-Wee pad one too many times, and suddenly you’ve traded the carpet for cowhide because, for some inexplicable reason, your pooch won’t soil another creature’s pelt. Or maybe your anxious dachshund can’t handle a crate, so you cede an entire room because, well, she feels more relaxed in larger quarters. (Don’t we all?)

The décor is just the start. Smuggle a mutt into a no-pet building, and after a few months spent hiding from the super, you may just pack up and move to a place with a pet concierge.

There’s no avoiding it: If you bring a dog into your home, it will change how you live in it. This is especially true if you live in the city, where space is tight and dogs are everywhere. “As humans, we often expect dogs to understand how to live with us. They don’t come to us knowing not to chew on things, not to jump on things. They’re just being dogs,” said Anna Ostroff, an associate dog trainer at the School for the Dogs in the East Village. “I do think that by choosing to be a pet parent, especially in New York City, we are going to have to make some accommodations.”

Those accommodations can be substantial.

Soon after Kelly Kreth brought a dachshund home to her Upper East Side alcove studio 18 months ago, she realized the puppy suffered from separation anxiety and could not be left alone or crated. So she did what any devoted pet owner would do and gave Biggie Smalls her home office, installing an 8-foot-long gate at the entrance. Kreth, 48, a publicist, works from home and now considers the sofa her office.

“I thought I could just fit her seamlessly into my apartment,” she said. “No such luck.”

Kreth installed a Nest camera to monitor Biggie on the rare occasions when she leaves without her. The building’s maintenance manager also helps, taking the dog down to the basement when she gets lonely. Last May, he took Biggie home with him to New Jersey when Kreth went away for a week.

The building has been so supportive of Biggie’s big needs that Kreth doubts she could ever move. “I can never leave now. I would not even know where to begin,” she said. “In a new building, what if all the neighbors hated me?”

Of course, there are plenty of places to live in New York where dogs are welcome. Of the 76,494 dogs voluntarily registered with the city in 2016, the three ZIP codes with the most dogs were clustered on the Upper West Side, according to data compiled by Localize.city, a website that provides data on any address in the city. But even in a dog-friendly town, you might still have to choose between your beloved apartment and your pup.

For nearly six years, Juan Rosales and Sam Litton lived in the kind of apartment that other New Yorkers envy: one that was enormous and relatively cheap. They paid $2,400 a month for the spacious two-bedroom in Vinegar Hill, Brooklyn. The building’s strict no-pet policy wasn’t a problem until the couple adopted Hugo, a mutt, in October 2017. “It was a great apartment,” said Rosales, 40, who works for the city’s Department of Education. “We would still be there, but for the dog.”

Soon, they were timing Hugo’s walks to avoid encounters with the super. They gave the dog walker instructions on how to keep a low profile. What was once a dream apartment no longer made sense. So three months after Hugo arrived, the couple moved to a one-bedroom apartment at 33 Bond St. in Downtown Brooklyn that was half the size of their previous one and, at $3,100 a month, more expensive. But unlike their old dog-averse quarters, their new building provides a buffet of pet-friendly services like doggy play dates, dog walking, boarding and grooming, training and even doggy facials — all provided by Throw Me a Bone.

Rosales and Litton, 32, a lawyer, have fully embraced living in a pet-centric community where neighbors are more likely to know your dog’s name than yours. “Not only do we not have any regrets, but we would love a second dog,” Rosales said. A new pup, though, would exceed the building’s pet limit, meaning the couple would have to move again. But what’s the price of a moving van if a puppy is involved? Of course, not everyone’s life has to be upended by a dog adoption. If my family’s puppy campaign succeeds, we wouldn’t have to move and I doubt we’d have to refurnish, but you never know.

“Getting a dog will usually change you in ways you didn’t expect,” said E’Lise Christensen, a veterinary behaviorist in Manhattan. “Every dog is a new relationship, just like every person.”

I know myself well enough to know that if we were to bring home a furry family member, I’d be all in, and so would likely end up like Moom Luu and Kate Anthony, a married couple who live in a Ridgewood, Queens, two-bedroom with their 11-year-old Pekingese. McGee “is the master of our home and we are merely his staff,” Luu said.

Three months ago, they gave their $5,000 Mitchell Gold + Bob Williams leather sofa to the super because McGee, who has back problems, could no longer safely jump up onto it. The new sofa, which is lower to the ground and made of a rough fabric, is less comfortable for Anthony, who is 51 and 5-foot-9. But she is willing to tolerate the awkward seating arrangement, which is not surprising considering the couple’s bed has a ramp and is surrounded by a wooden gate to make life easier for McGee.

“It kind of looks like a giant crib,” said Luu, 45, who works in print and web production. “It’s such a bummer, but there’s nothing we can do.”

I know something we could do: not get a dog.

As someone who has already surrendered much of my home and life to people much smaller than me, I am not ready to relinquish any more space to another pint-size creature, at least not yet.