Who Are We Talking About When We Talk About Latino Voters? 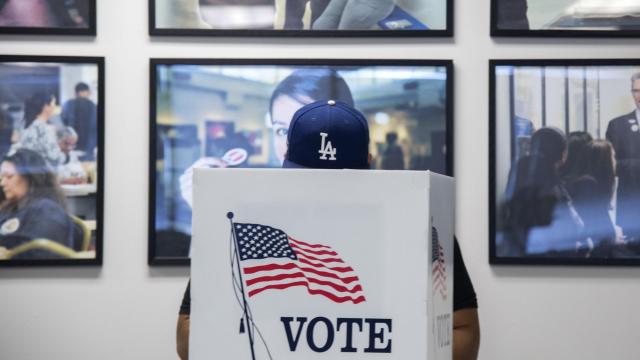 LOS ANGELES — Even with millions of Latinos becoming newly eligible to vote every election cycle, many fail to cast ballots. Whether Latinos will turn out in large numbers this midterm election — this time with party control in Washington at stake — remains a big question.

But who are Latino voters, really? When we speak about the Hispanic electorate in America, we often speak in reductions. Their motivations and political interests are often misunderstood or defined too narrowly by campaigns and the news media. The diversity of opinion and history that exists within Hispanic communities is sometimes flattened.

Like all voters, they are multifaceted; their political behaviors and preferences are often products of age, region, education, and even their family’s immigration history.

Below are key facts about Latino voters, before the election. These figures have been culled from data provided by the Pew Research Center, the American Community Survey, and an interview with William Frey, a demographer at the Brookings Institution.

How many Latino voters are there? How has that changed since the last election?

There are more than 29 million eligible Latino voters in the United States in 2018, who make up nearly 13 percent of all eligible voters nationally. That is up sharply from 1998, when there were 12.4 million eligible Hispanic voters. Since 2016, an additional 2 million have become eligible to vote, according to the Pew Research Center.

And their share of the electorate is significantly larger in states like California and Texas, where 30 percent of eligible voters in each state are Latinos.

Six states have more than 1 million total eligible Hispanic voters, according to the American Community Survey: California, Texas, Florida, New York, Arizona and Illinois. (More on that below.) Many of those states happen to be home to some of the most competitive congressional and Senate races this year.

And though they are often thought of as a monolith, Frey warns that there are limits to thinking about Hispanic voters as a single voting bloc.

“There’s a tendency when you’re looking at these numbers to reduce them to simplistic categories. I don’t think even Hispanic voters think of themselves as a monolith,” Frey said. “In Texas, for example, Hispanics have not always voted as strongly Democratic. And Cuban-Americans, traditionally, have tended to vote Republican; though that might be shifting for younger Cubans. Protestant and evangelical Hispanics, they also lean Republican.”

Immigration is important, but it’s not everything.

Polling shows that Hispanic voters frequently list immigrant rights as a top voting priority, but often that is matched or outpaced by concerns about wages and jobs.

In California, for example, economic issues are a significant concern, according to a tracking poll of registered Hispanic voters released last week by Latino Decisions, a polling firm.

Education gaps and lackluster outreach may be related to lower voting rates.

Those numbers can vary drastically at the county and municipal level.

In areas where there is a significant education gap, increased contact through mailers, digital advertising and especially face-to-face canvassing are highly effective ways to increase turnout. (The same is true across voting blocs.)

But Hispanics are often not targeted by campaigns at all. In a tracking poll this week by Latino Decisions, 60 percent of registered Latino voters in California — where there are about a half-dozen competitive congressional races — said they had not been contacted by a campaign.

How does the Hispanic vote break down by ancestry?

The majority of eligible Hispanic voters in the United States are of Mexican descent, although numbers vary based on the state and region, according to data analyzed by Frey.

Taking a national view, 58 percent of eligible Hispanic voters nationally are Mexican, 13 percent are Puerto Rican, and 10 percent are Central American. An additional 5 percent are Cuban and another 7 percent are South American.

But that paints an incomplete portrait, and those differences can matter in state and local elections. Below is a breakdown of Hispanic eligible voters’ ancestry, based on data from the 2017 American Community Survey, which is administered by the U.S. Census Bureau, in the states with such populations larger than 1 million:

— In California, 80 percent of the state’s 7.7 million Hispanic voters are of Mexican descent; another 9 percent are Central American.

— In Illinois, 73 percent of the state’s 1 million eligible Latino voters are of Mexican descent; an additional 14 percent are Puerto Rican. Latino voters tend to be younger …

… and that probably contributes to lower turnout rates overall.

The larger share of Hispanic voters today has not been represented at the ballot box: An estimated 12.7 million Hispanics voted in 2016, out of 27 million who were eligible, a turnout rate of about 48 percent.

“The underlying demography is changing as the Latino population is a bigger part of the electorate,” Frey said. “The footnote to that is that the biggest growth in Latinos is among younger Latinos, children and those in their 20s, the age group that doesn’t vote as much.”

Hispanics do favor Democrats, but more voted Republican in 2016 than you might think.

In the 2016 election, 66 percent of Hispanic voters cast ballots for the Democratic Party, while nearly 30 percent voted Republican, according to exit polls at the time. (Some pollsters put the latter closer to 20 percent.)

Frey warned against thinking of Hispanic voters as a strict Democratic constituency.

“There’s some research to show that as more Latinos are in the country for second and third generation, they tend not to be as stridently Democratic over time,” he said.

Regardless, Latinos “are a bigger share of the over-18 citizen population than ever before. That fact alone, even if the turnout stays the same, should give them a little more clout,” he said. “They ought to be the target for people and campaigns who want to make them active in the next elections.”