White non-college Americans move away from Trump during shutdown 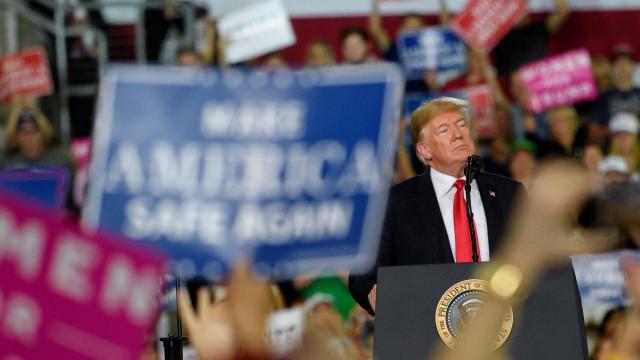 (CNN) — During the longest government shutdown in US history, President Donald Trump has been losing support among those who may be his strongest supporters -- white Americans who don't have college degrees.

Among this group, only 45% said they approved of the job Trump is doing as President, according to a recent CNN poll conducted by SSRS. That is the lowest level of support among this subgroup by 1 percentage point in CNN's surveys and a dip from a poll conducted in early December, before the partial shutdown, when 54% of whites without college degrees approved of his job as President and 39% disapproved.

The dip is notable since among whites who hold college degrees, Trump's ratings are largely unchanged in the last month and remain sharply negative -- 64% disapprove and 32% approve.

This trend is backed up by a new Quinnipiac poll released Tuesday. Approval for the President remained somewhat stable between its mid-December poll and now among whites without college degrees (down from 56% to 53%), but disapproval increased from 37% to 43%. That is going from a net 19% positive approval to a net 10% for Trump, a 9-point loss.

The January CNN poll found a majority of Americans placed most of the blame for the government shutdown on Trump (55%) over the Democrats in Congress (32%). Trump has tried to push back from his December claim that he would be proud to shut the government down.

"So, I will take the mantle," Trump said in December during a meeting with Democrats. "I will be the one to shut it down. I'm not going to blame you for it."

More recently, he's tried to shift the blame toward Democrats.

A plurality of whites without college degrees (45%) attributed the government shutdown to Trump, according to the CNN poll. Almost 2 in 5 blamed the Democrats in Congress. Among white college graduates, 63% said Trump was responsible and only a quarter blamed the Democrats.

In 2016, two-thirds of whites without college degrees voted for Trump and 29% voted for former Secretary of State Hillary Clinton. They're one of the President's strongest groups of supporters. The GOP support held true in the two most recent midterm elections, in 2014, when 64% of whites with no college degrees supported Republican candidates, and in 2018, when 61% did the same.