White House will not participate in Judiciary Committee hearing 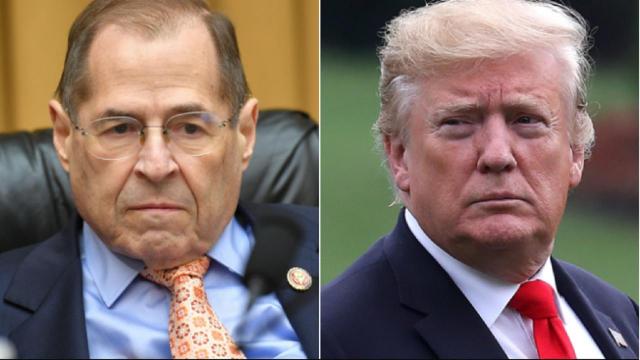 In a letter to Chairman Jerrold Nadler, White House counsel to the President Pat Cipollone said, "We cannot fairly be expected to participate in a hearing while the witnesses are yet to be named and while it remains unclear whether the Judiciary Committee will afford the President a fair process through additional hearings. More importantly, an invitation to an academic discussion with law professors does not begin to provide the President with an semblance of a fair process. Accordingly, under the current circumstances, we do not intend to participate in your Wednesday hearing."

Cipollone said they would respond separately to the Friday deadline about their participation in future hearings.

The Judiciary Committee's first hearing on "Constitutional Grounds for Presidential Impeachment" is expected to kick off a frantic month of activity in the House.

The judiciary panel is expected to hold multiple public hearings and then consider articles of impeachment, which it would approve to set up a possible House floor vote before Christmas that could make Trump just the third president in US history to be impeached.

Under the House-passed rules, the President's counsel is able to participate in the impeachment hearings in the Judiciary Committee, unlike the public hearings last month in the House Intelligence Committee.

CNN's Jeremy Herb and Paul LeBlanc contributed to this report.