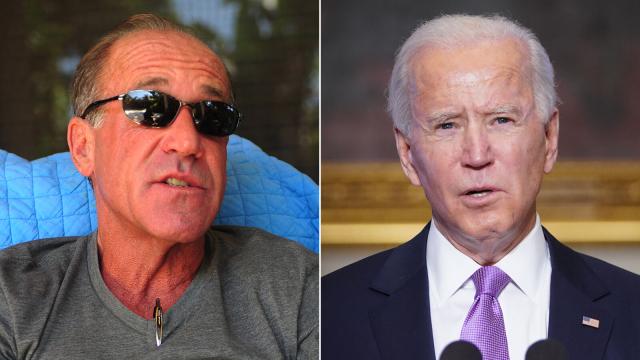 CNN — The White House said Thursday it is their policy to not let businesses imply they have President Joe Biden's support or endorsement, but declined to comment on the record about an advertisement in which Frank Biden touted his relationship to his brother. The ad for a Boca Raton law firm, for which Frank Biden is an adviser, ran in a local paper on Inauguration Day.

White House press secretary Jen Psaki on Friday maintained that Biden is "committed to ensuring we have the most ethically vigorous administration in history."

But she declined to detail any recourse taken in the wake of the ad when asked during Friday's press briefing.

The two-page ad, obtained by CNN, ran in the January 20 edition of the Daily Business Review, and points to Joe Biden's "commitment to environmental and social justice, a value shared by his brother and Berman Law Group senior adviser, Frank Biden," while also emphasizing a series of shared priorities between "the two Biden brothers."

"It is this White House's policy that the President's name should not be used in connection with any commercial activities to suggest, or in any way that could reasonably understood to imply, his endorsement or support," an administration official, who declined to be named, told CNN Thursday.

Psaki reiterated the same policy -- on the record -- Friday when asked about the ad.

CNBC first reported the ad. Neither the Berman Law Group nor Frank Biden immediately responded to a CNN request for comment.

Biden, throughout the campaign, faced scrutiny over his son Hunter Biden's businesses dealings including on the board of a Ukrainian natural gas company. Hunter Biden admitted in a 2019 interview with ABC News that holding that position while his father was vice president showed "poor judgment."

The White House stated policy of not permitting the use of Biden's name for commercial activity stands in contrast to the ethical practices of his predecessor, former President Donald Trump, who often used the trappings of office to promote his own business interests, setting up the appearance of numerous conflicts of interest.

Trump turned over the day-to-day running of the Trump Organization to his sons. During his presidency, he spent more than 425 days at one of his namesake properties, including more than 300 at one of his golf clubs. He often stayed at his own hotels and properties when traveling, billing the federal government millions of dollars, including for Secret Service agents to stay at his properties while protecting him.

As his Washington hotel became a hotspot for loyalists and foreign officials, some ethics experts raised questions about potential violations of the Emoluments Clause of the US Constitution, which bans federal officials from taking payments from foreign governments.