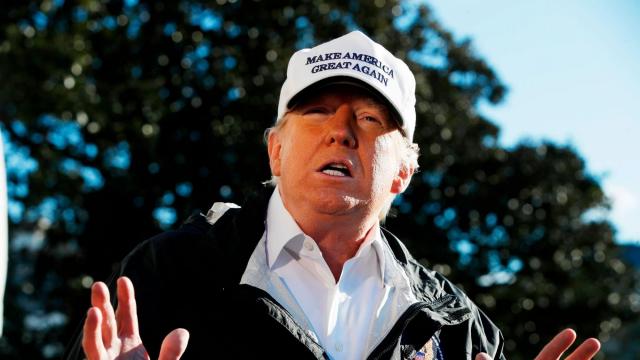 (CNN) — White House lawyers have begun laying the groundwork for the legal defense of a national emergency declaration on the southern border, officials familiar with the matter said, acknowledging the option remains a likelihood should President Donald Trump and Democrats not reach an agreement that would reopen the government.

Such a declaration would be subject to immediate legal challenge -- a reality the President's legal aides have anticipated and already sought to build a defense against, according to the officials.

That has included advising the President's aides on ramping up talk of a humanitarian and security "crisis" at the border, a characterization administration lawyers could use later in court to defend a national emergency.

Trump and others in the White House began using that term more frequently over the past week. The lawyers have suggested the more times the term is used, the more citations they will have in filing a legal defense.

Trump's critics have said any talk of a "security crisis" is manufactured, citing statistics showing border crossings have decreased over the past decade. And they have pointed to administration numbers that indicate a terror threat on the border is overblown.

Democrats do acknowledge a "humanitarian crisis" on the border as more families seek to gain asylum in the United States. But they have said it is a crisis of the administration's own making.

Trump visited the border near McAllen, Texas, on Thursday, hoping to maintain the impression of an unfolding crisis during briefings with law enforcement and immigration officials.

While there, he voiced confidence he would prevail in any legal challenge to use of his authority.

"Perhaps somebody would sue to stop it. But we would win that suit very quickly," he said as he toured a stretch of the Rio Grande with a group of law enforcement officers.

"I'm prepared for anything," Trump said. "The lawyers tell me like 100%. That doesn't stop people from suing."

Earlier in the day, as he departed the White House, Trump said his legal team had advised him he has the "absolute right" to issue a national emergency declaration.

"If we don't make a deal, I would say it would be very surprising to me that I would not declare a national emergency and just fund it through the various mechanisms," he told reporters before boarding his helicopter.

He said "there's more than one mechanism" to secure funding for a border wall without congressional approval.

A national emergency declaration has not gained widespread support among Trump's aides, but most have come to recognize the step is a likely way out of a deadlocked negotiation over reopening the government.

On his trip to the border, Trump was originally scheduled to take along his new White House counsel, Pat Cipollone, who has overseen the legal review of the possible emergency declaration. Cipollone did not ultimately take the trip with the President.

Initial conversations about using the President's executive authority to secure border wall funding have been ongoing for months, officials said. Pentagon, White House and Department of Homeland Security officials met in December to discuss avenues for the military to construct the border wall by using funding that could be tapped in the event that the President declared a national emergency.

More formal discussions about the process -- and the ensuing legal defense -- began more recently. White House lawyers have sought other ways to illustrate that an emergency is underway, recognizing a declaration would be challenged by Democrats. That has also included hosting lawmakers in the Situation Room for talks, a setting that lends to the sense of crisis.