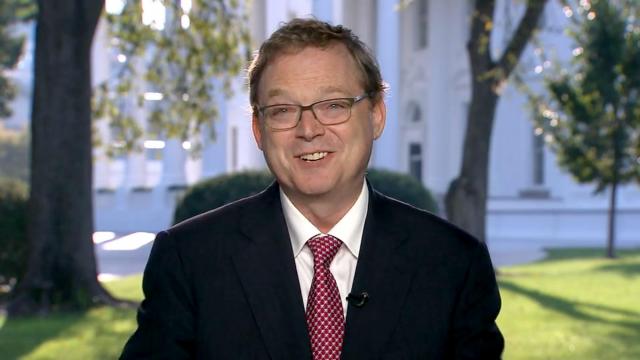 Hassett discussed the consequences of the shutdown, which is in its fourth week, with Fox Business Network's Melissa Francis on "After the Bell."

"Does that sound right? 1.7% for the quarter?" Francis asked of Hassett's revised estimates for GDP growth in the first quarter of the year.

"And so if government workers don't go to work, then they reduce their output calculations accordingly. We made an early estimate right at the beginning of the crisis that was a little bit lower than the estimate you just cited and have been studying hard as this has gone on and have found that actually the damage is a little bit worse because of government contractors, something that was excluded from our first analysis."

Hassett did not provide additional details about the estimates, but added that diminished spending by furloughed employees will be made up once they receive back pay after the shutdown ends, alleviating some of the damage.

"What's going to happen is that I think they've been promised that they're going to get the back pay -- which doesn't really help them right now when they're trying to pay the bills -- but in the fullest of time, when they get the back pay, then that means that there will be a rebound in government spending," Hassett said. "And so what will happen is it'll be lower this quarter and higher next quarter, assuming that this thing gets worked out by the end of the quarter."

"In the fullest of time, this should not have a long-run effect on GDP growth," he said.

Hassett's comments come as both he and the White House are facing increased scrutiny over the shutdown. Last week, he said in an interview on PBS' "NewsHour" that furloughed federal workers who are not getting paid during the shutdown are "better off" because they didn't have to use vacation days around the holidays.