Where to park, when to go: 6 tips for taking kids to the Raleigh Christmas Parade 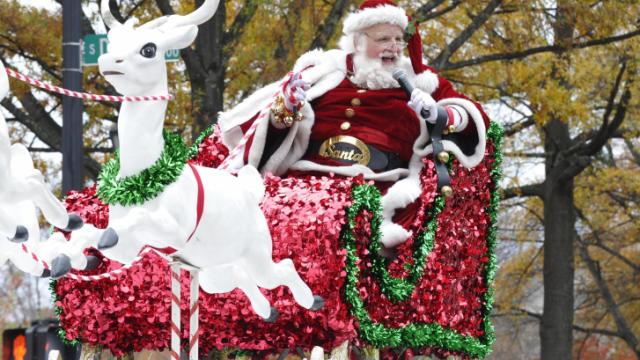 Editor's note: This annual post is updated for the 2021 season.

The Raleigh Christmas Parade is a more than 70-year tradition for downtown Raleigh.

Said to be one of the largest parades on the East Coast, the event features 115 entries and runs more than two hours as it travels down Hillsborough Street, weaves around the State Capitol Building and, finally, makes its way down Fayetteville Street. Tens of thousands of people line the streets - many people deep in some places - to see the bands, floats, balloons, entertainers and, of course, Santa Claus, himself.

Christmas parades aren't exactly part of my holiday tradition. Growing up in central New York State, I was used to snow sculpture festivals. But, when my older daughter was 2 many years ago, my husband and I decided to check it out. Maybe it was the look in our daughter's eyes, the squeals of excitement or just a happy family morning, but, for whatever reason, we were hooked. We've been back every year - including the year I buttoned up younger daughter, then 2 months old, in my oversized winter jacket because it was absolutely frigid.

In the last decade, we've learned a lot about how to make the parade experience the best it can be - especially on those cold, rainy mornings. We've figured out a strategy that works pretty well - thanks, in large part, to my husband, who leaves the house by 7:30 a.m. to reserve spots for the rest of us so we can roll in about an hour later.

Don't expect to get there around 9:30 a.m. and find a prime parade viewing spot. Many people get there a couple of hours early to reserve a great spot along the route. Event organizers say that guests start lining up at around 7 a.m.

Know where to park

I've always lucked out and have found spots in the Glenwood South area. But, I'm also very familiar with downtown parking options. Believe it or not, there is a lot of parking available in downtown Raleigh – on the street, which is free on Saturdays, and in parking decks. City-owned parking decks will be free the morning of the parade.

The key is to know where to go and to be prepared for a little walk.

Here are the free parking lots in downtown Raleigh:

Bring some chairs and blankets

Be sure to bring whatever you need to be comfortable outside on pavement for a couple of hours. We bring some camp chairs and blankets. The adults sit on the chairs, the kids sit on the blankets, so they can scramble for the candy that's tossed their way.

Know where to go

I'm talking about the bathroom, of course. We go before we go in an attempt to avoid the port-a-potties that dot the parade route. But we also, often, end up buying some coffee from a coffee shop, so I don't feel so bad when nature calls.

Businesses will only offer restrooms for paying customers, so it might be best to plan your bathroom and snack trip together.

The city of Raleigh has a mask mandate in effect, so if you plan on entering any businesses, make sure you bring a face mask with you.

Some of the people on the floats and organizations in the parade toss candy at you. One year, we even got a warm breakfast burrito from a downtown taco shop. But we also bring a thermos of hot chocolate and some mini pumpkin chocolate chip muffins which, for whatever reason, I now make every year for the Christmas Parade. It wouldn't be the Christmas Parade without them!

5 great places for hot chocolate in the Triangle

Bring your patience - and have fun

Yes, it might be cold. Yes, maybe you've been sitting on pavement for hours. Yes, parking might be a little bit crazy. Yes, the kids might be on a sugar high from all the candy they've eaten. And, yes, it might happen the weekend before Thanksgiving - at a time when we should be focused on that holiday and not Christmas.

But if you go prepared, ready for the weather, and ready to just take it all in - the excitement and anticipation of the kids and the pride of the groups and individuals in the parade - it makes for a perfect way, at least for my family, to kick off the holiday season.