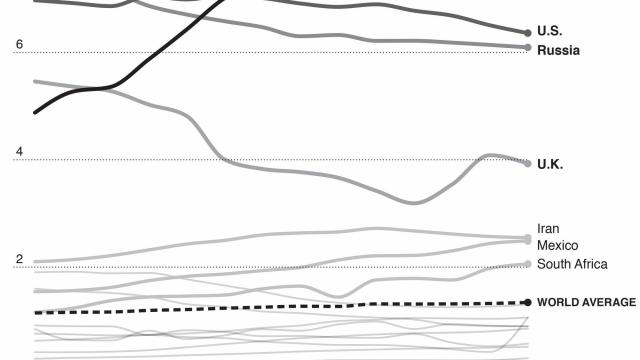 EDITOR'S NOTE: David Leonhardt, a former Washington bureau chief for The New York Times, won the 2011 Pulitzer Prize for commentary, for columns on the financial crisis. Lauren Leatherby is a data journalist for The Times.

The four large countries where coronavirus cases have recently been increasing fastest are Brazil, the United States, Russia and Britain. And they have something in common.

They are all run by populist male leaders who cast themselves as anti-elite and anti-establishment.

The four leaders — Jair Bolsonaro, Donald Trump, Vladimir Putin and Boris Johnson — also have a lot of differences, of course, as do their countries. Yet all four subscribe to versions of what Daniel Ziblatt, a government professor at Harvard and co-author of the book “How Democracies Die,” calls “radical right illiberal populism.”

This pattern isn’t a coincidence, many political scientists believe. Illiberal populists tend to reject the opinions of scientists and promote conspiracy theories.

“Very often they rail against intellectuals and experts of nearly all types,” said Steven Levitsky, Ziblatt’s co-author. The leaders, he said, “claim to have a kind of common-sense wisdom that the experts lack. This doesn’t work very well versus COVID-19.”

In Brazil, Bolsonaro fired his health minister and has repeatedly called for states to end stay-at-home orders. In the United States, Trump rejected the views of experts for almost two months, predicting the virus would disappear “like a miracle.” In Britain, Johnson’s government initially encouraged people to continue socializing, even as other countries were locking down.

All four leaders also flouted guidance on personal protective measures early on, refusing to wear a mask or continuing to shake hands.

The pattern is apparent beyond just those countries, too. Iran — a country with a theocratic supreme leader — is fifth in case growth over the past two weeks among countries with at least 50 million people. Health experts say the government did not heed warnings about reopening too quickly. Mexico — where President Andrés Manuel López Obrador is a left-wing populist whose government published posters saying the virus “no es grave” (is not serious) — is sixth.

An academic effort to track countries’ responses to the virus has shown that a delay in government reaction allows the virus to spread much faster, said Thomas Hale of the Blavatnik School of Government at Oxford University, who is leading the effort. Many of the countries seeing bad outbreaks now share a “late recognition of the urgency of the crisis,” Hale said.

Often, leaders who responded more slowly have cited the need to prioritize economic growth. But the trade-offs between the economy and public health may not actually exist, scientists and economists say: The fastest route to economic normalcy involves controlling the spread of the virus.

“There’s this false tension that exists between public health and economic health,” said Wafaa El-Sadr, an epidemiologist at Columbia University.

The flip side of the pattern involving illiberal populists is that countries run by women appear to have been more successful in fighting the virus, as some observers have previously noted. Germany, New Zealand and Taiwan are all examples.

The connection between populist leaders and bad outbreaks is not perfect. Viktor Orban in Hungary and Rodrigo Duterte in the Philippines are also illiberal populists who responded quickly. Case counts appear to be relatively low in both countries. Both Orban and Duterte have used the crisis as an excuse to crack down further on political opponents.

But global patterns usually include exceptions.

“There is in fact a pattern,” Levitsky said. “Populists don’t like experts — or relying on experts — and an anti-expertise response to the new coronavirus is deadly.”

Some populist leaders, like Johnson and Recep Tayyip Erdogan of Turkey, have recently begun taking the virus more seriously. In the United States, Trump’s response has varied almost by the day and has also been diluted by the federalist system, in which governors are making many decisions.

Still, Hale suspects that populist countries may continue to struggle more than others.

“We’re looking at the initial wave now,” he said, “but it’s going to be a long journey, and my strong intuition is that countries with really robust governance systems will be the ones that do best at the end of the day.”