When Will Tourists Be Able to Return to the Florida Panhandle? 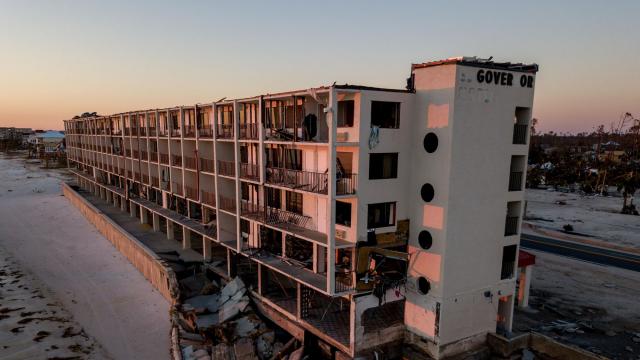 “Our unit is totally gone,” said Michael Allen, a homeowner in Mexico Beach, Florida, one of the towns on the Florida Panhandle hit hardest by Hurricane Michael in October.

“Our windows were all blown up, pieces of sliding doors all blown out, with these gaping holes between. If you’re outside,” he said, “you can see what’s left of the unit looking inside through what had been a wall. All of the furniture had been strewn away. It’s just terrible.”

Allen, who lives in Tennessee, rents out his two-bedroom Florida property — just a flight of stairs above the sand, with a balcony overlooking the ocean — to snowbirds each winter. His next guests were scheduled to arrive on Dec. 1 for a three-month stay. But after the Category 4 hurricane devastated this part of northwest Florida, destroying swaths of Bay and Gulf counties, Allen and many others in the storm’s path no longer have anything to lease.

The Panhandle, known for its postcard-quality beaches and charming seaside towns, is a year-round destination. And the final stretch of 2018 — including Thanksgiving weekend and the upcoming holiday break — would ordinarily be no exception. But following Hurricane Michael, the most severe storm in the history of the Panhandle, some mainstays in and around the “Emerald Coast” will not be able to welcome their usual crowds, a major financial hit for local homeowners and establishments.

Despite being evacuated or experiencing outages during the hurricane, the communities along 30A, the scenic highway between the city of Destin in the west and Panama City Beach about 50 miles to its east, were largely unscathed. And Panama City Beach, with the exception of some wind and water damage on its east end, was also spared. But just a couple miles away, Panama City suffered a tremendous blow. The infrastructure there, and in nearby Mexico Beach, will take years to rebuild. Beyond Bay County, recovery efforts are ongoing in Gulf County, which includes Port St. Joe, Cape San Blas and other inlets, with some businesses up and running again and others closed indefinitely.

Cell coverage and power have been restored in most places affected by the hurricane, according to the state’s division of emergency management, but Disaster Recovery Centers remain open and public assistance from the Federal Emergency Management Agency continues.

“We will have no rental business this year,” Allen, 62, said of Mexico Beach, where he said he and his wife will lose about $10,000 this winter on their now-uninhabitable unit. “There’s no infrastructure that a tourist would want or need for this winter. There’s no restaurants, the mom-and-pop shops are virtually all gone, so if I’m a tourist, as much as I love Mexico Beach, I wouldn’t go there.”

Rental homes and beach condominiums are among the most popular lodging options across the Panhandle, leased both through local property management agencies and through sites like VRBO and Airbnb. Neither company would confirm how many of its member homes were lost or critically damaged, but Kimberly Shoaf, president of the Mexico Beach Community Development Council, estimated that 60 to 75 percent of the rentals in Mexico Beach had been wiped out. As of Nov. 13, Airbnb had fewer than 50 online listings in the Gulf County area for the week between Christmas and New Year’s — a couple labeled “Not available due to hurricane” or “no one can stay in my unit.” VRBO had about 130 for the same period, half a dozen with similar notes. (Neither group would indicate how this compares to inventory there in a regular year.)

VRBO is advising those who have reserved rentals in the area to contact the homeowners to check the status of not only the property itself, but also the nearby beaches and businesses. “Whether or not a traveler can get a trip refunded or rescheduled depends on the cancellation terms they agreed to with the owner in checkout or in the rental agreement,” said Melanie Fish, a VRBO spokeswoman.

Airbnb’s policy in the wake of the hurricane is no different from any other time a host has to cancel a reservation: renters can receive a full refund or get a credit toward another reservation.

Panama City, which had 2,000 rooms of lodging, lost about 65 percent of its available inventory. But Panama City Beach, the county’s primary tourist destination, is mostly intact. Of the 20 hotels in Panama City Beach, a mix of high-rises, chains and boutiques, only the Sheraton Bay Point will remain closed until April, according to Dan Rowe, executive director of the Bay County Tourist Development Council; 90 percent of the city’s inventory was untouched. (The Hombre Golf Course and the Meadows Course at Bay Point have not yet reopened.)

Tourism boards are heartily encouraging people to visit and reassuring vacationers of their offerings and resilience.

“A lot of our visitors are ready to get back down here and help put some money into the economy as soon as they can,” said Kelli Godwin, executive director of the Gulf County Tourist Development Council. (One ad on the “Visit Gulf” website reads: “Thinking of canceling your Gulf County winter or spring vacation? Don’t throw in the beach towel just yet!”)

“We went from impassible roads, no water and no sewer until this week, but our county has opened back up, we have the necessities to keep it safe, and people are welcome to come,” Godwin said in early November, noting that St. Joe Beach, the county’s hardest-hit area, is one exception where a number of businesses and restaurants, like Paradise Craft House & Grill and Shipwreck Raw Bar, remain closed. Many of the neighborhoods along the 30A corridor that missed the brunt of the storm, like Walton County, are contributing to relief efforts by offering special hotel rates for rescue workers or hosting families that have been displaced. Others have found an opportunity in displaced renters.

Lynne Andrews, a homeowner in Santa Rosa Beach who rents out her three-bedroom cottage for more than half the year, said she is already booked for Thanksgiving through VRBO. “It’s going to be a challenge more for Mexico Beach and Panama City Beach,” she said. “I do suspect that some of those renters will probably shift out to 30A.”

For Allen, who had been renting out his Mexico Beach home for eight years, the finish line to recovery is not near, and the future of the community is uncertain.

“The beauty of Mexico Beach is that it was this throwback to the old Florida of the 1960s and 70s — they didn’t allow chain restaurants or chain stores there; everything in Mexico Beach was mom-and-pop,” Allen said. “And so I think the big question is: Now that it’s almost entirely wiped out, what will it be in the future? Will it somehow try to recapture the quaintness that it was and that appealed to us as a family, or will some big developer come in and make it an extension of Destin and Panama City?”

The answer, he added, is that there isn’t one — at least not yet.