When Autumn Leaves Take Over 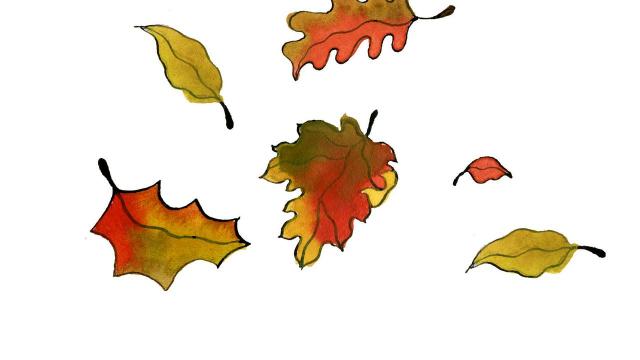 The maple tree in my backyard is probably my favorite, with leaves that turn from burgundy to a fiery red every fall. A close second is an oak across the street that glows yellow around the same time, stopping me in my tracks when I open my front door.

I gasp and gawk at the season’s colors, dragging the children on chilly hikes in the woods just to catch a better glimpse of the painted hillsides.

But by Thanksgiving, all that colorful wonder collapses like a drab, brown blanket on my lawn. I’m left with nothing but a rake and a dreary chore to remind me that winter is upon us and my neighbor can now see into my bathroom window until next spring.

When I finally get around to raking the crunchy carnage, I often think of Arnold Lobel’s children’s story, “The Surprise,” where Frog secretly rakes Toad’s leaves, just as Toad does the same for Frog. The amphibian pals finish their respective jobs and head home while the leaves do what they do best: blow back over everything. No matter, because Frog and Toad go to bed content, innocently believing that at least their friend has a tidy yard.

As for the rest of us, we are under no illusions that our work is anything more than a Sisyphean task.

“There’s a lot of hope involved,” said Timothy Smith, 48, who lives in a three-bedroom house in West Orange, New Jersey, with his wife and two daughters and has a fastidious leaf-management system that involves a tarp, a hefty rake and headphones, so he can entertain himself listening to Bone Pool Radio, a local station, as he creates a neat leaf pile on the street. “The idea is to do it strategically.”

If a strong wind blows the leaves back across the yard (or another round of leaves fall) before the town work crew comes to collect them, Smith, who works for Sony Music Entertainment, goes back out and does it all over again. “It’s a very cathartic thing to do,” he said. “You’re in your zone.”

But leaves, innocuous as they may seem, are not cathartic for everyone. They’re also a source of dread. Talk to commuters and you’re likely to get an earful about how errant leaves make them late to work because, oddly, the foliage deposits an oily residue on the train tracks, causing yet another reason for delays.

Then there are the piles on the curbs and sidewalks, which make irresistible playpens for children and fluffy bathrooms for dogs. For many of us, these shapeless heaps are just a slippery mess, and one we have to manage.

Perhaps the biggest source of leaf disagreement is how aggressively one should corral them. There’s a growing movement urging homeowners to put down their rakes and blowers and mow the foliage instead, leaving what’s under your shrubs alone to preserve a natural habitat for little critters.

Of course, if you’ve spent any time in the suburbs, you have encountered the more common solution: landscaping crews. These teams descend on homes en masse with their noisy, polluting leaf blowers, and in under an hour, obliterate any sign of life from a property, leaving behind a gloriously tidy lawn. Like roving hair dryers blasting away the earth, the method drives neighbors nuts. But get your yard scorched clean, and the experience is sublime.

Nidhi Sinha, 35, moved with her husband in June to South Orange, New Jersey, from Newport, a Jersey City neighborhood known more for its glassy high-rises than its foliage. She did not even know that she could pay someone for fall cleanup until she looked out her window one afternoon to see that the landscaper she had hired to mow her lawn was clearing her leaves. “It’s beautiful to watch,” said Sinha, a publicist. “It’s very satisfying to see him clean them all up and then it’s green grass again.”

Her first fall in the suburbs brought other surprises, too. In the city, fall felt to her more like a season experienced as weekend drives to the country. But now, the two dozen trees on and around her property seemed to turn overnight from a green canopy to a colorful one, and she felt, for the first time since she’d moved in, that she could stop worrying that she hadn’t decorated yet and invite friends over to enjoy a different beauty of her home, one she hadn’t curated.

With the trees nearly bare, she can actually see her neighbor’s house. After a decade spent living in a one-bedroom apartment surrounded by neighbors and other apartment buildings, Sinha is relieved to lose the privacy, even for half the year. “It’s comforting,” she said of her new view. “You kind of want to see a little bit of life.”

I prefer the privacy, and spend most of the winter waiting for the leaves to return so I can go back to believing that I don’t live all that close to so many other people.

Now that the leaves have decided to part ways with the branches, I’m not eager to move the debris. But the longer you wait, the more foliage you get. Fortunately for me, there’s the mow-in-place method, which I’ve embraced with enthusiasm. The mulch makes a home for caterpillars and other creatures to camp out over the winter. Come spring, the birds have a good meal, and the butterflies can emerge.

“That natural leaf litter is a natural habitat for a lot of animals. Lots of butterflies and moths overwinter in that,” said David Mizejewski, a naturalist at the National Wildlife Federation, which urges against the use of leaf blowers.

A big upside of leaving the leaves alone is you don’t have to do very much work. And as someone who likes to do as little as possible around the house, the “Make the Mulch of It” method appeals. Yet, I look at my neighbors, the ones with the well-manicured late autumn lawns, and can’t help but feel lawn lust. Wouldn’t it be nice to be tidy and neat?

Pascal Mittermaier, the global managing director for cities at the Nature Conservancy, says: No. “Let’s redefine what we mean by a beautiful backyard,” he said. “Maybe one that is covered in leaves is actually providing all kinds of unseen little services for us that we’re not aware of in our detached lives.”

As I contemplated the understated beauty of my unkempt brown yard earlier this month, I waited just a little too long and the inevitable happened. A late autumn storm arrived and covered my unfinished work with the first snow of the season, hiding all my leaves. Now what I have is a soggy mess, buried beneath something else to shovel up.