When Auctioneers Don’t Know or Can’t See Their Buyers 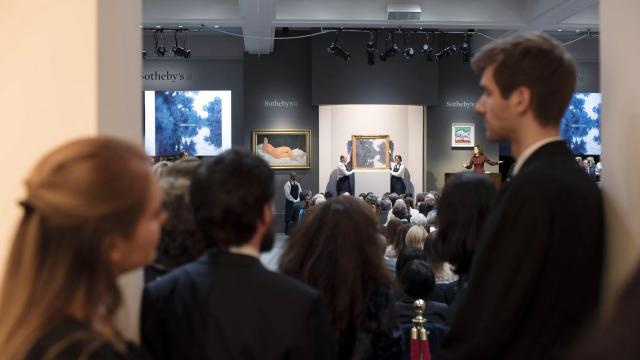 When the auctioneer Frederik Bruun Rasmussen stands on the auction podium for an evening sale at his family-owned auction house in Copenhagen, he hears a “pling” every time someone bids remotely through the live online bidding platform.

“Sometimes, suddenly you can hear this ‘pling, pling, pling, pling’ like a pinball machine,” he said. “That can be three or four people bidding against each other from all over the world. Then as an auctioneer you’re just standing there listening to the plinging, and finally it stops and you say, ‘OK, now it’s my turn.'”

Live online bidding came to some of the major fine art auction houses about a decade ago, but it was not until about five years ago that it became commonplace for auction sales. Today, it is a fundamental part of how auctions work, said Jussi Pylkkanen, global president of Christie’s and an auctioneer.

“In every single sale, our online bidding has a massive impact on the results,” Pylkkanen said. “It’s just become a quintessential part of the auction, the same as the gavel that auctioneer holds.”

At Sotheby’s, online bidding has accounted for a full 25 percent of all auction house sales this year, said Alex Branczik, head of contemporary art for Europe at Sotheby’s. “Online is now our most popular bidding platform,” said Branczik, who is also an auctioneer. “Almost half of our clients have used our online bidding platform this year, and it’s overtaken the telephones as a way of participating.”

Online bidding seems to be most successful at the lower end of the market, and in the less glamorous categories such as antique furniture, decorative arts and collectibles, while the high-value evening sales in categories such as old masters and contemporary and modern art still attract collectors of all types, as well as plenty of onlookers who come to see and be seen.

“It has grown steadily in terms of the number of clients who are choosing to bid online, and their comfort level with the level at which they’re spending has also grown,” Branczik said. “At the beginning it was relatively rare that you would find online bidders at a contemporary art evening sale,” he added, but now it is more common.

Pylkkanen, who has presided over a great many high-end sales at Christie’s, including the 2017 sale of Leonardo da Vinci’s “Salvator Mundi” for $450 million, said that for the highest level sales, people liked to watch live online, but usually don’t bid. “Definitely for major evening sales the vast, vast majority are in the room” or on phones, he said. “And when you get into less-expensive sales the balance changes rapidly.”

Buying live online has certain advantages for collectors: They can make bids from anywhere in the world, in the comfort of their own homes and maintain their anonymity. But isn’t it more difficult for auctioneers to handle bids that come from faceless individuals logging in behind a computer screen?

Bruun Rasmussen responds to the plings, and Pylkkanan learns of a new online bid because the new price that has been bid appears on the sales screen and the screen itself changes color. Branczik sees new bids on a screen at Sotheby’s, but the screen’s color doesn’t change. Henry Highley, head of contemporary art evening sales at Phillips, said he recently started working with an iPad, on which he received the online bids.

Rasmussen, a grandson of the founder of the Bruun Rasmussen auction house, who has been auctioneering for decades, said that, for him, “conducting an auction is not as fun as it used to be,” because he is more often presiding over a nearly empty salesroom. And sales are far more unpredictable, he said, because bidders can pop up unexpectedly online.

In the past, the auction house would usually have known which clients in a room were interested in certain items, and it would have a “ring list” of potential bidders who wanted to be called by the specialists on the phone banks for specific lots. All of that gave the auctioneer a sense of who would be bidding and about how much they were willing to spend.

“It’s more difficult for auction houses to know who is going to bid on what,” he said. “You have more butterflies in your stomach because you don’t know if it’s going to be a good sale or a bad sale.”

Pylkkanen said that sometimes, online bidders would notify him in advance. “Some are very open about that, because they want to make sure that I don’t miss their bids,” he said. “Or they might tell me some special circumstances that they have with the bidding.”

Live online bidders aren’t identified to the audience in the house, except sometimes by the city or country from which they’re bidding. When international online bids come in in Copenhagen, Rasmussen said, it can sometimes get exciting because, “Then you can say, ‘We have New York versus China, and then we have a new bidder coming from Paris.'” This can give bidders in the room the confidence that there is truly global interest, which can encourage others to bid, he said.

Christie’s and Phillips also identify online bidders by city or country, but Sotheby’s does not. “We don’t do that because it gives away quite a lot of information,” Branczik said. “One thing that is of paramount importance to us is preserving the client’s anonymity.”

Highley feels that live online bidding has “definitely augmented the salesroom experience” because it creates more dynamism as bids are coming from three different quarters, and he has been taught certain methods for addressing live bidders.

“There’s certainly something about having someone physically in the room, the eye contact you get, the interactions that you might have with someone in the room, that kind of rapport with someone who you know wants the object,” he said. “But there are new techniques for trying to engage people on the other side of the world.” When trying to pace bids in the room against bids online, he added later in an email, “the general principle is to allow for some lag time.”

“Without being face to face, the auctioneer should typically wait a bit before closing the lot,” he wrote. “These buyers can sometimes be making an important decision on the spot, and you want to be sure that they have a fair amount of time to do so.”

For Branczik, “Probably the hardest thing with an online bidder is that when someone in the room is finished, they will signal to you, they’ll shake their head or the specialists on the phone will let you know they’re done.

“But with an online bid, it’s hard to know when they are out. They don’t say, ‘I’m out.’ They may elect not to bid at all.” The auctioneer will just have to wait to find out.