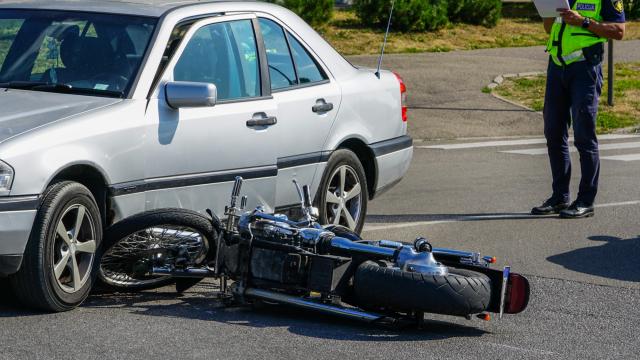 According to the Motorcycle Industry Council, more households than ever own one or more motorcycles. A survey revealed ownership has increased by more than 1.5 million households in the United States since the last full survey was conducted in 2014.

The rise in popularity of motorcycles means that more motorcycles will be on the road, which means there are more chances to get into an accident. Precautions by both motorcyclists and traditional vehicle drivers should always be taken, however, the unexpected can happen.

Here's what you need to know if you or a loved one drives a motorcycle, and what to do if you get into an accident.

Like driving any vehicle, riding a motorcycle presents all the standard risks of being on the road with others. However, motorcyclists must also consider potential dangers uniquely associated with riding a bike.

Driving a motorcycle means that riders have less stability and less visibility than a standard vehicle. Two wheels aren't as balanced as four, especially in emergency swerving and braking situations. Additionally, since bikes are smaller and more easily hidden by objects like cars, trees and elements like darkness, other vehicles are less likely to see them coming.

Rain and other weather conditions that make roads tricky for cars to drive on certainly present an increased challenge to motorcyclists as well.

"I believe that most motorcyclists are probably more careful than a typical automobile driver because they already know they're at risk — they have to pay more attention," said Bob Whitley, an injury attorney and founder of Whitley Law Firm in Raleigh. "However, I think the number one problem for motorcyclists is not being seen. Many vehicle drivers unintentionally do not see motorcycles — they just don't occupy the space that a vehicle does. As a motorcyclist, do whatever it takes to be as visible as possible."

Whitley suggested adding extra lights or even reflectors to your bike, and said to assume you are invisible to other drivers. Never share lanes with other vehicles. It also goes without saying you should never operate any kind of motorcycle or vehicle if you are under the influence of alcohol or drugs.

Since motorcycle riders are exposed to the elements rather than being in an enclosed vehicle, there is no barrier between the rider and the road. If you get into an accident while on a motorcycle, you more than likely will sustain injuries since there are no seatbelts or airbags to protect you. This is why it's imperative to always wear a helmet and protective clothing every time you ride.

"There's no question that motorcyclists are at a higher risk for injury if they get into an accident. You're not protected in any way except by a helmet and whatever gear you may be wearing. Most motorcycle wrecks result in generally more serious injuries," Whitley said.

Last year, almost 5,000 motorcycle drivers were killed in accidents. While motorcycle accidents aren't necessarily more common than other kinds of accidents, they are more likely to result in serious injury or death since riders are less protected than traditional vehicle drivers.

According to the National Highway Traffic Safety Administration, "Per vehicle miles traveled, motorcyclists are about 28 times more likely than people in passenger cars to die in a traffic crash. Motorcyclists continue to be overrepresented in traffic-related fatalities, accounting for 14 percent of all traffic-related fatalities, while representing only 3 percent of the entire registered motor vehicle fleet."

"There are no winners in an accident, but oftentimes the motorcycle rider is almost always on the losing end if they've been involved in a vehicle collision," Whitley said. "You always need an attorney if you've been seriously injured, especially if that injury came as no fault of your own."

Liability in motorcycle accidents is ruled by negligence.

North Carolina is governed by the rule of contributory negligence, meaning that even if you are found to be partially responsible for the accident (even by a fraction of a percentage), you are not entitled to any recovery. This may seem discouraging, but many times, the driver of the other car or truck is found to be the negligent one. This is why it's necessary to reach out to an injury attorney who can help you navigate your options after you've been in an accident of this nature.

Whitley recounted a time his firm helped a man who sustained a significant brain injury after getting into a serious wreck. The man, who was riding a motorcycle, was hit by a vehicle that was turning left into a driveway on a two-lane country road. The vehicle turned right in front of the man, who collided with it on his bike.

It was alleged that the man was speeding and was unable to stop before hitting the vehicle. However, Whitley sought out the expert whose research was being incorrectly applied to the case and was able to prove that the man was going at a much slower speed than previously declared.

"Whether you think you may have been at fault or not, it's important to speak with an attorney either way," Whitley advised. "Motorcycle riders get a bad rep for being reckless; but in my experience, these kinds of accidents usually happen because they weren't seen or compensated for by another driver."