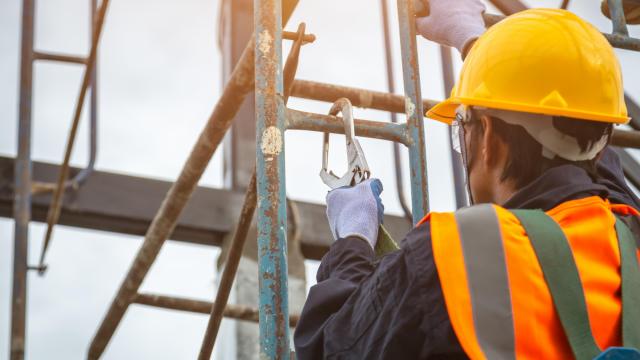 According to the Department of Labor, 4,500 fatal construction accidents happen every year, which translates to about 12 construction-related deaths every day.

In 2018, construction injuries accounted for almost one quarter of the nearly 5,000 total workplace injuries.

There are a number of risks associated with construction work, but none is quite as fatal as falls. In fact, out of all construction-related injuries, falls account for the most injuries and deaths, and inadequate fall protection was the most-cited OSHA violation in 2018.

Falls happen in a variety of ways, whether it's wearing improper safety equipment, malfunctioning equipment, or the fault of an individual or a third party.

The other main construction-related risks are being struck by an object, electrocution and being pinned between two objects. Together, these four risks are notorious by OSHA standards — earning the nickname of the Fatal Four — and are responsible for more than half of construction-related deaths. If these risks were eliminated, almost 600 lives would be saved every year.

If you've been hurt in a construction accident, here's what you should know.

Get a lawyer involved early on

For those injured on a construction or demolition worksite, they may be entitled to workers' compensation and a negligence claim. Since, however, there are often multiple parties running a construction site, determining responsibility in the case of an injury can be difficult.

"The question in many of these cases is going to be: who's responsible for the safety of a construction site? Many times, that responsibility ultimately falls on the general contractor, but there are a great number of rules and contractual language to sift through, and insurance policy coverage issues can often add more confusion to the process," said Ben Whitley, an injury lawyer and partner at Whitley Law Firm in Raleigh. "It's one of the many reasons why you need to get an attorney involved as soon as possible after an accident."

Have your attorney preserve evidence if and when possible

"Additionally, in my experience with construction accidents, the most important evidence can be found directly after an accident," Whitley continued. "In one case, we found that a safety sheet had not been signed off on after a site inspection on the day of the accident. If we hadn't gotten involved as quickly as we were able to, that evidence may never have been found."

Be aware of state and federal regulations regarding your case

Aside from the need to quickly collect evidence, the Raleigh area, specifically, has certain regulations that apply to an injured worker, and it's crucial to understand what's applicable in each situation. For example, when a workplace injury happens on an active construction or demolition site, both state and federal regulations apply. Additionally, the doctor that attends to injuries can play a critical role in building a case, as they're able to maintain and share relevant medical records.

Understanding these regulations and reaching out to the necessary medical professionals can be understandably overwhelming — especially for an individual suffering from a serious, construction-related injury. By working with a seasoned attorney, injured parties can take a weight off their shoulders, allowing their legal representation to fully explain their rights, gather necessary documents, and take charge of the process.

In one particular case Whitley recalls, a client was a steel worker on a demolition site. The roof of the building he was working in collapsed, knocking him unconscious in the process and resulting in multiple critical injuries.

"Not only did the client suffer from spinal cord injuries, which led to paralysis in his lower extremities, but he also experienced depression and post-traumatic stress disorder," Whitley said. "We were able to meet with the client when he regained consciousness at the hospital, and he was able to give us a full account of what happened. We also halted construction on the site and sent out preservation of evidence letters — which prevents any evidence on the site from being tampered with — to anyone involved. If we weren't able to get involved as quickly as we had, much of that evidence would have been lost."

For those who suffer a workplace injury due to a construction accident and don't enlist legal help as soon as possible, much of the evidence — whether physical or accounts from the victim and witnesses — can be lost or forgotten.

One of the first and most important steps after a workplace injury is getting in touch with a skilled local attorney — one who is familiar with local resources and regional laws and standards.