What we know about the New York terror suspect

TAMPA -- The man New York authorities say used a truck to kill at least eight people in Manhattan on Tuesday had an address in Tampa, according to media reports and a Missouri court record.

What we know so far about 29-year-old Sayfullo Saipov suggests the outline of an immigrant from Uzbekistan who has tried to make a living on the road as a truck driver, has had a few brushes with the law for traffic offenses and may have lived in several states.

Ohio resident Kobiljon Matkarov, who also comes from Uzbekistan, told the Tampa Bay Times he has known Saipov for several years. He said the two met in Florida. Matkarov lived in Fort Myers until about three years ago.

They were not friends, Matkarov said, though they are connected as friends through Facebook. Still, Saipov persuaded Matkarov to work as a truck driver, a job he still does.

The few times they did meet, Saipov made an impression on Matkarov's kids, taking time to play with them, he said. They responded to his happy personality.

Matkarov said he understood Saipov was married and had two or three children, although he never met any members of Saipov's family. Saipov had invited him to his wedding but Matkarov could not make it.

Their conversations were mostly small talk about work and families, said Matkarov, who has five children ages 1 to 18. 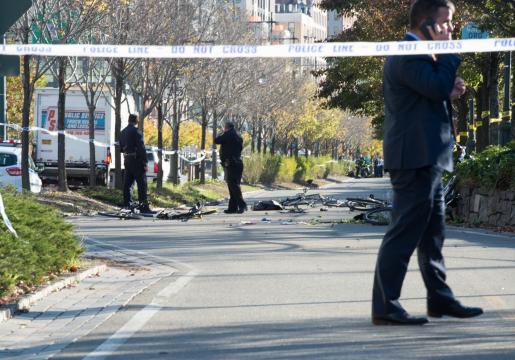 The last time Matkarov saw Saipov was during the summer when Saipov gave him a ride to John F. Kennedy International Airport in New York City. Matkarov and his family were traveling back to Uzbekistan for a vacation.

He said that Saipov was working as an Uber driver while living in New Jersey.

Matkarov said he cannot believe the man he knows would have committed the terror attack, even though his daughters on Tuesday sent him news reports that included pictures of Saipov. He fears people will blame the attack on Saipov's Muslim faith.

In Tampa, Saipov had an address at the Heritage at Tampa apartments off North 56th Street and north of Sligh Avenue, according to a commercial database that aggregates public records information about individuals from a variety of sources.

A woman at the apartment that was identified as Saipov's on residential records would not give her name, but said FBI agents were at her apartment Tuesday night, that she had lived in the unit less than a year and that she didn't know Saipov.

The Washington Post reported Saipov moved to the United States from Uzbekistan about five or six years ago. Dilnoza Abdusamatova, 24, told the Post that Saipov stayed with her family in Cincinnati for his first two weeks in the country because their fathers were friends.

She said that Saipov then moved to Florida to start a trucking company. Her family believes he got married about a year after arriving in the U.S. and may now have two children. Around that time, she said, he cut off contact with them.

"He stopped talking to us when he got married," Abdusamatova said.

The Daily Beast reported that Sayfullo Habibullaevic Saipov has a commercial driver's license issued by the state of Florida that would qualify him to drive a truck with an attached trailer.

Records related to a Maryland driving offense in 2011 indicate that Saipov then had an address in Fort Myers.

A "Sayfulloh" Saipov Facebook page, taken down at some point Tuesday night, listed 17 friends, including Matkarov. Several of the friends appear to be from or have ties to Uzbekistan. The page was last updated in 2013 and indicated then that Saipov lived in Cleveland .

Corporate records in Ohio show two companies incorporated by Sayfullo Saipov: Sayf Motors in Cincinnati in 2011 and Bright Auto LLC in the Akron suburb of Cuyahoga Falls in 2013.

Missouri court records show a misdemeanor arrest in April 2016 for Saipov, listing an address at the Heritage at Tampa apartments, for failure to maintain the required brake system on a motor carrier vehicle.