What was your worst concert ever?

A few weeks ago, I tweeted about an upcoming Nickelback and Bush concert at Walnut Creek scheduled on July 30. The reactions were classic.

People hate Nickelback with a passion I have never seen before.

But someone has to be buying those albums to keep them around? Right? Hmm...

Being a concert photographer for about 13 years, I have seen some great shows. And some terrible ones!

The whole Nickelback thing got me thinking about the worst concerts I've been to. 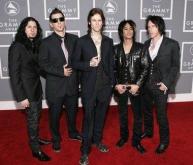 My worst concert was Buckcherry in the early 2000s - Not sure who they were opening for, but the lead singer sounded like a dying cat. It was awful. The band didn't even sound good. I was shooting the show (and I didn't photograph them because the music was just too awful), but I remember thinking about the poor people who paid to see this. Maybe they are much better now...I hope.

On the flip side: The best concert I've seen is a toss-up between Lady Gaga and the Barenaked Ladies.

Your turn: Tell me the worst and best concerts you've been to.