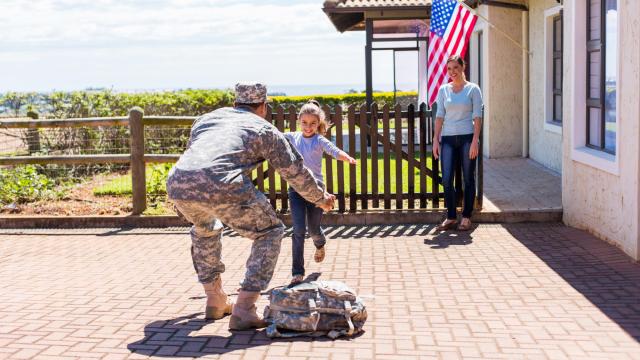 North Carolina is one of the top states with the highest numbers of total active duty and reserve members of the military, in large part due to its several military bases such as Fort Bragg, Cherry Point and Camp Lejeune. It is also home to 736,000 veterans, which account for almost 10 percent of the state's total population.

Many North Carolina families have direct ties to the military and supporting this community is important.

"One percent of the country is carrying the load for everybody else," said Dr. Chuck Harr, a WakeMed cardiovascular and thoracic surgeon, of the military population.

As Harr pointed out, servicemen and women dedicate their lives to the service and protection of millions of others — many even go off to faraway places for stretches of time.

So much happens when a loved one leaves home for active duty, especially if they witness combat. Military personnel can be separated from family and friends for months, communication can be sporadic if stationed somewhere with limited connectivity, and the service member and families are forced to find a "new normal."

While every situation is nuanced and unique, the return home can be both a joyous occasion and a challenging transition.

He said the transition of an active service member coming home can be difficult for both the military member and loved ones to navigate, but there are ways to help manage the changeover.

"It's a huge adjustment, even for people who don't have PTSD," said Harr.

Harr noted the guilt you can feel as an American coming back home to the United States and seeing the abundance of access to things like a variety of food at different grocery stores, technology and even running water. For those who have returned home from war while some of their military brothers and sisters haven't — there's the survival guilt they have to deal with as well.

"You would think you'd come back and be happy — you have been 'deprived' of something like a Coke for example. But people have a mentality of, 'I don't deserve it. I haven't done anything today. I haven't saved a life. I haven't been out on a mission.' It's really the guilt of feeling like they are not deserving of what they have," Harr explained. "Their routine gets totally disrupted and something that was their job everyday isn't their job any more."

Additionally, service members may feel isolated or misunderstood and also come home to a family that has changed or transitioned while they've been away. This can be hard for both the service member and their loved ones.

"The separation and divorce rate for military couples is higher than the national average — couples get used to living independently of one another and then have to figure out what their shared responsibilities will be, what their relationship boundaries are," Harr said.

While relationship dynamics may take time, whether it's a spouse, a friend, a sibling or a child who has just returned home, Harr offers the following advice:

Give the service member room, but let them know you care.

Harr said it's natural to want to prove how much they mean to you, but the service member is likely trying to figure out who they are when they come back.

"Realize it's not a rejection of you. It's just somebody who needs a little bit of room to figure out how they fit back into a world very different than the one they've been living in," Harr said.

If a service person is returning home to an old job or taking on a new role, this is also part of their transition. As Harr explained, it's not just about what goes on inside the home. Co-workers should be mindful of the time it might take to adjust or get the hang of things.

Accept them for who they are.

Active duty can change a person — it can change their habits, their demeanor and even their beliefs.

"It's hard to believe that there's a good God when you see some of the heartbreak and hardships that are in the world," Harr sympathized. "So things that may have once been an anchor for a service member, may be challenged in some ways."

The most important thing you can do is accept them for who they are and minimize judgement.

.Look out for symptoms of PTSD and other concerns

Sometimes a person may be out of reach and is struggling with things that a family member may not be equipped to deal with.

PTSD is common in active duty personnel, especially those who have witnessed combat. Look out for signs of PTSD and tactfully suggest professional help, always emphasizing that there is no shame in seeking out this type of assistance.

"Be patient — many of us self-heal. But also be diligent about looking out for symptoms. It may not always be lack of sleep, anger or abusing alcohol," Harr said. "I don't know anybody who has been deployed to a war zone who doesn't change some when they come home, and families detect that. Look for things like excessive risk taking and substance abuse."

During his time in the military, Harr said he worked with "some of the finest men and women he'd ever met." He's felt buoyed by his military brothers and sister then and in times since, and has witnessed first hand the challenges that come along with a loved one returning home from active duty.

Harr feels pride in his service, and so do the millions of others who choose to do this work. The greatest thing you can do, in Harr's opinion, is recognize the service and express your gratitude.

"I would encourage everyone to remember what their family member or loved one or friend did during their service," he said. "It's not about veteran discounts, it's about someone remembering to say, 'I appreciate your service. I don't understand everything that you did, but I understand that you sacrificed.'"