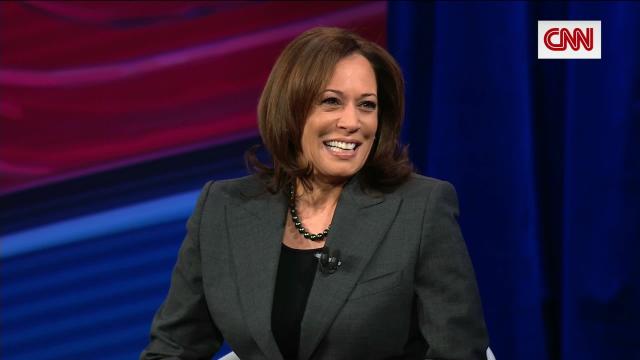 CNN — In a CNN town hall on Monday night in Iowa, this exchange happened between Jake Tapper and California Sen. Kamala Harris (D):

Tapper: ... initially co-sponsored by Sen. Bernie Sanders. You're also a co-sponsor onto it. I believe it will totally eliminate private insurance. So for people out there who like their insurance, they don't get to keep it?

Harris: Well, listen, the idea is that everyone gets access to medical care, and you don't have to go through the process of going through an insurance company, having them give you approval, going through the paperwork, all of the delay that may require. Who of us has not had that situation, where you've got to wait for approval, and the doctor says, well, I don't know if your insurance company is going to cover this? Let's eliminate all of that. Let's move on.

"That's not correct. That's not American," Schultz, who is considering running as an independent for president, said Tuesday morning. "What's next? What industry are we going to abolish next? The coffee industry?" added Bloomberg, who is weighing a run for the Democratic nomination: "To replace the entire private system where companies provide health care for their employees would bankrupt us for a very long time."

By Tuesday night, CNN had published a story that included this line:

"As the furor grew, a Harris adviser on Tuesday signaled that the candidate would also be open to the more moderate health reform plans, which would preserve the industry, being floated by other congressional Democrats. It represents a compromise position that risks angering 'Medicare for all' proponents, who view eliminating private health insurance as key to enacting their comprehensive reform."

Harris aides -- through the aggressive use of Twitter -- sought to push back on the idea that she was in any way, shape or form backing away from her initial support of getting rid of the private insurance industry in favor of a government-run system. Tweeted Harris communications director Lily Adams:

"Kamala Harris has advocated for Medicare for All for more than a year.

"She has also cosponsored other bills to increase coverage over the course of the last 2 years bc we like people having health care.

"Her preference is still Medicare for All."

Where you stand on all of that almost certainly depends on where you stand on Harris. Like her and you see her stance as entirely consistent. Cast a more skeptical eye and it appears as though her campaign was working to offer some nuance to her position that was lost in her "let's eliminate all of that" line to Tapper.

But take a step back, and what's readily apparent is how big (and contentious) a factor health care -- and, specifically, single-payer -- will be in the 2020 Democratic primary fight. In some ways, this is nothing new. After all, the 2010, 2012, 2014, 2016 and 2018 elections were all heavily influenced by health care fights -- largely centering on President Barack Obama's Affordable Care Act. What's different about the coming 2020 fight is that the debate is centered on a proposal that even as recently as a few years ago produced eyerolls among most establishment Democrats.

When Vermont Sen. Bernie Sanders (I) ran for the Democratic presidential nomination in 2016, he put "Medicare for all" front and center. In releasing the details of his plan -- which was projected to cost $1.38 trillion per year -- Sanders said this:

"Universal health care is an idea that has been supported in the United States by Democratic presidents going back to Franklin Roosevelt and Harry Truman," Sanders said in a statement. "It is time for our country to join every other major industrialized nation on earth and guarantee health care to all citizens as a right, not a privilege."

Hillary Clinton repeatedly attacked the idea of single-payer as pie-in-the-sky stuff that not only would never come to pass, but threatened to open Pandora's box in terms of attempts to repeal or replace the ACA. "I want you to understand why I am fighting so hard for the Affordable Care Act," Clinton said in Iowa in late January 2016. "I don't want it repealed, I don't want us to be thrown back into a terrible, terrible national debate. I don't want us to end up in gridlock. People can't wait! People who have health emergencies can't wait for us to have a theoretical debate about some better idea that will never, ever come to pass."

Clinton won the primary but lost the policy war. Virtually every Democrat looking to lock up liberal votes in 2020 has endorsed "Medicare for all" over the past few years. That includes Harris, as well as Sens. Kirsten Gillibrand (New York), Elizabeth Warren (Massachusetts) and Cory Booker (New Jersey) -- not to mention Sanders, who is likely to also join the race. Notably, former vice president Joe Biden, 2020's ostensible Democratic frontrunner if he gets in, has not been supportive of single-payer in the past.

Much of that change is attributable to the fact that the energy within the Democratic Party is, at the moment, consolidated in its liberal base. And that that base, in the age of Trump, favors bold politicians who stake out clear progressive policy positions and don't back down amid GOP criticism.

What's clear from the Harris dust-up is that there doesn't appear to be much room for nuance or hedging when it comes to support (or opposition) to "Medicare for all." It appears to be the first sort of litmus test of liberal purity at work in the 2020 Democratic race.

While supporters of "Medicare for all" are the loudest voices in the debate, right now, they aren't the only ones.

Jim Kessler, the founder of the centrist think tank Third Way and a former staffer for Sen. Chuck Schumer (D-New York) called single-payer "box office poison," adding of Harris: "She's a great candidate and shouldn't paint herself in a single payer corner. It polls well until people hear the details." (There's some polling evidence that Kessler is right about that.)

Harris and her team clearly disagree. And Bloomberg, Biden and Schultz disagree with them. The next year of presidential campaigning will prove who's right.