What’s That Strange New Thing Rising in the Hudson River? 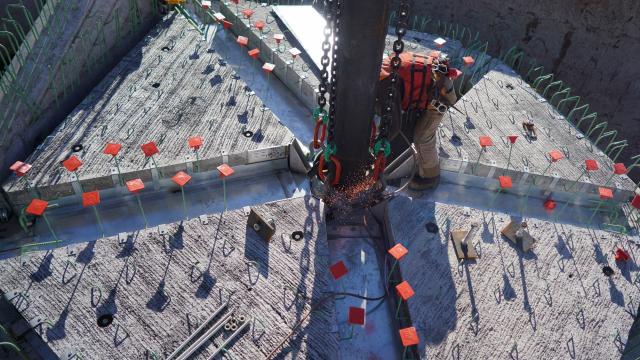 NEW YORK — There is something strange rising in the Hudson River, the likes of which New York City, and the world, has never seen.

It’s Diller Island, a park and performing arts venue being built on pilings over the Hudson River, along the West Side of Manhattan.

Known more formally as Pier 55, it is expected to open in spring 2021, and it will surely steal some of the spotlight from the nearby High Line, which has gained international renown and become one of the top tourist draws in New York City since opening in 2009.

Pier 55 has already drawn attention for its astronomical price tag — currently $250 million — that is being footed by entertainment mogul Barry Diller and his wife, fashion designer Diane von Furstenberg.

Aside from becoming nicknamed after Diller, the project also was known for its on-again, off-again status, with a frustrated Diller briefly abandoning the project last year, after a pitched battle with an opposition group.

But it is back on track, and after seven years of planning and bureaucratic maneuvering the park has begun to take shape over the water, just west of the Meatpacking District.

Its stylistic cornerstone was laid this week, as workers began installing a distinctive system of concrete supports known as pots, which give the park the unusual design Diller sought to make a bold architectural statement.

“I like building things that at least add something,” he said in an interview. “People may say, ‘We don’t like it,’ but at least it is a project that people’s eyes focus on and they say, ‘Wow, that’s interesting.'”

The park will also serve as a performing arts center, with a 700-seat amphitheater for music, dance and theater productions developed by playwright George C. Wolfe and producers Scott Rudin and Stephen Daldry, among others enlisted by Diller.

For the park’s design, Diller hired renowned British designer Thomas Heatherwick, who envisioned an undulating 2.4-acre platform that rises out of the river like a green Neverland, supported around the perimeter by clusters of Champagne-glass-shaped pots sprouting from pilings sunk into the riverbed.

The pots are a signature feature of the park’s structure and serve as huge planting containers that help form the park’s sloping sections.

Visually, the park will seem to rest on the 132 pots, as if nestled on an uneven bed of tulips.

“One down, 131 to go,” Rick Palmer, an official with Weeks Marine, said as its 350-ton crane lowered the first pot into place, beginning an installation process that is expected to last through early 2020.

Although the high-design construction has only recently begun, the more straightforward, utilitarian portions have been underway, including the two walkways that will connect the park to the shoreline and make it part of Hudson River Park, which runs along the waterfront from lower Manhattan to midtown.

“This stuff is cookie-cutter,” Aronne said, pointing to concrete slabs on the flat pier.

“This isn’t,” he said, pointing to the first four pots, which had traveled down the Hudson by barge from upstate New York, where they had been fabricated.

“It’s all once-in-a-lifetime kind of stuff,” Aronne said. “It’s all never been done before.”

The largest pots are about 30 feet tall and weigh more than 90 tons. It falls to a team of dock workers to attach them to a crane set on a mammoth barge. The workers use cables, shackles and ropes to keep the pot level and in position to be placed precisely atop a narrow concrete piling.

Nodding toward the crane operator, Aronne said, “He’s got to thread the needle from 200 feet in the air.”

At the Fort Miller Co. concrete plant in Easton, New York, some three hours north of Manhattan, each pot is made from its own custom-sculpted foam mold.

The pots consist of four to six segments, or petals, cast in a lightweight concrete to minimize the weight on the pilings.

“For the most part, they are all unique. There is nothing flat on them,” said Butch Marcelle, a director at Fort Miller, which has fabricated many infrastructure elements for New York City, but has had to invest in new equipment and engineering software to handle a job that is unorthodox and complex.

“It’s the most difficult project we’ve ever undertaken,” Marcelle said.

From the plant, the pots are trucked an hour south to the Port of Coeymans marine terminal on the Hudson, where the petals are assembled into complete pots and loaded by crane onto barges to be transported to Manhattan — a far better alternative than the challenge of trying to truck the delicate pots into the city.

Since the park’s inception seven years ago, its budget has grown to $250 million from $35 million, mainly because of the design complexity and legal wrangling over its placement in a protected estuary in the river.

Opponents of the project, a group of environmentalists backed by real estate developer Douglas Durst, filed a series of lawsuits and assailed the secrecy surrounding the project, calling it an environmental threat, a playground for the affluent and a monument to a billionaire’s ego.

Last year, after five years of design and engineering work, as well as outreach to secure local support, Diller pulled the plug on the project, only to revive it a few months later when Gov. Andrew Cuomo brokered an agreement to help settle the dispute.

Diller said in an interview that he had grown discouraged after a park he considers a public amenity was mischaracterized by opponents. “It was a gift to the city and the people of New York, and then to have it opposed by what turned out to be narrow reasons not having to do with the public interest, it was devastating,” Diller said, noting that Cuomo and Mayor Bill de Blasio support the park.

“It may be the one thing,” Diller said, “that they both seem to totally agree upon.”