What’s ‘Quintessentially Korean’? The Monk? The Waterpark? Both? 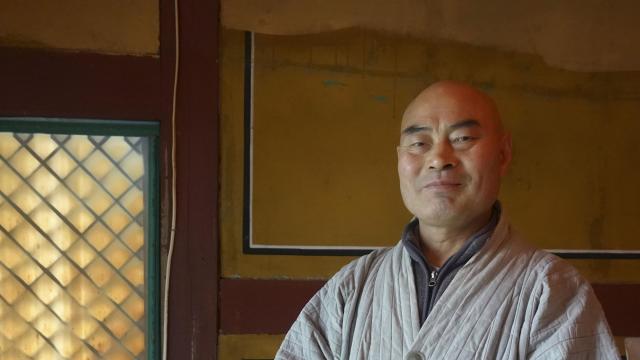 Rising out of the mist and pine trees on South Korea’s mountainous eastern coast was a serpent. Or at least it looked that way as I awoke, groggy, and peered out of my hotel window at a colossal undulation of orange, purple and teal stripes snaking through the forest canopy. Two blinks later, the shapes and colors morphed into what they actually were: the twisty, tubular slides of a water park.

“Quintessential Korean experience,” my friend Jean H. Lee had written next to a note about water parks in a tailored guide to Gangwon province she had sent to me from Washington, D.C., where she runs the Korea program at the Wilson Center. Jean still keeps an apartment in Seoul and was snowboarding on the slopes of Pyeongchang long before they had been home to the Winter Olympics.

The Games brought a new high-speed KTX train and gleaming white hotel towers with infinity pools overlooking the ocean (see: Goldon Tulip Skybar and the Richard Meier-designed Seamarq). Those mountains, though, loom largest, keeping the new Gangwon in harmony with the old.

Temperatures were already in an overcoat zone when I arrived, but the region was still packing in Seoul residents leaf peeping away from smog and tourists from all over Asia taking selfies in the locations where their favorite Korean TV dramas, like “Winter Sonata,” were shot. I had been touring the province, from the Buddhist temples of Pyeongchang to the endless coastline of Gangneung, with the help of a Seoul-based travel writer, Hahna Yoon, whom I had met indirectly through Jean.

But on my last stop, in the city of Sokcho, just south of the Demilitarized Zone, I was on my own — and possessed with the Korean language skills of a mime.

Hahna had told me that my $90 hotel, Hanwha Resort Seorak Sorano, had a famous bathhouse, or jjimjilbang, that people came from all over the country to visit. Earlier in this 52 Places trip, I had stayed at (and loved) the Holiday Inn Waterpark in Orlando, Florida. I had never imagined, though, that I would see that kind of family-fun excess in a Korean forest.

“Go straight, walk five minutes,” the hotel clerk told me when I asked how to find the jjimjilbang entrance. I did as told and got lost on a dirt path next to a stream lined with trees whose vivid yellow and red leaves were still clinging to their branches, just barely. There were tasteful bronze sculptures of naked women here and there, and a path around a placid lake built for contemplative strolls. I passed young families pushing strollers and old men meditating on stone steps built into a hillside. And then there was the child on a bicycle playing a video game at full volume, just as nature intended.

When I finally got inside, those twisty slides were closed for the season but there was still a wave pool and rivers of warm water and tiers of hot springs. Inside, men and women filed into separate facilities, which involved stripping naked, soaking in a really hot bath, jumping into a cold one, and repeating. It is a sensation everyone should try at least once.

Later, I walked onto a pavilion over the lake and had to laugh. I was standing under a mock temple roof, looking across a body of water to the mountains, with a grove of red Korean pine trees to the right and that glorious gaudy water park on the left. It was a scene so perfectly Gangwon it could have been a scroll painting.

Of Mountains and a Monk

I had not taken a two-hour night bus to Sokcho from Gangneung to see a hotel water park, though. My personal must-do of the trip was to hike in Seoraksan National Park, home to the region’s highest mountain and legendary fall foliage. I had missed peak leaf peeping by a week or two, but there were still a few trees that looked like they had been dipped in red and yellow Kool-Aid.

At the top of the park’s cable car was a 20-minute climb to a rock face known as Gwongeumseong Fortress, the highest peak in the park and bare, with the exception of an occasional pine, bent over from the wind. I saw a woman hiking in heels, and a couple in matching red, black and white Mickey-Mouse-themed outfits. The only safety barriers between selfie-takers and precipitous cliffs were little 4-inch signs featuring a tumbling purple cartoon bear and the words “drop” or “fall.”

There were also Jenga-like towers of stacked stones, left behind by previous visitors engaged in a Buddhist meditative tradition I had seen practiced all over the province. The day before, at Woljeongsa temple on another mountain near Pyeongchang, Hahna and I had watched a little boy stack his stones, then clasp his hands in prayer and wish for “grandpa to be happy in heaven.”

Back at the cable car, I spotted a sign reading “Aallack Temple” with an arrow pointing down a steep set of stairs no one else seemed to be taking. Metal gave way to slabs of stone laid flat between tree roots. Instead of a railing there were thick ropes attached to poles, and with so much slack and weight from recent rain I had to bend down to grab them. The sensation was less like walking on stairs than rappelling, sliding the rope through my hands and hoping that it would catch me if I fell the rest of the way, which seemed possible.

After many more stairs than I had anticipated, I reached the temple, a single structure overlooking a valley. The steps continued to a dead end. Just as I was taking my final photos and heading back, a bald man in gray robes with a big smile poked his head out of the door.

“Where are you from?” the monk asked, in hesitant English.

“USA” I told him. He nodded vigorously and invited me inside. There, in front of a gold Buddha, under a ceiling alight with lanterns shaped like lotus flowers, I told him my name and he told me his, Jee-Woon, and we had pretty much exhausted our language skills.

He offered me tea he had been warming on a wooden stove and this time I pulled out my phone to try Google Translate, which seemed to be a new thing for him. He spoke into the microphone and told me that he had made the tea, which was delicious and earthy, out of five medicinal ingredients that were supposed to be good for health, like jujube and licorice. Was he alone, or “honja” in Korean? I asked.

I was honja, too. We smiled and sipped our tea.

I told him I was grateful he had shown me his beautiful temple.

As I walked out the door, he crouched down to make sure I got my shoes on. “See you tomorrow,” he said, again and again; I think it was the last English phrase he knew.

“See you tomorrow!” I said back. And really wished I could.

Jal Meogeosseumnida, or ‘I Ate Well’

Jean’s last, most stringent directive had been to eat. Eat well, eat often, and when out in the country, get to restaurants well before 8 p.m. if you want to eat at all. Both she and Hahna told me that Koreans in Seoul consider the food so much better in Gangwon they make special trips for it — while foreigners make trips around the world to eat in Seoul.

Craft beer and pour-over coffee are both big trends in Gangneung (try Budnamu Brewery, Terarosa Coffee and Bohemian Roasters), but I was more amazed by the lush gardens of kimchi cabbage growing next to ordinary roads. One morning, Hahna took me to the city’s tofu village — an entire district of restaurants focusing on fresh tofu. We had tofu in a spicy stew (soondubu), in soft bean curd broth and in big fluffy squares with a limitless supply of pickled perilla leaves, which I now want as a side dish for every meal. By the time we left the restaurant, Chodang Halmoni Sundubu, the line to get in was 20-people deep. Another night, at Kundori Izakaya, we ordered the small portion of a raw fish dinner for two people ($92) and got around 10 appetizers, enough sashimi to feed a small army, then fried chicken, pasta Bolognese, fried shrimp and vegetable tempura. We were saying we could not eat a thing more when they brought out a seafood stew.

Between meals, we snacked on dakgangjeong, or sweet crispy chicken, plus a dessert of hotteok, or fried dough filled with brown sugar and ground sesame seeds, at Gangneung’s Jungang Market. A food court led me to my new favorite cold noodle dish, bibim makguksu, a variation on a Gangwon specialty.

But the meal I will remember forever was at Buil Sikdang, a fluorescent-lit “mountain vegetables” restaurant in Pyeongchang with tables on the floor that you reach by walking through the kitchen. We had tried four other mountain vegetables spots, but they had all closed to go to a wedding before Hahna remembered talking to Jung Sik Yim, a meat-loving Michelin-starred chef in New York City, about this one vegetarian place he liked. We ordered the standard meal for two, which began with 22 small plates of vegetables I had never tried like naengi (shepherd’s purse shoots); even with add-ons like rice wine and a pricey, delicious root, deodeok, it came to $38.

Hahna taught me to tell the chef, “Jal meogeosseumnida,” or “I ate well.”

Communication: Renting a portable Wi-Fi hot spot at the airport was a genius suggestion from Jean and gave me four times as much data as a prepaid SIM card. Next, download Kakao Talk, the data messaging service that is the South Korean equivalent of China’s WeChat. It will help when talking to people with Korean phone numbers, and is necessary for downloading Kakao T, the crucial app for hailing cabs, and Kakao Maps, which is far more accurate than Google Maps.

Transit: Gangwon-do is rural. While public transport is doable, you will have the most flexibility with a car. As I found out too late, though, you will need an International Drivers’ Permit to rent one. Get your IPL from AAA before you leave.

Money matters: Foreign credit cards work everywhere, even for small transactions — except at train kiosks, which require cash. International internet purchases have some strong security measures that make them difficult even for Koreans. I had to call a friend in the States to help me book a plane ticket.

Sights: I loved stopping at Museum San, or Mountain Museum, a world-class sculpture park designed to highlight the beauty of the mountain scenery near the city of Wonju. Time your visit to see the James Turrell exhibition. If I go back, I want to spend a week in Sokcho just going on hikes at Seoraksan and then soaking the day away in that crazy amazing jjimjilbang.