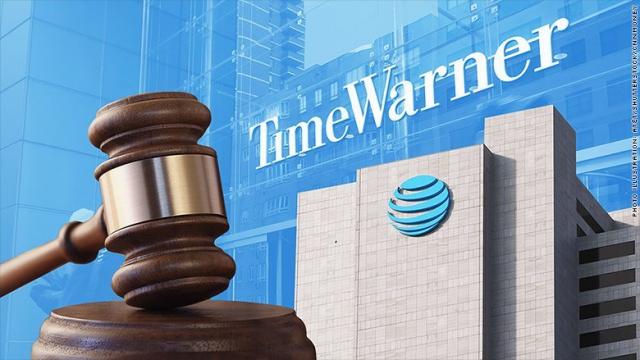 NEW YORK (CNNMoney) — Judge Richard Leon issued a stinging rebuke on Tuesday to the Justice Department's attempt to block AT&T's $85 billion bid to acquire Time Warner. But that doesn't mean the case is over.

The Justice Department can appeal the ruling, and the department's antitrust chief, Makan Delrahim, is considering that option.

"I think the constitution and the statues allow for due process for all litigants and we will take a look at what the next steps are," Delrahim told reporters outside the courthouse following Judge Leon's ruling.

The Justice Department could seek a stay of his decision, essentially freezing the combination of the two companies while the case works its way through the appeals process.

But the Justice Department would have to go through Judge Leon first, and in Tuesday's hearing, he used unusually strong language to discourage the department from asking him for an injunction. He said such a request would be "manifestly unjust" because it would have the effect of killing the acquisition, since AT&T and Time Warner's agreement expires on June 21.

"I hope and trust that the government will have the good judgment, the wisdom, and the courage to avoid such a manifest injustice," he said in court. "To do otherwise, I fear, would undermine the faith in our system of justice of not only the defendants but their millions of shareholders and the business community at large."

The government's attorneys could go to the D.C. Circuit Court of Appeals to request an injunction.

"If I were the government and I wanted to pursue an injunction I think I would go straight to court of appeals," said Jonathan Pitt, co-chair of Williams & Connolly LLP's antitrust practice group.

Another option for the government is to skip a stay, and just appeal the case. But AT&T and Time Warner have said they will begin to merge the companies as soon as possible. A ruling from an appeals court would arrive after the deal is completed, making it difficult to untangle the newly merged company.

"The reason you'd get a stay is because the process of an appeals process can takes six months to a year," said Jeffrey Blumenfeld, a former senior Justice Department antitrust attorney who is now a partner at the law firm Lowenstein Sandler. "The risk in a merger situation is once the companies combine operations it can be difficult to take the company apart again, though it has been done."

If the court of appeals agrees to hear the case, a panel of three judges would only consider the evidence presented in trial. If the Justice Department loses there, they could attempt to take it up with the Supreme Court. It would be a notable moment if the high court's justices decide to take the case, since the Supreme Court has not taken up a merger case since the 1970s.

The Justice Department has other options, Pitt said.