What's in the House Republican tax bill for businesses 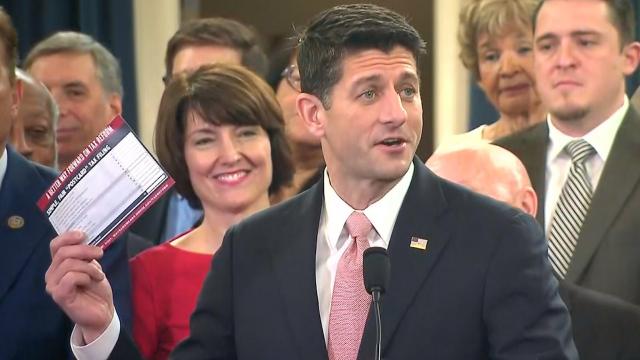 NEW YORK (CNNMoney) — The House Republican tax bill would give U.S. businesses much of what they've wanted for years, such as a lower tax rate and more generous expensing rules.

But it also includes a few provisions that might take big multinational corporations by surprise -- and not in a good way, said Martin Sullivan, chief economist at Tax Analysts.

That's because the measures that apply to foreign business income would actually cost multinationals $285 billion more over a decade than they would otherwise pay, the Joint Committee on Taxation estimates.

Other U.S. businesses, which are not taxed under the corporate code, would be subject to a host of other changes, including a much lower top rate that would benefit the most profitable ones.

Here are the key elements of the plan for companies of all stripes:

Lower corporate tax rate: The bill would permanently cut the corporate rate to 20% from 35%. The JCT estimates that would cost the government $1.5 trillion in revenue over a decade.

Republicans argue that corporate tax cuts are good for the middle class because they will increase investment, jobs and wages. The White House even asserts that a corporate tax cut will result in at least a $4,000 boost in annual income for households.

But a lot of economists push back on the idea that the middle class will see a big raise soon, if at all.

Territorial tax system: The United States has a worldwide tax system. That means American companies owe U.S. tax on all their profits, regardless of where those profits are earned.

Many argue that puts American businesses at a disadvantage to foreign competitors. That's because most of the competitors come from countries with territorial tax systems, meaning they don't owe tax to their own governments on income they make offshore.

The House GOP bill would switch corporate taxation to a territorial system. That way, American companies would owe U.S. tax only on what they earn here. Their offshore profits would be subject to whatever tax is imposed by the country where the money is made.

"Now you'd just pay the local rate and bring it back to the U.S. without any additional taxes," said Gavin Ekins, a research economist at the Tax Foundation.

Rules to prevent gaming the system: Under a territorial system, companies may be tempted to shift a lot of their profits to tax havens -- especially for products that were mostly developed stateside -- and then bring the money back to the United States tax-free.

To dissuade companies from dodging their U.S. tax obligations, the House GOP bill imposes what is effectively a 10% U.S. tax on a portion of their foreign subsidiaries' income if those subsidiaries book profits that exceed a certain threshold.

New excise tax: U.S. multinationals would be subject to a new 20% excise tax on payments they make to their foreign subsidiaries. The JCT estimates this provision alone would raise $155 billion over 10 years.

Tax existing overseas profits: The House bill would impose a one-time rate of 12% on existing foreign profits if they're being held offshore in cash or cash equivalents. Foreign profits that are invested in noncash assets offshore would be taxed at 5%. Companies would have up to eight years to pay what they owe.

The idea is to raise revenue from income that has so far escaped U.S. taxation. Under current law, companies pay U.S. tax only when they bring the money home.

But it's also meant to entice companies to invest some of the foreign profits stateside.

Faster investment write-offs: The House bill would let business immediately and fully expense most new capital investments, the money they spend building plants and upgrading equipment. But the provision would end after five years.

Even more than a lower tax rate, immediate expensing could offer a big break to companies that are just getting started or trying to grow.

Most U.S. businesses, large and small, are set up as pass-throughs, not corporations. They run the gamut from mom-and-pop shops to big law firms and investment partnerships.

They're called pass-throughs because the profits are passed through to the owners, shareholders and partners, who pay tax on them through their personal returns.

The vast majority of small businesses don't even make enough money to get into the 25% bracket. So the steep drop in the top rate disproportionately benefits the wealthiest owners, shareholders and partners in pass-throughs. That includes those in investment funds and other entities that don't necessarily create jobs.

The National Federation of Independent Businesses has already said can't support the House GOP bill as is, saying it "leaves too many small businesses behind."

Anti-abuse rule for pass-throughs: If the owners and partners in a pass-through also work for the business and draw a salary, that money is taxed at ordinary income tax rates, up to 39.6%.

To prevent people from converting their wage income into profits just to get the lower 25% rate, the House bill says that, for tax purposes, only 30% of a pass-through's income would be treated as profits. The rest would be treated as wage income and other compensation. Businesses, however, would be allowed to make their case that the 70/30 split isn't appropriate for their company.

Tax policy experts haven't weighed in yet on this anti-abuse provision. But their general concern is that when there's a large gap between ordinary income tax rates and pass-through rates, rules to prevent abuse are hard to make airtight, and even harder to enforce.

They point to Kansas, which eliminated the tax on pass-throughs altogether in 2012 while continuing to tax wage income. State revenue fell sharply as far more filers than expected reported pass-through income. The state recently raised its taxes and ended the pass-through carve-out.