What's ahead for the investigation into Jan. 6 attack? 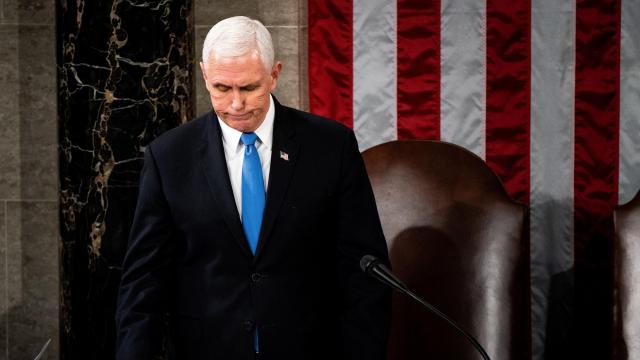 The anniversary of the Jan. 6 attack on the Capitol is shaping up as another split-screen episode, a day when Americans can tune in to two mutually exclusive versions of what happened that day, and more importantly, what it means.

They can watch President Joe Biden and Vice President Kamala Harris speak from Statuary Hall to mark what the White House has called "one of the darkest days in our democracy."

Or they can follow the lead of former President Donald Trump, who continues to characterize the day’s events as a "completely unarmed protest of the rigged election."

The reality? For nearly five hours, motivated by Trump’s baseless claim, his supporters beat police officers and sprayed them with chemical irritants, smashed windows, infiltrated the House speaker’s office and the Senate floor, and disrupted the normally mundane task of certifying the presidential election results.

But as the House committee investigating the riot expands its efforts, more is becoming known about what was taking place elsewhere, behind closed doors, off camera, in hotel suites and the Oval Office, in legal memos and text messages — and how close the United States came to its first political coup.

To emphasize the scale and seriousness of just what took place on the Capitol grounds, the Justice Department released a prosecution summary pegged to the anniversary, highlighting that it has charged 75 people with using a deadly or dangerous weapon or causing serious bodily injury to an officer. Over 725 people have been arrested, on charges ranging from minor misdemeanors to violent felonies.

Even so, many Republicans and right-wing media figures continue to indulge the lie that it was no big deal. Republican leaders condemn the violence that day, but they aim to draw a tight circle around what lessons should come of it. House Republican leader Rep. Kevin McCarthy, R- Calif., said in September, "There should only be two questions about this. Why were we so ill-prepared that day and what are we doing to correct it?"

Meanwhile the same myth that inspired the riot has served as pretext for big states such as Texas, Florida and Georgia to enact laws that undermine equal voting access or threaten the impartiality of election oversight.

"The attacks on our democracy have not ceased," said Senate Majority Leader Sen. Chuck Schumer, D-N.Y. "In fact, they have only accelerated."

And so, one year later, Democrats in Congress find themselves struggling to ensure that the full significance of Jan. 6 isn’t lost. Their game plan for the weeks ahead depends on making clear the gravity of the threat posed by the rioters and their sympathizers, while trying to restore Americans’ trust in the machinery of democracy.

The effort involves a mix of investigations, hearings and legislation. But with a midterm election just 10 months away and Trump already mobilizing for a potential 2024 return, they have little time to spare.

Rejecting the myth of a stolen election

Despite ample evidence to contradict him, Trump continues to press the case that Biden’s 7 million-vote election win was a fraud, the "crime of the century." It’s the falsehood that was behind the Capitol attack, and a year later, two-thirds of Republicans still believe it. That complicates Democrats’ effort to focus Americans’ attention on the real vulnerabilities of the election system.

So in hearings later this year, the House Jan. 6 committee plans to push back against the claim of massive voter fraud or altered vote counts. Chairman Rep. Bennie Thompson, D-Miss., told PolitiFact that the committee will bring in election officials from Republican-run states to clarify how "those votes that were cast were cast legally and consistent" with the requirements of state law.

PolitiFact's Lie of the Year: Falsehoods about the Jan. 6 Capitol attack

Thompson has said they will call on these officials to explain the multiple controls states and localities use to verify each voter and guarantee the accuracy of the vote tally.

Officials in key states have described the demands they faced from Trump and his allies to change the results that they had certified as accurate.

The battle over state election laws

Congress’ effort to restore faith in election administration must go up against state-level actions restricting voting in ways that have a notably partisan bent.

In PolitiFact’s review of state election laws, we found that 11 states had made changes since the 2020 election that restricted voting access to one degree or another. Some of these were made possible by a 2013 Supreme Court ruling that freed states with a history of voter discrimination from a federal review of their voting laws.

In Georgia, voters applying for absentee ballots must provide the number of their Georgia driver's license, state ID or another form of identification. The Atlanta Journal-Constitution found that about 56% of voters who lack a driver’s license or state ID are Black, and most live in large, urban, Democratic-leaning counties. State lawmakers also limited the number of ballot drop boxes and when voters can use them.

"It is hard to understand some of this new state authority over local election administration as anything but an attempt to put in place those who would manipulate election outcomes or at the very least seek to suppress the vote in heavily Democratic areas," Hasen wrote in a forthcoming Harvard Law Review Forum article.

Republicans have dismissed that characterization.

The Constitution gives states broad control over how they run elections, but it also leaves room for congressional oversight. So in a letter to his caucus this week, Schumer laid out plans to use the Jan. 6 attack as the springboard for passage of federal voting reforms.

Senate Democrats have two key bills on their agenda. The more narrow one, the John Lewis Voting Rights Act, would, in addition to other changes, bring back Justice Department oversight of laws and redistricting in states with a history of racially discriminatory voting rules.

There’s also the more far reaching Freedom to Vote Act, which sets national standards for ease of voting and nonpartisan management of the entire voting process, from casting ballots to verifying the count.

"The act does a pretty good job of covering the waterfront of voter suppression," said Sean Morales-Doyle, acting director of voting rights work at the left-leaning Brennan Center for Justice at New York University. "It addresses state rules for mail-in and early voting and registration that make it harder for certain people to vote. And it sets the ground rules for what votes must be counted, which will blunt efforts by states to give partisan actors undue influence over the counting and canvassing of ballots."

Both bills have broad Democratic support, but in the face of Republican opposition, neither has any chance of passage so long as the Senate filibuster rule and its 60-vote requirement remains in force.

Democrats aren’t giving up, though. Schumer said that by Jan. 17, Martin Luther King Day, there will be a vote to set aside the filibuster on this issue alone.

Fixing how Congress certifies the vote

Another legislative agenda item is fixing the way election results are certified.

Trump and his allies were able to exploit the unusually slow vote-counting efforts in many battleground states to sow their conspiracy theories and doubts about the 2020 election. They were counting on their reading of a century-old law to parlay those doubts into a last-minute parliamentary maneuver on Jan. 6 that would overturn Biden’s victory.

Trump and his allies interpreted the law to mean that Vice President Mike Pence had the power to reject results from just enough states to throw the final tally into question. They got enough Republican lawmakers to challenge the results on Jan. 6. All they needed was for Pence to go along. He didn’t.

To legal scholar and Republican Party lawyer Benjamin Ginsberg, the close call was evidence that the Electoral Count Act is too poorly written to help the country weather a constitutional crisis.

Ginsberg and other scholars say that the law fails to say who at the state level — the governor or the secretary of state — has final say over the slate of electors. It is vague about the role of the vice president, and the grounds for challenging slates sent from any given state. Above all, it fails to set clear limits on Congress’ power to reject the results certified by each state.

"If there’s people that know the technicality of this (law) and know how to win against the will of the people, something is wrong that we have to change," Rep. Adam Kinzinger, D-Ill., one of two Republicans on the House select committee, said Dec. 19 on ABC’s "This Week."

Top Senate Republicans have said they’re interested in tightening the law, and Ginsberg argued that it’s in Republicans’ interest to do so, since the current vice president is a Democrat.

"What Trump and Republicans should realize is that those ambiguities can also come back to be used against them," Ginsberg said, adding: "A solid set of ground rules is better for everyone."

Revealing the scope of the effort to undermine the 2020 election

Even as Congress looks ahead to 2024, there are still many unanswered questions about the lead-up to those pivotal hours on Jan. 6, 2021.

One year and 300 depositions later, the House committee investigating the riots is signaling where its inquiry might lead. It has gathered records and testimony that begin to flesh out who said what to whom among White House staff, members of Congress, cheerleaders for unrest such as former presidential adviser Steve Bannon, and the financiers of the campaign to subvert the election results.

The committee must work quickly. If Republicans win control of the House, they could disband the committee or steer it in another direction.

Bannon and other Trump allies have rebuffed subpoenas or otherwise declined to cooperate with the probe. But the committee’s marquee struggle lies with Trump, who is fighting to prevent the committee from seeing White House records held in the National Archives. An appellate court ruled against Trump, and the final call falls to the Supreme Court.

The appellate court ruling describes hundreds of pages of daily presidential diaries, visitor logs, and call logs. There are three handwritten notes from former Chief of Staff Mark Meadows, plus Meadows’ files listing scheduled or potential briefings and phone calls about the certification on Jan. 6 and other election issues.

Trump’s delay in calling for his supporters to back down has emerged as a key focus.

"We know as he was sitting there in the dining room next to the Oval Office, members of his staff were pleading with him to go on television, to tell people to stop," committee vice chair Rep. Liz Cheney, R-Wyo., told ABC News Jan. 2.

The delay matters because Cheney has suggested that it could be grounds for criminal charges.

"Did Donald Trump, through action or inaction, corruptly seek to obstruct or impede Congress’s official proceeding to count electoral votes?" Cheney posed at a Dec. 14 hearing.

Cheney’s choice of words matters, because in a case against one of the Jan. 6 protesters, a federal judge ruled that interrupting the count could be a crime. (Trump was already impeached over the riot on charges of incitement of insurrection, but was acquitted in the Senate after he left office.)

Thompson, the committee chairman, declined to say if charges were in the forecast, but in an ABC News interview, he said, "If we find something that is irregular or illegal, we’re obligated to report it."