Think of 'Deez Nuts' as a protest vote

Raleigh, N.C. — You might have heard "Deez Nuts" is running for president, and he’s polling surprisingly in Public Policy Polling's latest North Carolina survey. According to PPP, 9 percent of voters in North Carolina say they would vote for him. PPP finds similar levels of support in other states that have included him as an option.

Who is Deez Nuts? He’s actually the pseudonym of Brady Olson, a 15-year-old from Iowa. Rolling Stone profiled him. So too have others, including the high-profile blog, "Vox."

Is Deez Nuts going to win?

No, of course not! And 9 percent of North Carolinians would not actually vote for him.

In 2014, when Libertarian U.S. Senate candidate Sean Haugh was polling in the low double-digits, I wrote on this blog that he wouldn't garner anywhere near that percentage of actual votes, and I was right. In the end, Haugh captured less than 4 percent of the vote.

Deez Nuts is polling well for a somewhat different reason. As I argued about Haugh’s polling, and others have explained about Deez Nuts, respondents will often signal their discontent by picking third-party candidates in pre-election polls. Think of Deez Nuts as a costless "protest vote." On Election Day, though, partisans behave like partisans, and they vote for a Democrat or a Republican, not a Libertarian like Haugh nor a joke like Deez Nuts.

This is why polling about a presidential contest over a year ahead of time is a bad idea. 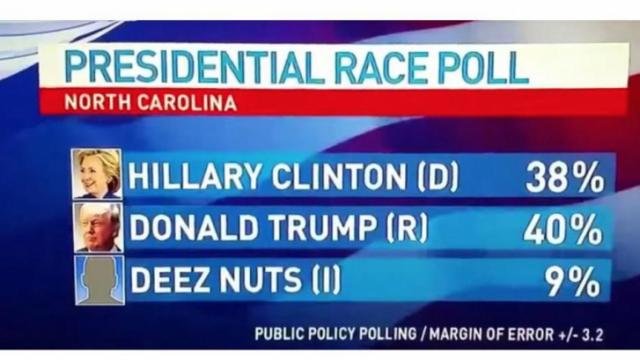 Unlike Haugh, however, I believe Deez Nuts wouldn’t have approached 9 percent in just any poll. Public Policy Polling is the only company that asks about Deez Nuts, and this matters. PPP uses interactive voice recording, IVR, to conduct its polls. IVR is a method where survey questions are pre-recorded, computers call thousands of phone numbers until someone picks up, and respondents answer questions by pushing buttons on their phone.

The crucial point is that respondents in IVR polls don’t interact with another human. That makes it a lot easier for respondents to give silly answers, ones they wouldn’t dare provide in a face-to-face setting or to another person over the phone.

Imagine being asked by a stranger if you plan to vote for Hillary Clinton, Donald Trump or Deez Nuts. Would you really say Deez Nuts? I’m guessing, probably not. Now, picture yourself listening to an automated question about an election you haven’t thought much about and you can vote for Deez Nuts just by hitting button "3" on your phone. There is no social penalty pushing that button on your phone, no scorn, nobody to answer to and nothing to be embarrassed about.

Although administering polls using IVR make it possible to poll cheaply and maybe contact people who are otherwise hard to reach, they also encourage respondents to answer insincerely.

Of course, this bizarre polling result happened only because PPP included Deez Nuts as an option instead of just asking respondents if they lacked an opinion. Asking about joke candidates, however, is more likely to risk further eroding public confidence in surveys rather than validly exposing our discontent with the current crop of politicians.