EMILY BADGER: What if everyone voted? 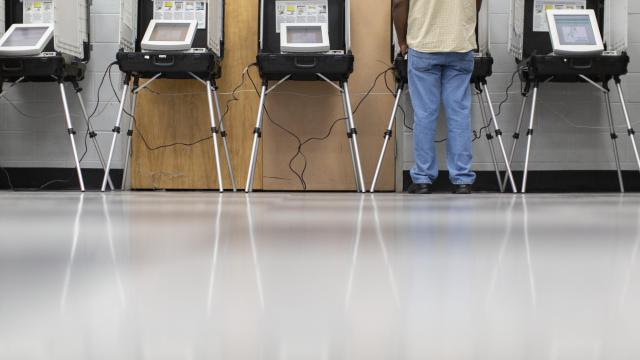 In Hawaii, Illinois and Vermont, voters who have not registered yet will be able to on Election Day, right before they cast a ballot. In Indiana, Mississippi and Georgia, the registration deadline is now weeks past and registered voters who turn up will have to show a photo ID.

Their states, and many others, have been moving over the past decade in starkly different directions. Some, predominantly blue, have expanded early voting, or made registration simpler or even automatic, in a bid to make voting as painless as possible. Other states, mostly red, have curtailed the election calendar or adopted strict ID laws that can have the opposite effect.

As a result, voters’ experiences in the same national election will vary significantly by state, to a greater degree than has been true in decades. Underlying that reality is an increasingly partisan split over whether it should be a goal at all in the United States to get more people to vote.

Many political scientists say that policies that make voting easier would also make American democracy more representative and less likely to favor the interests of wealthier, older and white voters who typically turn out at higher rates. Broader participation, proponents say, could ease polarization, lift faith in government and dampen criticism that politicians representing the views of a minority of Americans wield the majority of power in Washington.

“Equalizing turnout across the population would be the single best thing we could do for our democracy and probably for our country in the near term,” said Adam Bonica, a political scientist at Stanford.

Others are not convinced it is a problem that the voting population does not resemble the American population. Some groups just are not that interested, they say. Trying to coax them to participate — tailoring our laws to “political couch potatoes,” as Mitch McConnell, R-Ky., the Senate majority leader, once put it — would lead only to bloated voter rolls, likelier vote fraud and a more uninformed government, they warn.

“The assumption with these proposals is that it would be normatively better if more people voted,” John Samples, a vice president at the libertarian Cato Institute, said in an email. “But would it be better?”

‘If Everybody Voted, Clinton Wins’

Any debate over electoral changes — automatic voter registration, Election Day registration, a voting national holiday — is complicated by the politics of this particular moment. For now, at least, it seems likely that expanding easy access to voting would benefit Democrats.

Even a decade ago, this was not conventional wisdom. As recently as 2000, young voters were no more likely to vote Democratic than the general voting population. Now there is a wide generation gap in party preferences, and Hispanics and Asian-Americans, who are less likely to vote, lean more heavily Democratic.

It is impossible to know what would have happened had the people sitting out elections voted. But Bernard Fraga, an Indiana University political scientist, has tried to gauge that alternative reality using data from the Cooperative Congressional Election Study, which annually surveys thousands of Americans.

The survey asks which candidates people preferred even if they did not vote. And if we add their preferences to the voting population in the last several elections, we get different election results.

“If everybody voted, Clinton wins. If minority turnout was equal to white turnout, Clinton wins,” said Fraga, who describes these patterns in a newbook, “The Turnout Gap.” Many white voters who preferred Trump sat out 2016 as well. So in this full-turnout counterfactual, Clinton does not overcome Trump’s narrow victories in Wisconsin, Michigan or Pennsylvania. Rather, she flips Florida, North Carolina and Texas.

The preferences of the population are aligned with a Democratic majority in the Senate as well, Fraga said, despite the bias toward rural states. We do not see that, he argued, because of disparities in turnout.

For Democrats who have lamented the non-majoritarian outcomes of the Electoral College or the Senate, this suggests that policies expanding access to voting — ideas far less drastic than the compulsory voting that is used in Australia and some other nations — might make those institutions more representative.

In any of these situations, we would expect politicians and the parties to adapt. So shifts in turnout would not guarantee stable Democratic advantages. But that is precisely the point.

“Parties do what it takes to win,” Fraga said. If young people voted at higher rates, politicians would cater to them. “If Latino turnout in Texas was as high as white turnout in Texas, I think the campaign strategies of both Ted Cruz and Beto O’Rourke would be quite different.” Any talk of ideas like automatic voter registration, however, will run into today’s politics.

“Right now, is there some huge Republican support for it? No, there’s not,” said Sen. Amy Klobuchar, D-Minn., who has introduced legislation that would require states to adopt automatic registration. “But if you start making the case that this would be an easier way to guarantee the freedom to vote, I think you could make some headway.”

A debate around that idea would differ from discussion in the early 1990s, when Congress considered the Motor Voter law that required states to offer registration at departments of motor vehicles and public assistance offices. George H.W. Bush vetoed a version of it, saying it would impose costly regulation on the states, before Bill Clinton signed it into law. At the time, the partisan implications were murkier.

“Back in the Motor Voter days, people would say with a straight face, ‘It’s not clear who this will help; we just think we should make it easier for people to vote, that would be good,'” said Jonathan Nagler, a professor of politics at New York University. “Those days are gone.”

What has changed since then is not just the nation’s demographics, nor the political leanings of particular groups.

“Sadly, I think the Bush v. Gore decision back in 2000 was the big bang that began this process,” said Barry Burden, who directs the Elections Research Center at the University of Wisconsin. “The Florida debacle just spotlighted how seemingly small things like the design of the ballot, or the kind of machine that’s used, or who’s in charge of administering elections can be quite consequential.”

No state offered elections entirely by mail before 2000. None had a strict voter ID law. Early voting was rare.

Then the states began to diverge. Today, Democrats are much more likely to believe that eligible voters are prevented from voting and Republicans that ineligible voters are getting into the system. (There is no evidence of consequential voter fraud.)

In a 2017 Pew survey, 63 percent of Republicans said citizens should have to prove they want to vote by registering ahead of time, while just 35 percent agreed that everything possible should be done to make voting easy. The responses flip for Democrats: 84 percent said we should make it easy, and 15 percent said people should prove their interest. And blacks are far more likely than whites to say voting should be made easier.

In effect, many Americans say that it should not be easy to vote, although it is hard to untangle whether that is a philosophical belief or a tribal position likely to change the moment voting coalitions do.

Bryan Caplan, an economist at George Mason University, argues that the larger problem is that if more people voted, we would simply have more uninformed voters and more populism.

“One of the main reasons why politicians are populists is that populist positions appeal to people who participate but don’t know very much,” Caplan said. With lower turnout, he said, “Either Trump wouldn’t have won, or Trump would be a different man, if you can imagine that.” It is not clear, though, that indifference or ignorance is primarily what is holding back people from voting. Hourly workers, who vote at lower rates than professionals, may not have paid time off to vote. Minorities, who vote at lower rates than whites, have historically been the target of voter suppression laws. Structural barriers to voting and attitudes toward it are closely related.

In trying to separate them, we talk about voting in ways that seldom apply to other rights.