What if CHIP Funds Run Out? Here’s What 6 Families Would Do 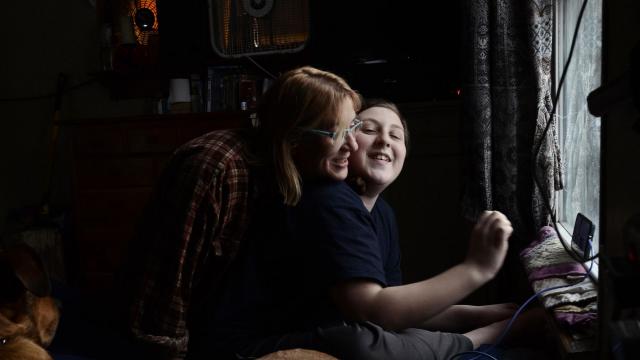 The Children’s Health Insurance Program, better known as CHIP, covers nearly 9 million children whose parents earn too much for Medicaid, but not enough to afford other coverage. But the program, which ran out of funding in September, is at a crisis point. Congress passed a stopgap spending bill late last month that was expected to keep CHIP running through March, but the Centers for Medicare and Medicaid Services said some states could run out of money as early as next week. We asked readers to tell us how they would be affected if their children lost CHIP coverage. Their stories have been condensed and edited for clarity.

“It’s a recipe for a sick society, literally.”

Rebecca Ribiero, 45, a hospital social worker of Newfield, New York. Her husband, Alexandre, 42, is an assistant manager at Cornell University. CHIP covers their son, Max, 12, who has a learning disorder.

I worry about what will happen to my kids, and to my husband and me, in the future if CHIP were to go the way of the dinosaur. My husband and I would have to evaluate which of our employers would offer the best deal. We’re lucky that’s even an option to consider, but insurance through my employer would still be $200 per month, as opposed to the $45 we pay now. We would have to cut back even more, and honestly, find out where to cut. We keep a pretty tight budget and we live simply. We don’t have cable. I shop at thrift stores for myself so I can afford a car that works.

Max has a learning disorder; his school has done testing and they’re able to get some reimbursement through CHIP, and I’m not sure if that would be true through my employer’s insurance. It’s hard enough for a small school that doesn’t have a lot of money; testing is very expensive and it took them years to do so, in part because of financial concerns. The Individualized Education Plan, or IEP, has been very, very supportive. If CHIP folds, what happens to my son, to the school district and to the other kids relying on state-subsidized insurance?

“I have no idea what waits for us this year.”

I use CHIP for things like routine visits and immunization. My two stepsons have other issues: They see allergists, optometrists, and perhaps most important, my youngest stepson has had febrile seizures since he was a child. Doctors say it’s harmless, even though it’s terrifying, and most kids grow out of it, but my stepson has not. CHIP covered his visits to neurologists, additional electroencephalogram testing, a metabolic specialist and now covers a low-dose medication to ensure that he doesn’t get seizures. None of that would be in anyone’s financial reach without borrowing egregious amounts of money; it’s that kind of thing we can do with peace of mind. It allows him to have a higher quality of life, less-stress childhood that every kid deserves regardless of a family’s economic situation.

“It’s one of the few political topics I will talk about.”

Sarah Mullen Rua, 37, harpist of Bastrop, Texas. Her husband, Cyrus, 44, was laid off after eight years with a touring band. CHIP covers their daughter, Eleanor, 4.

We’re lucky, we’ve had an incredibly healthy child, so for the most part, it’s been preventative care. But I’m pushing to get everything done as fast as we can just in case CHIP is no longer funded or the ACA goes back on the cutting board this coming year. I had the option at our last checkup to get all of her shots then and I opted to do all of them in December, just in case.

I’m not sure how we’d even go about getting a job with employer-provided health insurance if CHIP did disappear; they seem few and far between. I’m the only one with a college degree, so that would be up to me if we did. I don’t know about any jobs that would get us insurance without one of us going back to school, which has been discussed, but now that my husband doesn’t have his touring gig, my income is nearly our entire income.

I spent a lot of time learning the system and the ins and outs the best I can, helping friends in this situation and advocating for the plans when I can. It’s one of the few political topics I will talk about.

Kati Brown, 32, a self-employed crochet designer and freelance writer, of Greeley, Colorado. Her husband, Chase, 32, is an IT support specialist. CHIP covers their two sons, Myles, 6, and Corbin, 9, who has anxiety and attention deficit hyperactivity disorder, ADHD.

The thing that I’m most terrified about is mental health care coverage.

Behavioral health requires constant maintenance and therapy, which CHIP is willing to provide, but most insurance carriers cut in half, or worse. The one I was looking at limits Myles’ speech therapy to 20 sessions a year, which isn’t even one a week. They also limit specialist visits to two per year. Any more and we have to pay 100 percent before deductible, which would include any psychiatrist. Also, a lot of mental health drugs are an “upper tier” product with a lot of insurance carriers, meaning that they cost significantly more than the average prescriptions, even the generic ones.

We’re incredibly lucky because there are a lot of people that can’t go get new coverage because there’s nothing else available. For us, it might mean I go work outside the home, it might mean shopping for my kids on the Affordable Care Act marketplace, or that we pull together the funds month-to-month to pay out of pocket for the specialists that we’re not allowed to see on insurance. We would need to tighten our belt more. Our entire continuity of care would get disrupted because we would no longer have access to middle-of-the-day appointments or the ability to talk to the school when needed, which is why I started working from home, for availability.

It’s scary, I don’t know a single person in my circle of this little world under the age of 35 whose kids are not on CHIP right now. The saying “it takes a village to raise a family” doesn’t exist anymore, at least from the government’s perspective. Now the angle is they’re your kids, you deal with it. If we don’t get rid of that mentality, nobody from this generation will have kids.

“As a Dreamer, I get nervous if I ask for too much help.”

I’m very blessed that they’re very healthy. I’ve used CHIP mainly for checkups. This past month has been rough for us, they got a stomach bug and we had to go back and forth to the doctor. But it worries me more so than for the other people that struggle more than I do. Like people who have kids who are actually sick — it’s a lot for them.

I have insurance for myself through my job, but not for them because if I put them in the insurance, it’s very expensive. As a Dreamer, I get nervous if I ask for too much help or a lot of help, maybe it’s wrong for me to think that way but I don’t want to ask for too much. If I have to pay, I just prefer to pay than ask for help. It’s just me in the house, no husband, I do everything on my own; I also drive Uber during the weekends just to get more money; it’s hard.

For the past two years we have CHIP, before we had Medicaid because I was making less money while working in car sales. But I don’t think it’s crazy what we pay on CHIP, I think it’s fair enough. The only difference is the copays and sometimes medication is not covered and you have to pay out of pocket, but you’ve got to do what you’ve got to do.

“You have to have insulin to live. Without it, my daughter would slowly starve to death.”

Heidi Sanchez, founder of a startup, of Weslaco, Texas. CHIP covers her daughter, 14, who has Type 1 diabetes.

I rely on programs like CHIP to help out with the cost of diabetes, a monthly cost that is more or less $1,200. That’s a significant cost and they say they are going to fund it through March, but what about after March? My daughter is the type that would worry and so she knows that her medication costs a lot, but I haven’t told her how much it costs.

I’ve been very involved with calling my congressmen; I’ve got John Cornyn and Ted Cruz in the Senate and they get an earful out of me. Frankly to me, it’s just appalling that in America we can’t even cover kids. You can be at risk of dying, because you don’t have health coverage because you can’t afford it. You have to have the insulin to live. Without the insulin, my daughter would slowly starve to death.