What Happens When Politicians Who Oversee Elections Are Also the Candidates? 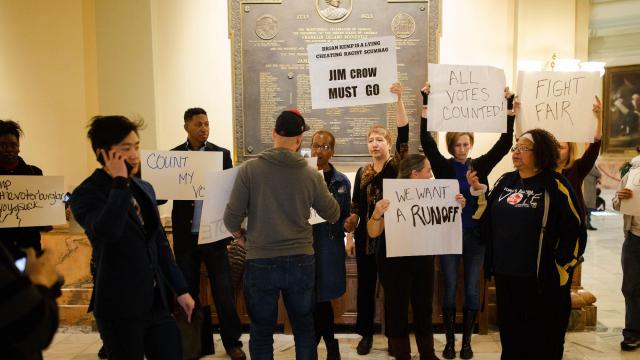 MIAMI — It was only a week ago that Rick Scott, the Republican governor of Florida and candidate for the United States Senate, claimed on television that “rampant fraud” was perhaps imperiling his election to Congress, and that he was asking the state Department of Law Enforcement to investigate.

Earlier in the day, at the Georgia State Capitol, Secretary of State Brian Kemp defended his decision to oversee an acrimonious election in which he was a candidate for governor and, by his own preliminary assessment, a victorious one.

The elections in the Southeast’s two most populous states remained undecided Wednesday, more than a week after the balloting, embroiled in lawsuits and accusations. Much of the turmoil is attributable to the high-profile political prizes at stake. But some can be traced to decisions by Scott and Kemp to mix, by design or duty, their public roles with their political lives.

Choices by the two powerful Republicans to oversee elections in which they had overwhelming personal interests prompted bipartisan misgivings, fueled some of the sparring that has spilled into the courts and intensified the most stinging criticisms of their campaigns. Their approaches to navigating the thicket of runoffs and recounts, litigation and delayed certifications, show that there is no set playbook for candidates whose political fates are up for grabs.

“The worst thing you can do is try to force a resolution politically rather than electorally,” said Adam Goodman, a Republican political consultant who advised then-Secretary of State Katherine Harris during the Florida presidential recount in 2000. “Those who are throwing politicized brickbats into the process are doing it — and every voter — a disservice.”

By the time Kemp, Scott and their states entered the messy aftermath of Election Day, both men had been at the centers of two of the year’s most expensive and acrimonious campaigns. In Georgia, Kemp sought to extend the Republican Party’s 16-year grip on power by defeating Stacey Abrams, his Democratic rival who was running to become the first black woman to be elected governor of any state.

In Florida, where Scott’s eight years in power were rapidly drawing to a close, the governor mounted a vigorous campaign to unseat Sen. Bill Nelson, a Democrat and a wily survivor of his state’s unpredictable political landscape.

Scott and Kemp have insisted they have taken strong lines to assure the lawful conduct of elections in their state not as politicians, but in their roles as elected officials. “Our campaign has filed lawsuits to make sure that Florida law (which is designed to protect against fraud) is followed,” a spokesman for Scott’s campaign, Chris Hartline, said in a statement.

Kemp went so far as to resign as secretary of state — but only after the election, when he believed he had all-but-secured the governorship.

The race for governor in Florida was bitter from the beginning, but it was not until last Thursday, with his lead over Nelson dwindling, that Scott adopted a tone that began raising alarm bells in Democratic circles. After months of campaigning in relatively measured tones, he leveled a series of accusations that implied his opponents had been engaged in fraudulent manipulation of the results.

“Every day since the election, the left-wing activists in Broward County have been coming up with more and more ballots out of nowhere,” he said, without providing any evidence. “We all know what is going on. Every person in Florida knows exactly what is happening.”

But what raised the most objections from Scott’s critics was his request two days after the election for the Florida Department of Law Enforcement to investigate elections supervisors in Broward and Palm Beach counties, both elected Democrats. He did not instruct the department to act — he was speaking as a candidate, not as governor, and the department does not report to him alone — but the request brought strong criticism from Democrats, who accused Scott of attempting to improperly interfere with the conduct of the vote-count.

“He’s now taking a page from the playbook of the secretary of state of Georgia in an attempt to influence his own election,” Commissioner Steve Geller of Broward County, a Democrat, said in a reference to Kemp. “When you’re the governor of the state and you say without evidence that there’s fraud and you demand that the state agency investigate, it’s just way out of bounds.”

The department declined to investigate immediately because no specific instance of possible fraud had been submitted, but said it would look into it if that changed.

More controversy arose when the Department of State revealed late Tuesday that it had asked federal prosecutors during election week to investigate whether the Florida Democratic Party had broken the law by sending voters — apparently most of them Democrats — incorrect information about how long they would have to resolve invalidated signatures on their mailed-in ballots.

In any case, by Wednesday, the governor was decidedly quieter. On a conference call with a federal judge, a lawyer for Scott said the governor had decided to recuse himself from the state canvassing board that is scheduled to certify the election results Tuesday. The League of Women Voters, which sued Scott to force him to step aside from any matters involving the recount, insisted it wanted a neutral outsider appointed instead.

In Georgia, meanwhile, controversy surrounded Kemp and his role in the election as gubernatorial candidate and secretary of state even before the polls opened.

Republicans had championed Kemp as an enforcer of Georgia elections procedures — he oversaw purges of the voting rolls and supported a tightening of registration rules — but Democrats argued that he was rigging the system to his and his party’s benefit.

“I certainly wasn’t going to run from my job of making Georgia the most secure, accessible, fair state in the country for elections, and we have done our part to make elections more accessible,” Kemp said last week. It was only then, once he was asserting himself as the governor-elect, that he announced his resignation. By then, Democrats had long leveled a barrage of criticism over his dual role. Their outrage has not abated.

“We believe that Brian Kemp mismanaged this election to sway it in his favor,” Abrams’ campaign manager, Lauren Groh-Wargo, said Wednesday. She described Kemp as “the secretary of suppression.”

Kemp’s campaign rejected any such assertion and said that Abrams would “stop at nothing to undermine democracy and attempt to steal this election.”

Kemp and Scott still hold narrow leads, but the controversy that has swirled in the aftermath of both elections highlights how little public consensus there is about what, or how much, a candidate who already holds public office should say when an election is in dispute. Many political strategists, indeed, have doubts about whether such public statements in the aftermath of voting are even useful.

Joseph I. Lieberman, the Democratic nominee for vice president in 2000, suggested that any public posturing by political campaigns had only limited influence.

“The most important decisions, I think, are the legal decisions,” Lieberman said. “I honestly don’t know what effect, if any, on the outcome of this recount that candidates speaking out will have, but it probably will affect the spirit of their supporters.”

Marc Racicot, who was the Republican governor of Montana who spoke frequently on behalf of the George W. Bush campaign during Florida’s notorious 2000 recount, said he urged candidates to remember that their words during election season would be remembered during their subsequent years as lawmakers.

“I’d try to advise all of them, Republican or Democrat, to stay focused on the kinds of things you want to exhibit if you’re ultimately chosen as the candidate to become the officeholder,” he said. “If everyone starts undermining confidence in government from the very beginning, it doesn’t serve us well in the short-run or the long-run.”