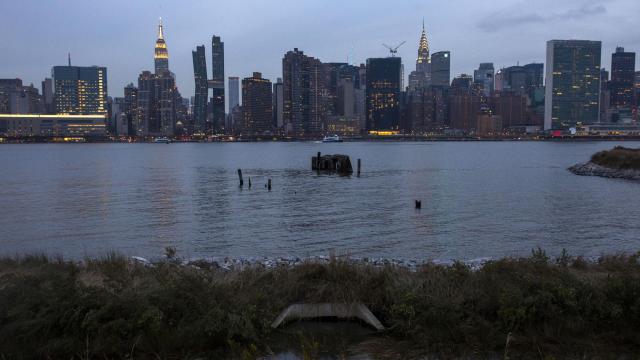 It might seem mundane, but what happens in the bathroom matters: New York, for all its modern conveniences, sits atop a century-old sewage system used by more people than ever before. Every time someone flushes, washes their hands or takes a shower, all that household wastewater (and worse) flows down into 7,500 miles of sewer pipes. Most of these pipes also do double duty, collecting rainwater runoff from rooftops as well as streets.

When these sewer pipes get clogged by humans — flushing baby wipes anyone? — or simply overloaded with rainwater, it becomes everyone’s problem. The “combined sewer overflows” are discharged directly into nearby rivers, bays and creeks instead of going to wastewater treatment plants. Raw sewage also backs up in homes, creating a stomach-turning mess.

Long Island City residents say these backups and overflows already happen whenever it rains hard — and 25,000 more Amazon workers will only make the problem worse. But city officials say they are ready to take on whatever comes down the pipes. Here is why.

A New Yorker typically uses 100 gallons of water per day, from showering and brushing teeth to washing dishes and clothes, according to the city. All that water goes into the sewer pipes.

By that math, 25,000 Amazon workers will produce 2.5 million gallons of wastewater per day. While that sounds like a lot, it is actually not by city standards.

Amazon’s wastewater will flow into pipes that are bigger than those found in most residential neighborhoods. Long Island City is a former industrial area, so its pipes once handled the output from factories and businesses.

These sewer pipes are also in relatively good shape, said Vincent Sapienza, commissioner of the city’s Department of Environmental Protection. The oldest pipes date to the 1900s, while others were added in the 1920s when construction was planned for the entrance to the Queens-Midtown Tunnel. The rest came decades later.

Citywide, the average age of a sewer line is about 80 years old.

“I would say Long Island City is middle-aged,” Sapienza said.

— Room at the Treatment Plant

Nearly all of Long Island City’s wastewater is whisked away to the Bowery Bay Wastewater Treatment Plant in Astoria, Queens, one of the city’s 14 sewage treatment plants.

“It’s not much. In the scheme of things, it’s not a big difference.”

— But What Happens When It Rains?

Heavy rains, however, can upend the city’s sewage calculations. In Long Island City, as in many other neighborhoods, sewer lines can fill up with so much rainwater runoff that there are combined sewer overflows.

“That’s the No. 1 water pollution problem in New York City,” said Eric A. Goldstein, a senior lawyer for the Natural Resources Defense Council, an advocacy group. “It happens every time it rains — whether Amazon gets built or not.”

But Amazon — or any large development — could exacerbate that existing wet weather pollution problem, Goldstein added.

A 2012 city rule requires new developments to take measures to retain significant amounts of rainwater on site, such as using green roofs and porous pavements. As a result, city officials said, Amazon’s new headquarters would be an improvement over older buildings — and could actually end up reducing rainwater runoff in the sewage system. City officials pointed to significant progress in reducing rainwater runoff — and the resulting overflows — across the city in recent decades. In fact, they like to say that New York waters have not been this clean since the Civil War.

Sapienza said his agency will be monitoring Amazon’s development to see if additional work is needed.

Even before the Amazon deal, the city’s Economic Development Corp. announced $95 million for water and sewer improvements in the neighborhood. Officials also pointed to years of city efforts to lay the groundwork for development in the neighborhood, including opening a new section of Hunters Point South Park along the East River in June that serves as a buffer against storm surges.

An Amazon official said the company has not yet begun to design its buildings and will address infrastructure needs during the environmental review process. In Seattle, where Amazon is based, its buildings have green roofs and low-flow fixtures in the restrooms, and capture rainwater to use to water the landscape.

— Don’t Flush When It Rains

Still, critics worry these efforts will not be enough, especially given all the other development in Long Island City. They also pointed out that climate change could bring more frequent and more severe storms — and more rainwater runoff.

City Councilman Jimmy Van Bramer, a Democrat who represents Long Island City, said sewer lines were built for fewer people, and have not kept up with the recent building boom. In many buildings, residents are asked not to flush during heavy rains, he said.

“This would turn a situation that is untenable into a crisis if Amazon is able to build all of this and bring in all of these people,” he said.

Mike Dulong, a senior attorney for Riverkeeper, an environmental group, said Amazon’s headquarters could undermine years of efforts to clean up local waters.

“That’s a lot of people,” Dulong said. “That’s a lot of toilets and showers and sinks and wastewater going into treatment plants that are already overwhelmed every time there’s a significant amount of rain.” — What Do Long Island City Residents Think?

Tom Paino, an architect and longtime resident, said that sewage problems have become a constant headache and “$95 million is not enough to even begin to cover what needs to be done.”

No matter how big the sewer pipes are, he said, “They are not big enough.”

As it is, sewage backs up in homes and businesses. Combined sewer overflows wash up along the waterfront and in parks where children play, residents said, and with rising sea levels could creep farther inland in coming years.

“It’s a health hazard,” said Ernie Brooks, a musician who lives near the Amazon site, who also complained of an odor from the overflows. “If you walk around Long Island City after a heavy rain, there’s a lot of standing water — often at least a foot near where I live.”

Sheila Lewandowski, executive director of a nonprofit theater, lives a block away from the East River. Whenever a deluge is possible, she scrambles around her basement getting everything off the floor — even propping chairs and tables on top of paint cans — in case the river rises high enough to flood her home.

“I don’t want to be cleaning the sewage off my furniture,” she said.

“If we don’t deal with the problems that currently exist in the sewage system, every new building exacerbates each of those problems.”