What Happens to a Hub of Renaissance Florence When the Friars Move Out? 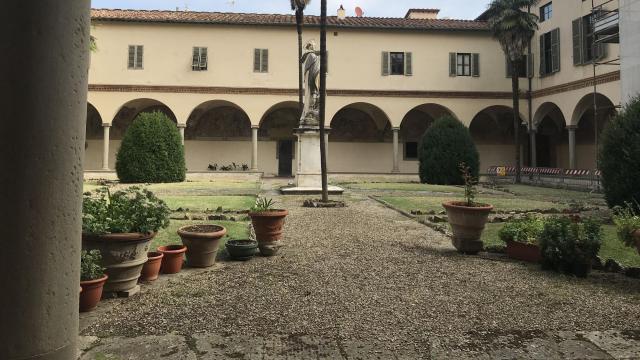 FLORENCE, Italy — For nearly 600 years, Dominican friars in Florence, Italy, have inhabited the Convent of San Marco, one of the city’s great spiritual and cultural hubs, renowned for its frescoes by Fra Angelico and once home to the fiery preacher Girolamo Savonarola.

But at the end of September, this storied occupation will end, a victim of the dwindling ranks of the Dominican order. The convent’s only remaining residents — four aging friars — have been told to pack their bags and move across town to the convent of Santa Maria Novella.

“The community of San Marco is no more, it is finished,” said the Rev. Fausto Sbaffoni, one of the four, who arrived here in 1979 and was present in June when the regional chief of the Dominicans arrived to read the order suppressing, or closing, the convent. “No friar can remain in a suppressed convent,” he noted.

The Roman Catholic Church is making similar difficult choices around the world, though rarely in a place with such a historical and artistic legacy. The church is struggling with a worsening shortage of clergy — what the Vatican calls the crisis in vocations — especially in Europe and North America.

Today, there are fewer than 10 Dominican friars living in Florence, split between the two convents, so in a general restructuring, the order decided to join them under one roof.

What will become of San Marco is unclear, and some friars there still hold out hope for some form of divine intervention. Perhaps with a bit of a terrestrial hand.

“If there is one man who can stop the convent from closing it is Pope Francis,” said Bash D’Abramo, the secretary of “Beato Angelico for the Renaissance,” a cultural association named for Fra Angelico that holds art exhibits and concerts at San Marco (and that sometimes showcases the talents of two of the friars, one of whom is a talented organist, the other a drummer).

For weeks, D’Abramo has been seeking an audience with the pope, to hand him a petition to keep the convent open. Among the 18,000 signatories are a host of intellectuals and Florentine bigwigs.

A recent attempt to deliver the signatures at the pope’s weekly Wednesday audience was stymied when D’Abramo’s tickets were switched at the last minute — somewhat suspiciously, he thought — so that he would not be close enough to Francis to speak with him. “We can hardly throw the petition at him, it’s not a fruit market,” he said, disconsolately.

The Dominicans took possession of the convent in 1437, when the architect Michelozzo began a vast reconstruction of an existing convent, at the expense of Cosimo de’ Medici, who reserved a cell for himself as a retreat. Between 1438 and 1443, the Dominican painter Fra Angelico painted a series of contemplative frescoes in the friar’s cells that are considered Renaissance masterpieces. In 1869, those cells and others areas of the complex were separated from the convent to become a national museum.

San Marco took center stage in 15th-century Florence when Savonarola started his reformist campaign. A plaque on one wall marks the spot where, on April 8, 1498, he was arrested by his opponents. A painting in the museum (which also houses his relics) depicts Savonarola’s execution later that month.

One cell in the convent is renowned as the home, from 1934 to his death in 1977, of Giorgio La Pira, twice mayor of Florence and a Dominican lay person. To the joy of Dominicans and many Florentines, Pope Francis conferred the title “venerable” on La Pira in July, a step on the path to sainthood.

“I think there is a strong contradiction here. How can you exalt La Pira and at the same time close the convent that was so fundamental to La Pira?” Sbaffoni asked.

Sbaffoni does not challenge the decision to downsize. He just wonders why San Marco, not Santa Maria Novella, has to shut its doors.

“San Marco should have been the last to close, because it’s by far the most important,” he said during a recent interview in the Arrigo Levasti Library of Spirituality, inside the convent, whose future is also risk. He fretted that once the convent was abandoned, it could quickly fall into disrepair.

“A bad hailstorm recently broke windows that we patched up. Imagine what would have happened if no one was here,” he said. “These are old structures.”

He also pointed out that the friars had more space at San Marco. “At least we have a cloister we can still stroll through,” he said. Santa Maria Novella’s cloisters are open to tourists.

The future of the convent — which is actually state property — is still uncertain. One idea is for the adjacent Museum of San Marco to take over the structure.

“But I don’t know if I’d ask for it,” said Stefano Casciu, a Culture Ministry official in charge of several Tuscan museums, including the one at San Marco, which he said did not need more space. Adding the convent would be an unnecessary expense, he said.

Whatever becomes of the convent, he said, “it would make sense only if it had a cultural use open to the public.” A hotel branch of the business association Confindustria has offered to adopt the building, giving rise to rumors of an umpteenth hotel in downtown Florence.

Giancarlo Carniani, president of the Confidustria branch in Florence, denied that was the motivation. “No, no, we want to give a hand so that the convent stays open for the friars,” he said. “It’s a monument and the state will have to keep that in mind when making a decision.”

He called the site commercially “untouchable.”

The Rev. Bruno Cadoré, the master of the Order of Preachers, as the head of the Dominicans is known, declined to be interviewed, and a spokeswoman said that, in any case, the master did not decide on the suppression of convents. The Rev. Aldo Tarquini, the provincial head on whose watch the closing of the convent was decided, did not immediately respond to a request for comment.

“If you close the convent, you are removing the soul of the place,” said D’Abramo, of the Beato Angelico association. “To suppress the convent is like dimming the lights on centuries of history.”

But any last-minute reprieve would most likely be temporary.

Mendicant orders — those like the Dominicans and the Franciscans that embrace lives of poverty — “have lost much of their original spirit, which is no longer possible to reactivate,” Sbaffoni said. “The world has changed too drastically for that.”

In Italy, “we are very few,” he said. “Increasingly fewer, and with fewer young people. There’s the famous point of no return, and for me these historic orders have reached it. There’s no going back.”