What happened to massive revenue Ohio casinos were projected to generate? 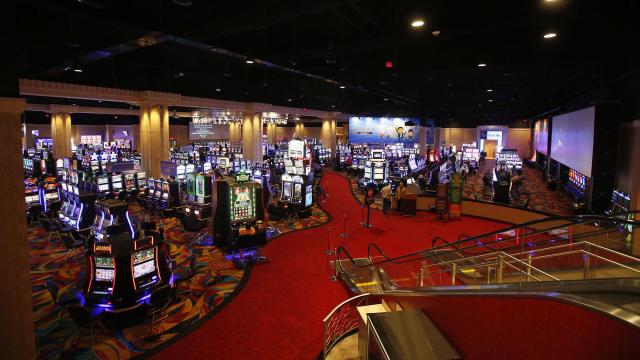 DAYTON, Ohio -- When voters agreed to allow casinos into Ohio in 2009, advocates projected that the four locations would generate $1.9 billion in revenue before taxes.

That didn't happen. In fact, casino revenues are far short of the $1.4 billion adjusted revenue projection that was made after Gov. John Kasich allowed video lottery terminals at seven racetracks, including two in the Dayton area.

The VLTs added instant competition to casinos in Cleveland, Cincinnati, Columbus and Toledo, and dug a deep hole in the possible tax revenue generated by those four gaming centers. Experts say the recession changed gambling habits as well, though racino revenues have grown steadily in recent years while the casino revenue has stayed flat.

Last year, the adjusted gross revenue from Ohio's four casinos totaled $818 million -- less than the $987 million in net revenues the seven racetracks took in from their VLTs in the most recent fiscal year, a Dayton Daily News investigation found.

Year over year, overall gambling revenue in Ohio continues to climb. But where that income comes from impacts local governments because they receive roughly half of the casino tax proceeds, while the taxes racinos pay go directly to schools.

Matthew Schuler, executive director of the Ohio Casino Control Commission, said not a single estimate about projected revenue when the casinos were pitched to the public turned out to be accurate.

Said Schuler: "All of them (the early projections) were wrong. It wasn't just the campaign (for the amendment) that overestimated."

Bob Tenenbaum, a spokesman for Wyomissing, Pennsylvania-based Penn National Gaming Inc., argues that considering the changes the state underwent -- with Ohio going from no venues to four casinos to 11 total facilities, both racinos and casinos -- early projections were challenging.

But total revenue today for all 11 venues -- four casinos and seven racinos -- isn't that far from those early projections, Tenenbaum said.

Penn's properties include the Hollywood Gaming at Dayton Raceway racino, at Needmore and Wagner Ford roads.

"We think this is an extremely healthy market," Tenenbaum said. "And we think it's being well served."

In 2009, voters approved a constitutional amendment allowing casino gambling in Ohio, but the first casinos did not open until two-and-a-half years later. The Horseshoe Casino Cleveland opened May 14, 2012, followed by Hollywood Casino Toledo, which opened May 29, 2012.

The constitutional amendment was followed by an executive order allowing video lottery terminals at racetracks or "racinos."

He adds: "It still to this day has an impact. You can look at Las Vegas, and they will tell you at each casino: They are getting the same amount of visitors that they had before -- they're just not spending as much."

The consequences of that recession were so severe that many Ohioans are simply not willing to believe that it won't happen again, Schuler said. Millennials, in particular, were marked forever by the experience of families.

"It taught them lessons that are lasting more than just a few years," he said. "I think it has changed behavior."

Asked whether addition of racinos somehow diluted the revenue pool for the four casinos, Schuler said: "It's more complex than that."

But an executive for Jack Entertainment, which owns the Jack Cincinnati Casino and other properties, said the racinos have had an impact.

In an emailed response to questions, Mark Tricano, Jack senior vice president of Northeast Ohio operations and general manager, said: "The simple fact is that the state gaming revenue is now split between eleven locations rather than the four casinos as originally contemplated."

Ohio gaming supports nearly 20,000 jobs statewide and has a total economic impact of $3.6 billion, according to research presented by the American Gaming Association in May at Miami Valley Gaming in Lebanon.

Schuler notes that three of the state's casinos were new builds and one (the former Higbee's department store in downtown Cleveland) was a renovation.

Now, it's the Jack Cleveland Casino, re-branded in 2016 from the Horseshoe Casino Cleveland.

One of the casino projects transformed a brownfield site of a former Delphi plant, in Columbus. Now, that site employs some 970 people.

Casino gambling all but surrounded Ohio in 2009 -- Indiana, Michigan, Pennsylvania, West Virginia (but not Kentucky) had various offerings. It was an easy drive for Ohioans to visit an out-of-state casino.

Part of the 2009's campaign's promise was an effort to keep jobs and money in the Buckeye State.

"We do know that after the casinos opened, looking at the revenue reports from all of your surrounding states, that their (other states') revenue did go down," Schuler said. "That money was being repatriated to the state of Ohio."

"This does seem to be working well," Tenenbaum said of the overall business venture.

Penn serves four Ohio communities, with more than 2,000 employees, and operations that he argues have revived the Ohio horse racing industry.

He finds racinos to be a "somewhat complementary market" to casinos.

"The fact that all these operations are able to exist I think is evidence that the Ohio gaming market has customers who want to play in different ways and in different settings," Schwartz said in an email.

The University of Cincinnati in 2009 issued a report that said the casino ballot proposal each year would generate "nearly $11 billion in total economic impacts and more than $4 billion in fiscal revenues for the state of Ohio during construction and the first five years of operation."

Those projections have fallen well short as the state has received just over $1 billion in tax revenues since casinos opened. Montgomery County is on track to bring in a little more than $3.1 million from the county fund this year, said county commissioner Dan Foley.

"For the amount of money counties have had removed from the local government fund, the money that we're talking about is not a game changer for us by any stretch of the imagination," Foley said.

What about the impact of casino gambling on personal lives?

"It was a priority for the members of our commissions and our staff ... that we had plans in place to make sure that every Ohioan who has a problem with gambling can get treated for that problem free of charge," Schuler said.

Two percent of casino revenue go to the "problem casino gambling and education fund," used for education, treatment and prevent programs across the state.

And Ohioans can "ban" themselves from casino properties for one year, five years -- or for life.