What Am I if Not Employed? 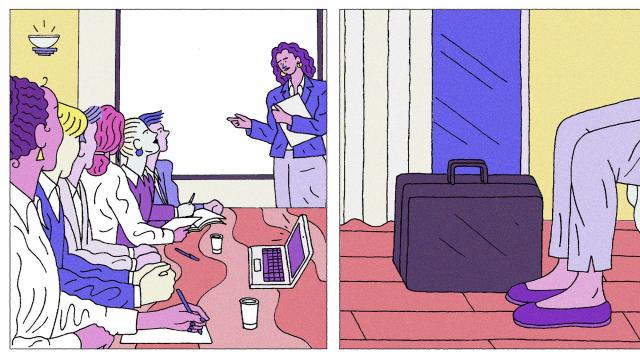 “You’re so brave,” my friend said when I told her I was going to take some time off after leaving my job as an executive of a hotel chain.

Most people, rather than expressing support, wanted to know why I’d made that choice and where I was “going.” When I’d say that I was simply looking for some downtime, some of them mellowed empathically, while others assumed I was keeping my next move a secret. Some were worried that after my sabbatical I’d struggle to rejoin the workforce.

I had officially announced, in January, that I was going to leave my job — but would stay on a few months to help with the “transition.”

Initially, I thought I might go straight into another role. I began discussions about a job that would take me from Chicago, where my family and I had moved for my current role, back to Manhattan, the place I consider home.

First, my 18-year-old son, Nicky, who is not the most emotionally expressive person, turned to me one morning and said, “Mom, I will totally understand if you take another job in New York. I just want to say that if you do, I’ll miss you.” He had one year of high school left, so a job in Manhattan would mean that he and my husband would stay in Chicago while I commuted during the week.

Then, as I was really thinking about jumping back in, I became riddled with anxiety and short of breath. My body was sending me a message.

I have been working at a crazy pace since the age of 16, when I convinced my parents to let me take a job at a travel agency. Working made me feel productive, and I love feeling productive. “You’re just one of those people who likes to work,” my sister often says. “It’s clearly who you are.”

My career choices have required long hours and lots of travel, and after a while I became addicted to being “on.” There were years I lived in New York but commuted to D.C. Later, I spent six months commuting between New York and Chicago.

And guess how long I took off between those two jobs? One day.

I finished up at the first job on a Friday, took Saturday off and then showed up in Chicago to start my new job on Sunday.

This is not something I recommend.

But for a long time, I operated at that speed, allowing my drive to push me forward. I still love being part of a team that makes things happen.

That “Mom, I’ll miss you” — along with my palpitating heart — was enough to stop me in my tracks.

My decision was made: I was going to take a break from work. I wanted to regain my breath and spend time with my son, who was going to leave for college before I knew it, and the rest of my family.

What has struck me since is how often I’m asked what I’m going to do next. I can honestly say I don’t know; I promised myself I wouldn’t explore that question right away. I understand why it’s difficult for my friends and loved ones not to ask, though. The expectation is that I will always have a plan. People — or, at least, the people in my world — aren’t super comfortable with the idea that no plan is my plan.

A recruiter tracked me down to discuss a potential role. When I told him I was planning to take some time off, he said, “Can I give you some unsolicited advice?” Without waiting for my response, he said, “I really wouldn’t recommend that. It will be hard to get back in.”

Here’s the thing: I have stepped out once before — kind of. I ran a consulting business for five years. There are plenty of people who’ve reassured me that all would be OK if I chose this path again.

It’s not that I don’t have self-doubt. Of course I do. I have long surrounded myself with people for whom identity and work are intertwined. The first question I often get asked at a party is “What do you do?” Replying, “I’m unemployed,” usually leads to an uncomfortable silence.

In my previous life, I was often asked about the work-life balance — that nagging question that working people, but especially women, are so often forced to parse. I was always forthright in my answer — that I don’t think “balance” is the right word, because it’s nearly impossible to have a demanding job and have balance. The word is a setup; it serves only to make you feel badly when you realize you can’t “have it all.”

In my mind, life is about choices and chapters.

In some chapters, you double down on work; in others, you step away. This ends up being something you negotiate with other parts of your life.

This chapter, for me, is a choice to prioritize other things in my life — like spending time with my grandmother and being present for my son’s final year at home. Also, I was tired of joking that “I had once been an interesting person with many interests.” It was time to rediscover those interests.

I remain uncertain about what awaits me next. But I do know that the time away has been a gift and a privilege — one that years of hard work and generous compensation has afforded me.

What I wouldn’t call me is “brave.”