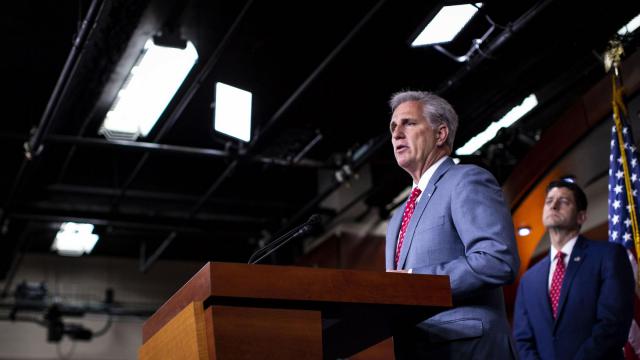 WASHINGTON — House Republicans, fighting hard to retain their majority and uncertain about who will lead them after Tuesday’s elections, have deferred the messy work of planning a legislative agenda until after the votes are tallied next week.

And at the White House, where aides privately view House Republican chances as slim, postelection planning has revolved around imagining a world in which Democrats are in control.

“This is inevitably a referendum on what the administration has done and on the state of the economy,” said Rep. Tom Cole, a senior Republican from Oklahoma. “You can lay down an agenda, but I don’t think it would make too much difference.”

Continued Republican control would defy historical odds and the expectations of both parties. But if they maintain their grip, Republicans would claim a conservative mandate to cut taxes, chip away at the Affordable Care Act and shrink federal spending. Further down the list: giving President Donald Trump some bipartisan legislative accomplishments before his 2020 re-election campaign.

A Republican victory at this point would be “an affirmation of Trump’s agenda,” said Andrew Roth, the top lobbyist for Club for Growth, a conservative advocacy group.

— First things first: Who would be in charge?

With the retirement of Speaker Paul Ryan and dozens of the chamber’s most senior members, Republicans will have a dramatic makeover next year regardless of the electoral outcome. Who replaces Ryan and the size of the majority will shape what is possible.

Ryan’s most likely successor, his No. 2, Rep. Kevin McCarthy of California, has used the last year to position himself as one of Trump’s staunchest supporters on Capitol Hill and would most likely work hand in glove with the White House.

If Republicans retain control with only the slimmest of majorities, McCarthy’s highest-profile challenger within the party, Rep. Jim Jordan of Ohio, could extract concessions for the members of the conservative Freedom Caucus, including important chairmanships and other committee posts. That would push the agenda to the right.

But there could be a countervailing force: Republicans could hang on thanks to a handful of moderate lawmakers in districts where Trump is unpopular, and those lawmakers, scattered around suburban districts that will be competitive again in 2020, could try to move the party toward the center.

In that case, the focus could be on bipartisan initiatives like infrastructure spending and an overhaul of the criminal justice system. They could at least complicate efforts to repeal the Affordable Care Act or squeeze entitlements like Medicare and Medicaid.

— Trump wants more tax cuts. He could well get them.

Amid that uncertainty, Trump is taking an active hand in setting the House’s priorities. Example No. 1: the president’s recent announcement — blurted out on the campaign trail — that Republicans would “put in” another 10 percent tax cut for the middle class in just a matter of days. Republican policy writers on Capitol Hill appeared to have no idea what Trump was talking about, and their own tax plans for the next Congress were focused on making last year’s tax cuts permanent, not enacting new ones.

But the party quickly went to work trying to write fiction into reality. “We will continue to work with the White House and Treasury over the coming weeks” to develop a plan, said Rep. Kevin Brady of Texas, chairman of the Ways and Means Committee.

More likely, Trump’s declaration will serve as a blueprint for tax writers. Brady is intent on making permanent the individual tax cuts that passed last December but will now expire after 2025. Brady has said the party would use the same parliamentary legerdemain that ensured passage of the first tax cut to make sure the next one can escape a Democratic filibuster in the Senate.

— Obamacare: Death by a thousand cuts, not repeal

In 2017, Republicans fell short of repealing the Affordable Care Act. With a far narrower majority in the House and the bill’s popularity on the rise, the party would be unlikely to take another run at outright repeal, officials said. But they could chip away at its remaining pillars.

Republicans used last year’s tax bill to remove the law’s penalty on people who do not secure insurance. With two more years, party officials say, they could try to eliminate the so-called employer mandate, removing penalties for employers who do not offer coverage for their employees.

Others would push lawmakers to try to go further and cut at the heart of the law’s popularity: its protections of those with pre-existing conditions.

“Republicans need to grow a spine and confront that debate head-on,” said Roth, who believes Democrats have scared Republicans into abandoning their position that the “heavy federal mandate” is driving up insurance costs.

With a presidential election looming, Republicans also face a consequential choice: work with Democrats to achieve some policy victories and lift Trump, or take advantage of what could be a dwindling period of unified Republican control to press rightward.

Lawmakers in both parties believe there is at least a chance that a Republican House and Senate could pass bipartisan legislation overhauling incarceration laws and prison sentencing, which would include changes to mandatory minimum sentences and programs meant to reduce recidivism.

“The first thing you need to be is gracious,” said Sen. Lindsey Graham, R-S.C. “Thank you very much to the American people for allowing us to stay in charge. You need to challenge the Democrats to find common ground.” Conservatives argue that an election victory would give Republicans their best chance to address the ballooning federal deficit without raising taxes; they should prioritize making long-sought adjustments to Social Security, Medicare, Medicaid and welfare programs.

Leadership aides and outside policy advisers said programs for the poor may be the most politically palatable for the time being. Even Cole, a senior member of the Appropriations Committee who said he would like to see a serious attempt at entitlement changes, saw little appetite on Capitol Hill or at the White House for more politically painful adjustments to programs that primarily help older Americans.

House Republicans have also pledged to fund Trump’s border wall before the end of this Congress, and the president keeps pushing, most recently with a swipe at Ryan on Wednesday.

— Finally a shot at a long-lost Trump priority?

The composition of the House would make a significant difference in any infrastructure package. If Republican moderates are able to maintain their seats, Rep. Peter T. King, R-N.Y., said he would push to invest political capital early in ambitious legislation that could incorporate some Democratic priorities and lower the temperature in the Capitol.

“It’s good for the country, it’s good for the economy and it’s one way we can get Schumer and Trump in the same room,” he said, referring to Sen. Chuck Schumer, D-N.Y., the minority leader.

But if moderates are wiped out, a conservative-dominated majority would most likely embrace a less-costly plan that relies heavily on private investment to build roads, bridges and broadband capacity, pairing it with welfare changes putting into place new work requirements to offset some of the cost. The resulting legislation would be unlikely to win Democratic support, but framed as a broad work bill, it could be pitched to disparate parts of Trump’s coalition.

“You need to try to figure out what these policies are that address the big governing coalition that we are trying to hold,” said Tim Chapman, executive director of Heritage Action for America, a conservative lobbying group.