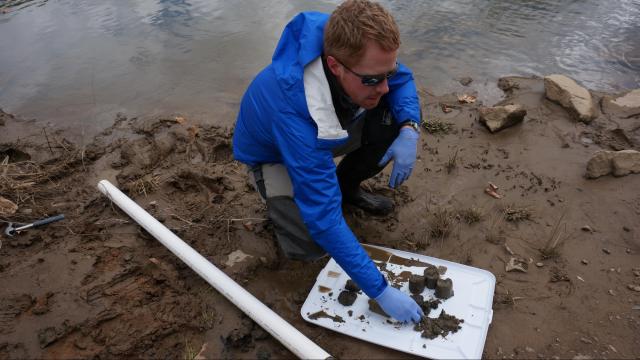 Raleigh, N.C. — Limited testing by state environmental regulators at three Charlotte-area coal ash sites appears to indicate that nearby Duke Energy ponds are not the source of well contamination.

As part of continued groundwater testing associated with coal ash cleanup, the Department of Environment and Natural Resources tested 24 private wells far enough away from Duke's Allen, Buck and Marshall plants to provide "background" measurements of heavy metals and other harmful elements. DENR said Monday that the sites contained some of the same trace elements as wells much closer to the coal ash ponds.

DENR spokesman Mike Rusher said that, because these background wells are disconnected from groundwater near the ash ponds, the results could point to naturally occurring contamination. But he said that determination won't be definitive until regulators complete their assessment with additional data.

"These 24 wells are definitely a piece of the puzzle, but the bulk of the work is going to be done as a result of the site assessment," Rusher said.

In a press release Monday afternoon, however, Duke was less equivocal.

"The State has now tested wells near coal ash basins and wells that are far enough removed from the basins to be unaffected by them," the release said. "The new results validate what we and others have been saying – the constituents found in the water samples occur naturally at various levels across the state."

Of the 24 private wells tested in DENR's so-called reconnaissance sampling, 20 owners received do-not-drink recommendations from state health officials. Half the wells exceeded screening levels for the carcinogenic hexavalent chromium, while another seven exceeded levels for vanadium. Another well tested above the screening level for iron and manganese.

Four samples needed to be retested for hexavalent chromium because the original labs weren't able to detect it with enough precision.

None of the wells exceeded federal drinking water standards, which are for the most part less stringent than state groundwater requirements and health screening standards.

DENR officials won't release the levels of contaminants in the reconnaissance wells until they notify well owners.

Tests have found similar elements in the water supply at hundreds of other private wells at Duke's plants across the state, an effort tied to the state's 2014 Coal Ash Management Act.

Of the 285 wells with results back in to the state as of July 8, about 93 percent show water that exceeds federal or state health standards for some trace elements. After evaluations by state health officials, more than 200 wells have received "do not drink" recommendations.

Many of the elements that have prompted the state to issue do-not-drink recommendations occur naturally in soil and geologic formations absent any intervention from humans.

State officials are also in the process of retesting dozens of wells for hexavalent chromium.