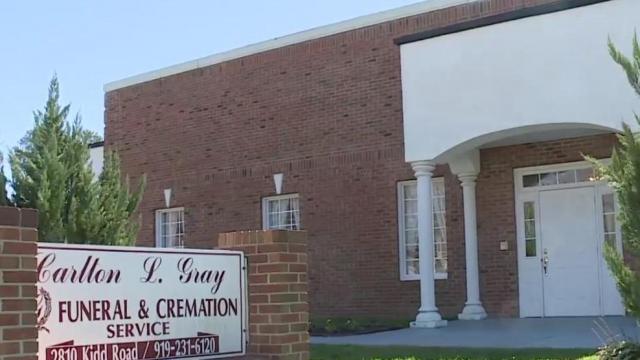 RALEIGH — After three weeks, a Raleigh funeral home still has no death certificate for a woman who died at home and who's estranged from her family.

The 66-year-old woman arrived at the Carlton Gray Funeral and Cremation Service on Feb. 7 after having died of unknown causes.

Carlton Gray, the funeral home owner, says the woman lived with her common-law husband and had been cut off from her children and other relatives.

He says the doctor who last treated her doesn't have enough information about the woman's condition and is reluctant to fill out the death certificate.

"So now we have a situation where we have a deceased person and the doctor that is supposed to sign the death certificate refuses to sign it until an autopsy is performed," Gray says.

But the state medical examiner has declined to perform an autopsy because the woman's death not meet the criteria.
Under state law, an autopsy is required when the death of a person results from "violence, poisoning, accident, suicide or homicide" or "occurring under any suspicious, unusual or unnatural circumstance."

Gray cannot cremate or otherwise inter the body until the certificate is filled out and signed by a physician.
He's charging Wake County $20 a day to hold the remains.

"Right now, we don't have any recourse," Gray says.

Scott Kirby, associate medical director for the North Carolina Medical Board, says the agency sees cases like this a couple of times a month. The board's online newsletter spells out its position, saying doctors and physician assistants "have an obligation to complete the death certificate for their patient to the best of their ability and in a timely manner."

Kirby says the state statute on death certificates is "many years old," written at a time when doctors had more direct interaction with their patients, and should be updated to clear up confusion.

"There is a concern about inaccuracies on death certificates, but sometimes it is just simply not possible to know with certainty the actual cause of death," Kirby says. "It is permissible to complete the death certificate using 'possible' or 'probable' as a modification."

He says the board has no intention to discipline doctors who complete a death certificate without knowing all the details of the person's medical condition or cause of death.

"It is not possible to conduct an autopsy on a majority of individuals who die unattended by a physician," he says.

Gray has filed a written complaint with the state Medical Board in hopes of compelling the doctor, or another party, to sign the certificate. He says it's anyone's guess how long he'll have to store the remains.

"When you don't have a death certificate, basically everything stops," Gray says. "Someone's got to be the one to say, 'Hey, you've got to sign.'"