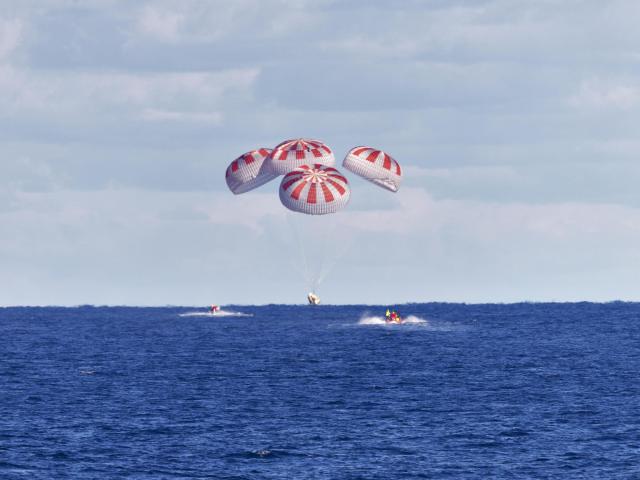 SpaceX’s Crew Dragon is guided by four parachutes as it splashes down in the Atlantic Ocean about 200 miles off Florida’s east coast on March 8, 2019, after returning from the International Space Station on the Demo-1 mission. The uncrewed spacecraft docked to the orbiting laboratory on March 3, following a 2:49 a.m. EST liftoff aboard a SpaceX Falcon 9 rocket from Launch Complex 39A at NASA’s Kennedy Space Center in Florida on March 2. Crew Dragon made 18 orbits of Earth before successfully attaching to the space station. The spacecraft undocked at 2:32 a.m., March 8, splashing down in the Atlantic Ocean at 8:45 a.m. SpaceX’s inaugural flight with NASA’s Commercial Crew Program is the first flight test of a space system designed for humans built and operated by a commercial company through a public-private partnership. NASA and SpaceX will use data from Demo-1 to further prepare for Demo-2, the crewed flight test that will carry NASA astronauts Bob Behnken and Doug Hurley to the International Space Station later this year.
Reporter: Tony Rice