In July, WRAL News reported on a single mom in Durham who had been living in an apartment so moldy that mushrooms were growing inside. Generous viewers donated $12,000 within a few days to help the mother and her four children. Now, her landlord is demanding $17,000 in repairs or she will be evicted in 10 days.

After escaping domestic violence and homelessness, Tia Hoyt found herself trapped in deplorable living conditions, in a rental home paid for by a Durham Housing Authority voucher. 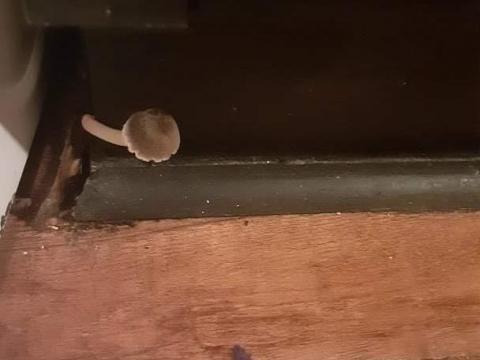 At the time, Hoyt did not believe her landlord should be on the list of approved housing for the DHA's vouchers because of the terrible living conditions – including issues with her hot water, water bubbling up from underneath the kitchen floor, mold, a broken stove and a broken refrigerator. The home is inspected each January, and each year it fails inspection, she said.

After thousands of dollars in donations, Hoyt's story seemed to have a happy ending. However, now her landlord is threatening to evict her if she won't pay for $17,000 worth of repairs.

Hoyt does not believe she should be responsible for these repairs, and the Durham Housing Authority agrees with her, according to emails Hoyt read to WRAL News. They believe the landlord should cover the repairs.

Satinder Dayal, the landlord, however, has a different story. In an email to Hoyt, she says most of the bad conditions were Hoyt's fault for not ever reporting the damage or issues.

"You failed to change the air filters every month. As a result, AC condensation pipe got clogged," wrote Dayal.

Dayal also wrote about the flooding Hoyt complained of, saying, "The first time I got notified about this leak was by a WRAL reporter." According to Dayal, the amount of water dripping would have taken weeks to flood the house, meaning Hoyt neglected the leak for a very long time -- but then contacted the news and legal services, rather than ever telling Dayal.

"You allowed the mildew to grow on utility closet wall, when the damage was seriously visible, then you decided to call Neighborhood Improvement Services, WRAL, Legal Aid and Durham Housing Authority," wrote Dayal.

Dayal also accused Hoyt of intentionally bring a mushroom from outside and 'planting' it inside the house for a photo.

"You purposely brought a mushroom from outside and placed it next to the kitchen cabinet just to take a picture in order to exploit. No one has witnessed live mushroom plant growth in the kitchen," she wrote.

Although Dayal said she was never notified of these issues, Hoyt says she did tell the landlord about all the issues as they occurred – and showed WRAL texts and emails she sent to the landlord dating back to 2019.

Hoyt believes Dayal is trying to evict her now because of the media attention and the GoFundMe donations. She believes the landlord saw how much money she raised, and now wants it for herself.

Hoyt is also working with Legal Aid of North Carolina, who says they are familiar with this particular landlord and have had cases against her in the past.

Legal Aid says they cannot speak about this case directly, but said, "Generally speaking, landlords are responsible for making repairs involving plumbing and appliances that come with the rental property, unless the landlord can prove that the tenant caused—intentionally or through negligence—the damage in question."

"Legal Aid is something for free for the poor people, and they use it," said Dayal. "This is part of the business."

Hoyt's family has been desperately searching for a new rental home since WRAL News' first story aired in July, but is struggling to find one that will accept the DHA's voucher program.

"Within 10 days we'll probably be homeless," said Hoyt, "Because I haven't found anywhere for us to go."