Durham, N.C. — Two Durham voting sites were affected by a Duke Energy power outage on Saturday morning. The polling places at North Regional Library and Mt. Sylvan United Methodist church were running on a generator Saturday morning due to the outage.

Officials said that wait times are extended at these locations but "voters have been processed" since the location opened at 8 a.m.

Power was restored in the area sometime around 10:30 a.m.

Duke Energy reports that a car hit a pole causing the outage. Durham City Councilman Mark-Anthony Middleton said that crews are unable to determine if foul play was involved yet. 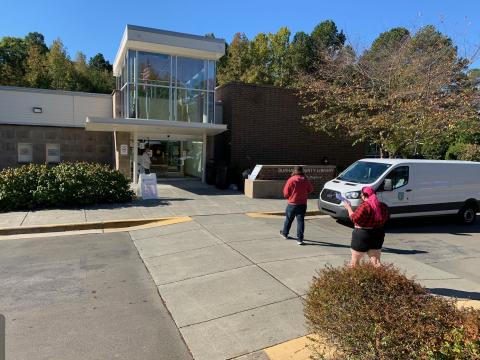 "We are investigating, we are deeply concerned," Middleton said. "But what I will say to voters is make a contingency plan. Do not be dissuaded, do not be discouraged."

At the two polling sites the wait times are as long as 90 minutes, according to Durham's early voting site locator.

Polling centers in Durham open at 8 a.m. this Saturday and close at 7:30 p.m.