Goldsboro, N.C. — A Wayne County woman is pleading for the return of a litter of puppies that she says were stolen from her home just days before Christmas.

Amber Hinson said she came home two days ago to find that someone had broken into her home in the Rosewood neighborhood and taken six of seven pups that were born on Nov. 21 to her dog, a Labrador, and a pug owned by her neighbor.

"I was very surprised," she said. "I didn't think anyone would steal puppies."

Three of the puppies that were taken were males and three others were females, Hinson said.

The Wayne County Sheriff's Office is investigating the case, but they were not available for comment on Monday.

Hinson said in addition to the pet pooches that were taken, a .22 caliber rifle, some Christmas presents and a small safe containing paperwork were also taken during the home break-in. 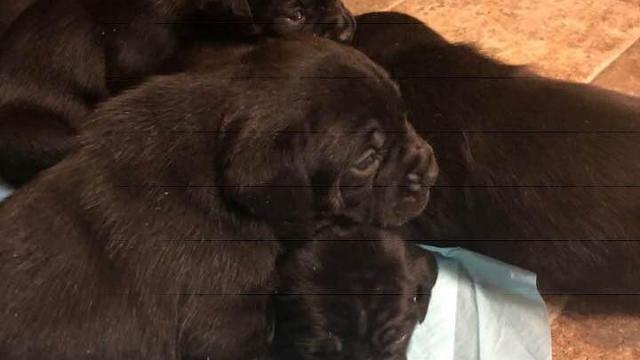 "It is a horrible feeling knowing somebody just came into my home after breaking the front door," Hinson wrote in a Facebook post. "My sense of security will not be the same for a while."

Hinson's Facebook post and that of a friend telling people about the theft has been shared over 3,000 times and generated responses from sympathetic social media users from as far away as Alaska.

"Social media has been great," she said, referring to its ability to spread the word about the stolen pups. "I'm praying for a Christmas miracle."

Anyone with information about the stolen animals was asked to call the Wayne County sheriff.